Keep Your Hands Off Eizouken! Episode 3 Review: Reach for the Stars 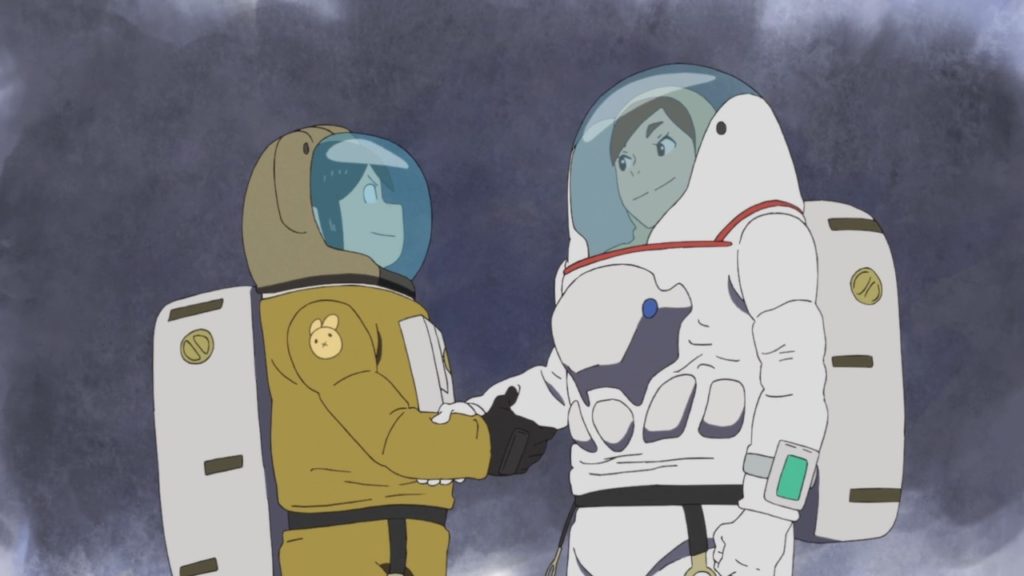 Now that the Motion Picture Club or ‘Eizouken’ has been set up, at least for the time being, it’s time for Midori, Kanamori, and Tsubame to hunker down and do some work. Keep Your Hands Off Eizouken! episode 3 attempts to track the initial stages of the development of the club’s first short film, but the hyperactive nature of two-thirds of the main trio means that there’s still plenty of room for irreverence along the way. The result is an episode that is part production drama, part imagination dreamscape and one of the most enjoyable of the series thus far.

In terms of adaptation, this episode follows the basic structure set out in chapters 4 and 5 of the original manga by Sumito Owara but sees fit to insert several new scenes and extend already-existing ones when necessary. While this does mean major diversions from the source material as a result, these diversions are mostly effective and only serve to better present the appeal of the original manga in animated form.

Although this episode might be nominally about starting production on the Eizouken’s first short film, that’s easier said than done. Try as she might, Kanamori isn’t quite going to be able to pin down Midori and Tsubame and get them to do some proper work, and nothing showcases this more than the first part of Eizouken episode 3.

This first part sees the main trio attempt to repair their ramshackle clubhouse and think about how they are going to shore up their already-tenuous existence as a school club. But Tsubame and Midori are more interested in playing spaceman than anything else – much to the frustration of Kanamori, who is actually trying to achieve the task at hand. 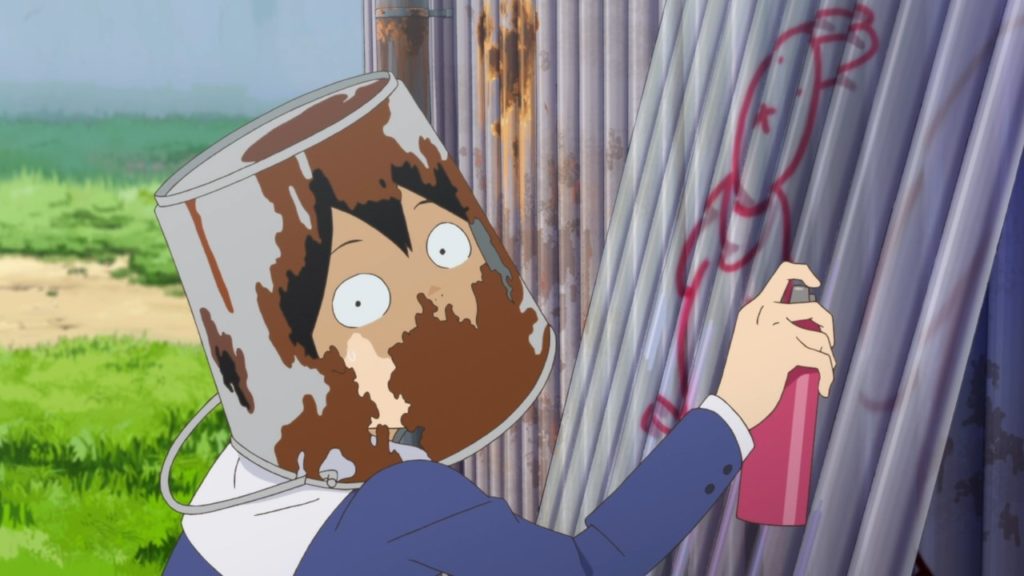 By now, the dynamic of the main trio should be becoming clear. Kanamori is the level-headed adult figure of the group, always trying to keep the others in line and on task. Midori is scatterbrained and eccentric, always seemingly in a world of her own and full of ideas. Tsubame is excitable and passionate, willing to go along with anything as long as it interests her – including, but not limited to Midori’s flights of fancy: a spaceman-themed version of which is so prominent in the first half of this episode.

Much of what gets across the core dynamic of the trio and the differing personalities of our main characters in this episode is simply transplanted from Sumito Owara’s original manga. Just like in last week’s episode, character dialogue in Eizouken episode 3 is excellent, serving to inform the reader of each characters’ personalities in a subtle way. One of the best examples of this is the scene where the three girls ‘mourn’ the loss of the money that they earned from submitting the home video of Midori to a TV show: Kanamori wishes for more, Tsubame doesn’t understand why her friends are so worried about some chump change, and Midori is more focused on the raccoon that suddenly appears outside the clubhouse. 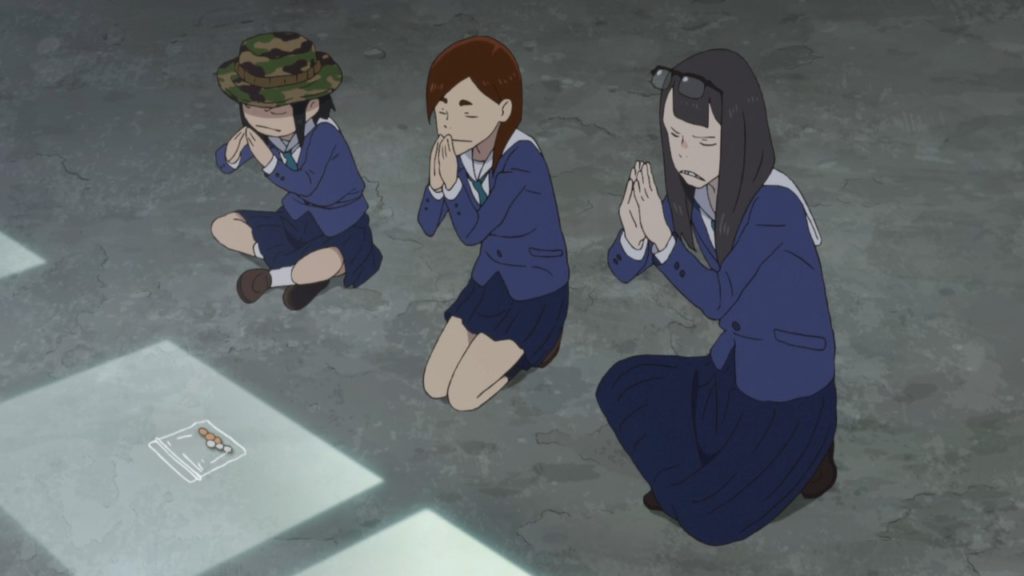 All of this is taken directly from Sumito Owara’s original manga, so too much praise can’t be heaped on the anime adaptation. Nevertheless, there are the voice actors, who are doing wonders with these lines, and Science SARU have changed the story from the source material in interesting, effective ways: the spaceman sequence, one of two flights of fancy that takes place in this episode, is much longer in the anime than it was in the original manga (where it only took up a couple of panels). It also features more of a distinct back-and-forth between reality and imagination: the debris that heads towards Midori and Tsubame outside of the imaginary clearly symbolizes Tsubame’s need to pee, and her entrance into the imagination sphere is clearly linked to the fact that she joins Midori on the roof on Kanamori’s orders.

Of course, that’s not even mentioning the fantastic animation which is present all throughout this episode – it hardly stops moving, in fact. But such adaptational touches are much obliged given the frantic nature of the original manga, and also do wonders to cover over the fact that this episode only adapts two chapters of the manga. Without extensions and alterations – as well as the anime-original scene where Tsubame and Midori put up a sign at the beginning of the episode – the pacing would’ve suffered, so let’s thank our lucky stars that a lesser studio than Science SARU isn’t on this adaptation.

But, as I said, the spaceman sequence featuring Tsubame and Midori is actually a deviation from the true aim of this episode, as well as Kanamori’s own priorities. It’s only a matter of time before the faculty come for the Eizouken after they find out that they’re making anime, and in this sense, there’s a desperate need to get the ball rolling on some actual animation work. So, once the two freethinkers are done with their heads in the clouds, Keep Your Hands Off Eizouken! episode 3 shifts gear decisively in its second half to focus more on production drama. 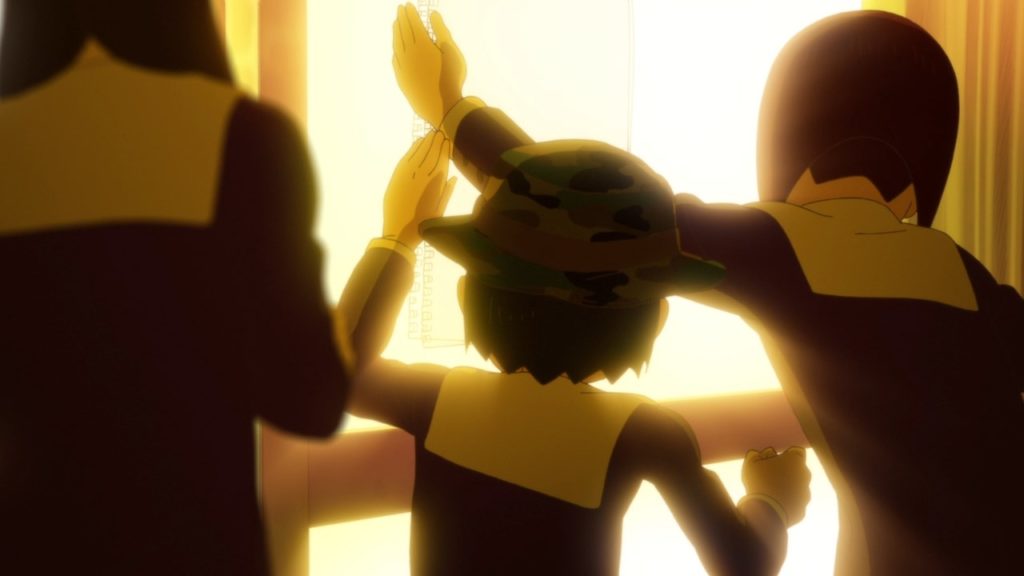 Nevertheless, this isn’t production drama along the lines of something like Shirobako or Bakuman, both of which attempt to stick closely to the realities of their respective industries. Eizouken’s production drama has always been unique in the fact that it is largely character-driven and very emotional in substance, which puts it at odds with the more documentary-like aims of many series of its ilk. Plus, there’s the fact that our characters are not professional, instead they’re amateurs, which necessarily means that their production environment isn’t necessarily representative of the industry.

There’s no better example of this than the second half of Eizouken episode 3, where Tsubame and Midori’s differing approaches to animation come into conflict. Midori is all about technical design and detail, whereas Tsubame is all about motion and fluidity, and trying to mediate between them both is Kanamori, who has the material realities of their limited production in mind: they need to create something that is as impactful as possible while also being as easy to make as possible.

What the trio eventually comes up with is a compromise between the two: a short film where a machete-wielding girl goes up against a tank in a literal and figurative clash between the two artists’ respective approaches. 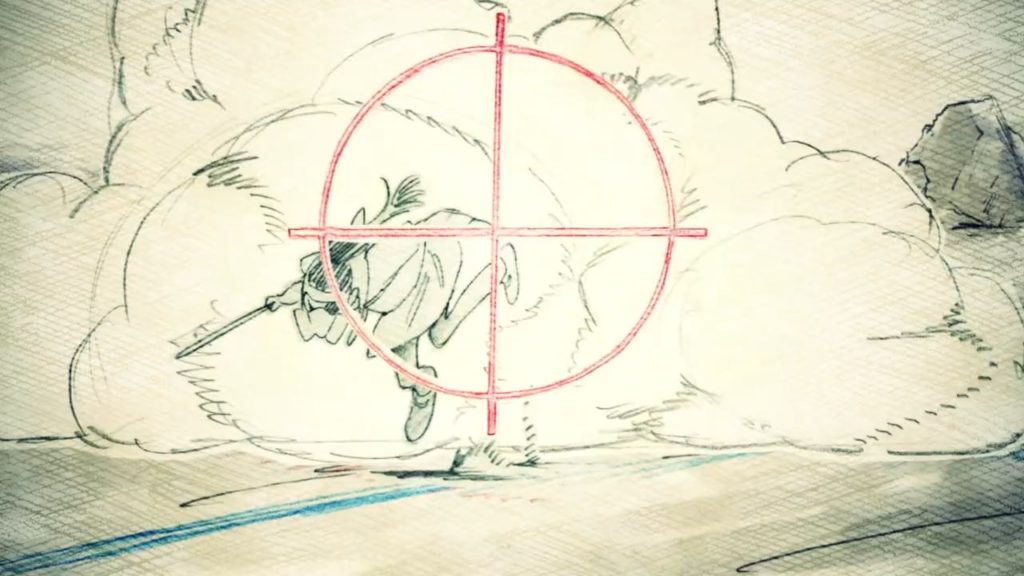 Once again, this is excellent character writing in the form of narrative contrast that is translated directly from the original manga into animated form. But, then again, the work of Masaaki Yuasa and Science SARU does shine in this second half: not only does seeing the girls’ different visions of animation in the medium itself do wonders for viewer comprehension, there’s also the fact that the studio has taken several steps to ensure that the explanations delivered by the two animators are as engaging as possible: Midori explains two concepts sheets in person during the episode, and the whole trio literally ‘step’ through and explore Midori’s numerous ideas for a short film.

The only downside to the studio’s work is the fact that the team missed out or understated several parts of the original in the second part of Eizouken episode 3: while Midori’s production tactic of replicating one explosion animation is duly included, there are two tidbits involving the use of timing and scrolling backgrounds to cut down on production time that have been, quite bizarrely, left out.

Furthermore, the tension between Midori and Tsubame’s differing visions of their art – the fundamental clash between more commercial ‘anime’ and more artistic ‘animation’ – isn’t nearly as clearly defined in the anime as it was in the manga, where it is the subject of a page’s worth of discussion in chapter 5. Perhaps this would’ve dragged the pacing of the episode down if it was included, but I can’t help but worry that missing out on this crucial issue might hurt the course of the anime’s narrative in the future. We’ll just have to wait and see.

Eizouken Episode 3: Reaching for the Stars

All in all, however, Eizouken episode 3 was another fantastic episode in what is shaping up to be a fantastic adaptation. All three of the main characters are charismatic and engaging, helped along by excellent writing and dialogue, and the various adaptational touches by Science SARU and Masaaki Yuasa go a long way in translating the source material to screen. The only problems I have are nitpicks based on my knowledge of the original manga, and will surely go unnoticed by the average viewer. For this adaptation, the only way is up – let’s get excited for next week.

You can watch Keep Your Hands Off Eizouken! episode 3 via Crunchyroll.

Science SARU via Crunchyroll / Shogakukan
Keep Your Hands Off the Eizouken!Masaaki YuasaReviewScience SARU
Join Our Discussions on Discord
Join Now