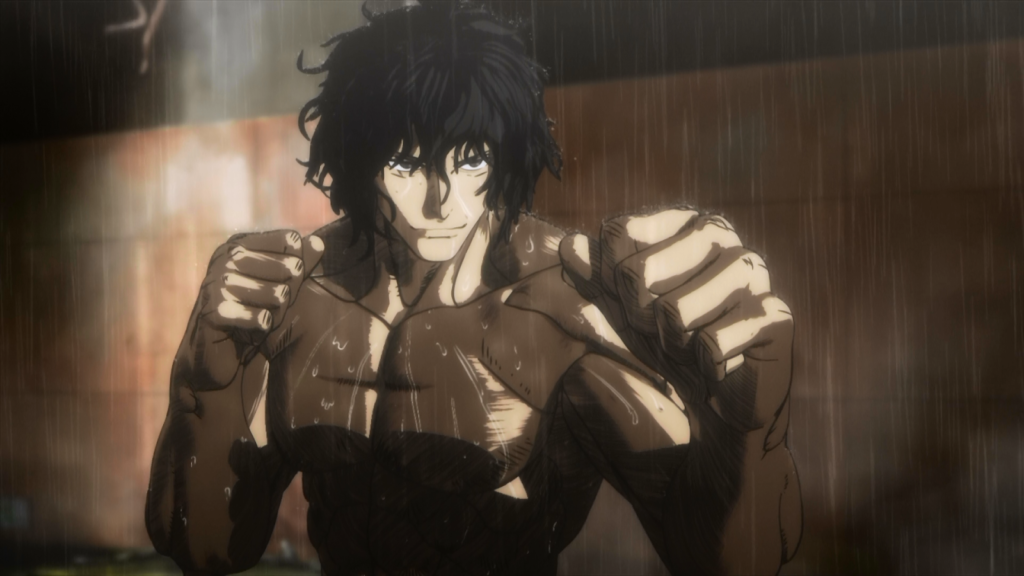 I initially expected Kengan Ashura to be something like Baki. I saw a lot of people make the comparison after the trailers came out but I was unsure if people made this comparison solely because of the recent Baki series which was also available through Netflix.

They’re both series focused on brutal martial arts and one of their biggest differences is the usage of 3DCG in Kengan Ashura. Many would-be instantly turned off from the 3DCG models and it’s a major criticism, but I would argue that it works out most of the time to make a savage watching experience.

Kengan Ashura started off as a manga series in 2012 and follows Ohma Tokita and Kazuo Yamashita, a fighter and the man assigned to watch over him respectively. The two become closer as they venture further into the brutal world that the Kengan Association has created.

Kengan Ashura would be quickly noticed for its characters and the incredible art when it came to the fight scenes. The series would also find itself compared to Baki, even when it was in manga form.

And from watching their Netflix adaptations, it’s especially easy to see why the comparison is made.

Baki starts off with a classroom of students and even a group of delinquents feeling an animalistic-like sense of fear around the main character, whereas in Kengan Ashura a frail man sees a fight between two men with inhuman-like strength and his deep human instinct for survival kicks in and causes him to travel to a brothel so he might continue the line of the human species.

From each series’ respective first episodes we see that Baki has men capable of surviving prison executions and escaping from maximum-security prisons, while Kengan Ashura has a man who can use his pinch strength to effectively make his fingers razor blades.

I could go on comparing the two, but I just want it to be cemented that although there’s plenty that sets them apart, there’s a reason why fans compare the two.

But, before we go too far into talking about it, it’ll probably help that we go over the characters first. With as many fights that occur in this anime, it’ll be easier to refer to characters by name as well.

Ohma Tokita – The main protagonist in the story, a fighter who’s chosen to represent the Nogi Group after he got in a fight and inadvertently defeated their previous representative. He strives to achieve his own personal goals when it comes to fighting through the Kengan matches.

While it becomes known that he uses the Niko style of fighting, the deeper ramifications of the style become known as the series progresses.

Kazuo Yamashita – A salaryman who works for the Nogi Group and witnessed Ohma fighting.  Seemingly through coincidence, he’s assigned to look after Ohma when the Nogi Group hires him to be their new representative.

He’s a frail older man, but with his time spent watching Ohma, he begins to exhibit more confidence and anger.

Lihito – The first fighter that takes on Ohma in a Kengan match. He’s made a name for himself thanks to his Razor’s Edge technique, which has him slicing his opponents like a razor blade with his pinch strength. He first discovered this strength when he was a kid and found he could snap a coin in half.

Kenzo Yamashita – The oldest son of Kazuo Yamashita. In comparison to his younger and more rebellious brother, Kenzo seems like someone that chose to shut themselves off from society.

His father will on occasion try talking to him through the door to his room and leave food for him outside, but they haven’t physically seen each other in years. Unbeknownst to his father, Kenzo isn’t the typical antisocial son.

Hideki Nogi – CEO of the same Nogi Group that Kazuo works for, and the one who introduces Kazuo to the concept of Kengan Matches. He has an eye for talent and recruits Ohma to test him at first. His ultimate goal is to challenge the Kengan Association itself for leadership, which leads to the Annihilation Tournament.

Setsuna Kiryu – The self-proclaimed arch-enemy of Ohma, whose only goal seems to be to have a fight to the death with him. His sadistic obsession with Ohma almost seems sexual but is revealed to be something more. He’s a dangerous fighter who’s as brutal as he is demented.

There is a wealth of other characters and one-episode fighters with incredible outlandish techniques and personalities, but I don’t want to spoil everything here. But, I definitely will be going into spoiler territory so I’ll first give you your option for watching it below!

For those on the fence, my recommendation is to watch it if you love absurd action or martial art movies and animes (if you enjoy the more outlandish ones then even better).

The 3DCG can be distracting at points (especially outside of fight scenes), but I think it really elevates the fight scenes themselves into something enjoyable for even the biggest detractors of its usage.

Kengan Ashura is available to stream exclusively on Netflix. It can be watched with a various selection of dubbing options, including Japanese and English dubs. Like most unfortunate cases with Netflix and anime, the subtitles are based on the translations from the Japanese dub so it doesn’t match any other dub when you run them together.

Since the series likes to introduce some characters and certain information about them through text on screen, you’ll need to watch with the subtitles of your choice if you want to read these parts, but thankfully the information isn’t vital.

How it Translates From Manga to 3DCG Anime

It’s only fair I start by mentioning the CG elephant in the room. As I said before, the series has been lauded for its art, especially in the intense fight scenes. It’s a major selling point for the series, and likely a major reason why fans were so apprehensive when learning that the anime adaptation would be using 3DCG.

Many view it in a negative light because they feel it leads to characters moving in a stilted and awkward manner, which is surely the last thing anybody wants to see in a martial arts anime.

Even a fighter who’s shuffling around in his own martial arts stance can look just so ever off as if they’re just not moving as fast as they should be. A common argument is that 3DCG can’t get away with the same movements that 2D animation can and at times I find myself agreeing with that.

But at the same time, I digress. There has been plenty of usage of CG in anime that has led on to create wonderful scenes and moments, and it’s only with the “obvious” usage or animes being made entirely with it that has garnered hate for CG. And over time I feel that animes that go full 3DCG have improved.

Kengan Ashura is one such anime that shows that improvement. I won’t say it’s without small issues here and there, but the fight scenes show its potential. From the movements of the fighters themselves to the wonderful editing and sounds that accentuate the force and impact of every hit, it at times feels like it couldn’t have been adapted better when it comes to the fighting.

It even manages to capture some of the wonderful moments in the manga pretty well.

In its effort to make something in-between anime and real life, it sometimes excels at making the little things better. I know I mentioned earlier that small movements can on occasion look off, but at other times they really nail it.

Characters actually move and talk at the same time as others do and additional detail alone sets it apart from so many anime. It especially helps develop particular characters as well such as Kazuo or Lihito.

It also goes without saying that 3DCG isn’t cheap, and there are various ways where it feels like they may have tried to cut corners. There are moments of panning over a character that isn’t moving while another character is talking off-screen.

Kazuo, in particular, has many scenes where he looks scared or shocked while he essentially commentates on what’s going on in a fight to himself. Another method is the character flashbacks, although I’d argue they’re better for it.

The flashbacks typically introduce a character and their specialty/martial art style, and they’re all comic-like. What’s great about them though is that they’re done in different styles. Some follow a very strict color overlay, while others have a more visual novel mixed with an old film kind of style.

I assume they’re cheaper than animating these scenes in 3DCG, but the end result is pretty nice and I appreciated them when they were shown.

How’s The Rest Of It?

Aside from the CG, the only critiques I see are a few cut characters and fights. And I do believe that can be a major change and matter a lot to fans of the manga. While it does make me sad that I missed out on some potential unique characters and surely enjoyable fights, as an anime-only viewer I’d say I was sufficiently satisfied with what I watched.

The trailers had me hoping for something that evoked similarities to the crazy martial arts films of old, and that’s what I ended up watching.

You have a whole tournament involving fighters with different martial arts styles that can fight to the death. It’s not a unique premise, but the characters, their motivations, and the corporations backing them just add on to the absurdity.

That’s a strength for Kengan Ashura: it manages to get the absurdity just right. “Kengan Annihilation Tournament” might sound like an absolute corny thing to some, but it works so well in this world.

Along with the absurdity is some also some decent varied comedy. A few fighters are super hyped up and then defeated within a second. The owner of a famous bookstore who has people represent his company in the kengan matches is almost never seen without an intoxicated smile because he’s always drunk.

A woman attacks Ohma and afterward falls in love and asks to have his babies, to which Ohma lightly places her down and just runs away.

But maybe I’m too easily pleased. I mean there’s a fighter who decided to improve a Chinese martial art that imitated the movements of animals by instead imitating a Scud missile. If you ask me why I like this anime then that’s going to come up in conversation.

“The characters are unique, the fights look brutal and intense, there’s a surprising amount of comedy that’s very well-placed, and one fighter who barely lasts half of an episode fights by imitating a ballistic missile.”

Kengan Ashura Launches On Netflix to a Knockout Success

other Jacob Parker-Dalton 5 hours ago

other Steph Donaldson 9 hours ago