The premiere of the long-awaited anime adaptation of Astra Lost in Space is finally upon us. Earlier this week I laid out the reasons why you should be excited for the show, including the fact that this animated version might just end up being the definitive version of the story. This was mostly because of the clear passion and expertise brought by director Masaomi Ando and Studio Lerche in adapting Kento Shinohara’s original manga – something which became real as Masaomi Ando and Kento Shinohara were interviewed together last week.

The Kento Shinohara and Masaomi Ando interview began with Shinohara reminiscing about how far the anime project has come, to the point where it’s finally on air. Shinohara apparently first received news about an Astra Lost in Space anime adaptation in the middle of serialization, around the time when the crew of the Astra visited the third planet on their star-hopping journey.

It’s taken a fairly long time, then, for Studio Lerche’s anime adaptation to get off the ground. Perhaps this was because how hard Astra Lost in Space is apparently to adapt into anime, as director Masaomi Ando outlined during the interview.

According to Ando, what makes Astra particularly hard to adapt is that original author Kento Shinohara packed in a lot of information into the manga’s relatively small number of pages, as well as using a lot of dense dialogue.

This makes deciding what to cut and what to keep much more difficult, as everything seems, at first glance, to be integral to the story. As a result, Ando professed in the interview that he’s constantly referring to the original manga as he writes the screenplay.

He also revealed that even a one hour special to start off the adaptation left him barely enough time to start the story in a good place with the anime’s 12 episode runtime in mind. 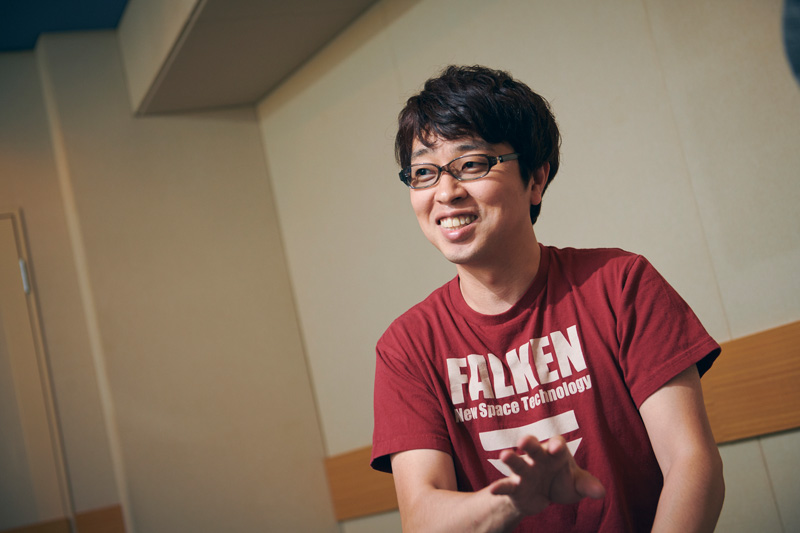 Astra’s peculiar depth of information in such a relatively short length (~50 chapters) perhaps comes from how Kento Shinohara conceived the original manga, which he revealed during the interview.

As any ambitious mangaka would do, Shinohara originally pitched Astra Lost in Space to the ubiquitous Weekly Shonen Jump, but was rejected.

This caused Shinohara to consider other avenues of serialization, ending up asking for a serialization via Shueisha’s online Jump Plus service.

He also had to seriously consider and reflect on how best to get his series off of the ground as soon as possible out of fear of cancellation, as well as because his series was being serialized via a service that had much less reach than his initial goal, Weekly Shonen Jump.

The result of this was, much to Masaomi Ando’s eventual regret, a highly streamlined mystery science-fiction story that wastes absolutely no time in playing out its narrative.

There weren’t just major changes to the narrative during Astra Lost in Space’s development, however.

Kento Shinohara also revealed during the interview that Kanata was not initially supposed to be the leader of the group, but instead was supposed to be a ‘moody boy’ that would become worthy of the role of leader throughout the course of the story.

Fears of cancellation halfway through such character development, however, caused Shinohara to take the much more efficient route of having Kanata be the leader from the get-go. 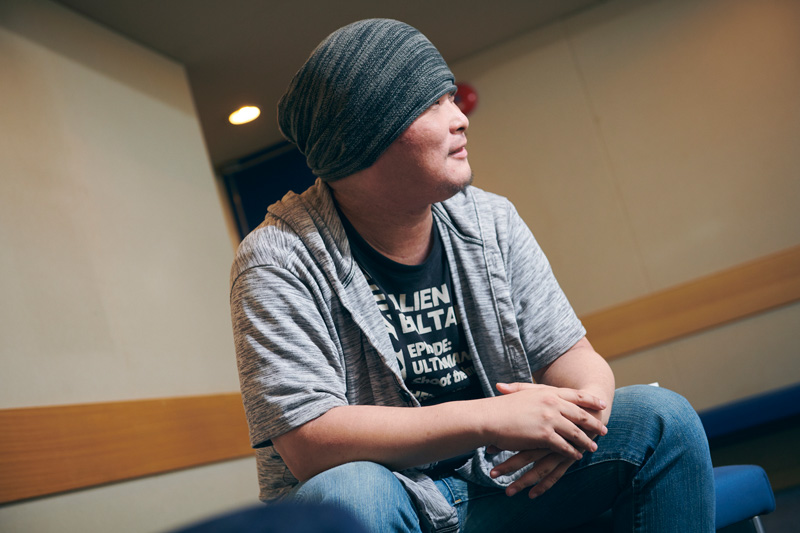 It’s not just the particular nature of Astra Lost in Space that informs a lot of the adaptational problems that Masaomi Ando discussed in the interview, however – there are also the more fundamental differences between the mediums of anime and manga.

As Ando put it, manga is a medium where the pace of a narrative can often be left to the reader – the faster you read, the faster it plays out.

This means that having a lot of information or dialogue in a manga often doesn’t disengage the reader as much as it would in a lot of anime – after all, you can just skim read it.

Anime, however, is a much more passive medium where, due to animation and voice acting, the pace of information and, therefore, of a narrative is the responsibility of the production team, which the viewer then absorbs and consumes.

This is what puts on the pressure on Ando, who is heading up the adaptation from the original Astra Lost in Space manga as director, to create the best possible version of the story for the animated medium by carefully choosing which information to bring over and which to ignore.

When it comes to animating the art from a manga, there are also several problems that prevent a creative team from simply copying the mangaka’s original illustrations.

For Astra Lost in Space, Masaomi Ando recounted in the interview that it took them “around one year” to properly rework the mechanical designs in the original manga to work for 3D animation, most notably the Astra spaceship and the crew’s retractable helmets. 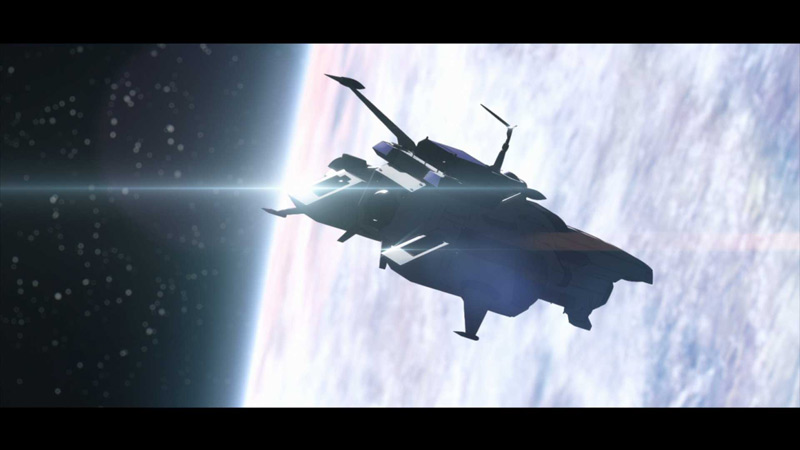 It’s not all bad though – rather, Ando talked about the Astra Lost in Space anime as a bit of a dream come true for him as a director.

Ando revealed during the interview that he first got into anime through Gundam, and as such had always wanted to try his hand at a science-fiction show.

He’s also fairly happy that he got to work with the Gundam Seed Destiny mechanical designer Arisawa Hiroshi on the mechanical designs for Astra Lost in Space, which he worked on meticulously for quite a long time.

Arisawa isn’t the only talented cooperator that Ando has recruited for the project. Character designer Kurosawa Keiko got a lot of praise from Ando, who describes him as “a little weird” but an integral part of the project as a massive fan of the original Astra Lost in Space manga who was able to effectively translate the look of the original work almost immediately into animation.

The anime is also set to feature a rather star-studded cast, such as Inori Minase as Aries and Yoshimasa Hosoya as Kanata.

Apparently, assembling such a high-profile cast was a bit of a fluke. Ando admitted during the interview that they didn’t hold auditions, rather, they reached out directly to those voice actors that they thought would fit the various roles.

The initial cast list that they came up with was fairly ambitious, and the studio was fairly certain that scheduling problems definitely wouldn’t allow for it to become a reality. But, as it turned out, everyone was free for the project, bar a few unnamed exceptions.

Both the challenging and encouraging aspects of Astra Lost in Space’s production have Masaomi Ando, in turn, rather excited in his directorial role. He’s been hard at work in trying to craft a ‘convincing’ science-fiction story, so much so that he professed during the interview that he’s ended up watching the 2014 Christopher Nolan film Interstellar quite a lot for inspiration.

Kento Shinohara, as the author of the original manga, was also keen to share his excitement for the anime adaptation during the interview.

As he put it, seeing his own characters moving and speaking is like seeing your own child “grow up and leave home” – it’s a strange feeling, to be sure, but one that comes with immense pride and satisfaction.

This is doubly the case when considering the troubled development of the Astra Lost in Space manga – the effects of which were, thankfully, more positive than negative on the finished product.

Shinohara currently doesn’t have any serializations on the go, which means that he’s pretty free right now (as he put it during the interview, he’s “recharging”).

This has meant that he’s been much more involved in the production of the Astra Lost in Space anime than he did during his last series that got an anime adaptation, SKET Dance.

At the time of SKET Dance’s anime adaptation, Shinohara was still in the middle of serialization, so ended up just leaving the studio, Tatsunoko Production, to get on with it.

With Astra Lost in Space, however, Shinohara is quite involved with the artistic side of production, often coming in to check character designs and color palettes – especially since the number of color illustrations he did of the characters during serialization was quite limited.

I do remember the initial announcement of the Astra Lost in Space anime carrying a note from Shinohara saying that he was involved with the adaptation, but the extent of which was unclear until this interview between Shinohara and Ando.

It’s amazing to see that Shinohara is not only passionate about the project but has also gotten directly involved in order to bring it in line with his vision – which means that it’s got that all-important original creator stamp of approval.

Similarly, it’s quite clear that Masaomi Ando is very passionate about the project. He revealed himself during the interview to be well aware and appreciative of the manga’s appeal and more unique qualities – even if these qualities might present more of a challenge than usual when it comes to adaptation.

All of this, coupled with the story’s own inherent good qualities from the source material, has me that much more excited for the Astra Lost in Space anime as it airs over its 12-episode run. You can check it out now via Funimation.