Khara Is the Studio Behind Your Favorite Remakes

Khara studios (usually stylized as khara inc.) has had a rough couple of years. An animation production studio that’s been trying its hardest, but seems to just have a series of bad luck moments. Ever since its inception in 2006, it hasn’t had a particularly long time to become settled and move past some of the bad things that seemingly keep going its way. Despite its name being derived from the Greek word for joy, it hasn’t been all too easy for the studio.

Khara was founded by Hideaki Anno, creator of the wildly popular Neon Genesis Evangelion. Anno’s talents go beyond one thing, with animator, director, creator, and writer all listed behind his name. Anno initially worked for GAINAX which was where he first released Evangelion.

But it wasn’t everything Anno dreamed of and eventually he left GAINAX and went on to form the khara we are familiar with. It led to the 2007 release of Evangelion 1.0.

This move initially proved fruitful for Anno, releasing a slew of both live action and animated films. Still with all this going on for the studio, it hasn’t been a smooth ride.

In late 2019 the representative director of GAINAX Tomohiro Maki was arrested. Khara was quick to announce they had cut all ties with the studio, making sure viewers no that there was no relationship between Anno and Maki.

If all that weren’t enough, the studio got hit by the COVID-19 pandemic as well. One of their biggest hits Evangelion: 3.0+1.0 Thrice Upon a Time was set to be released this summer. However, due to the pandemic the theatrical release was delayed.

To ease the pain, the theatrical poster was released to fans with the sub header stating ‘Bye Bye all of Evangelion’ leaving fans to speculate the meaning behind the cryptic message. 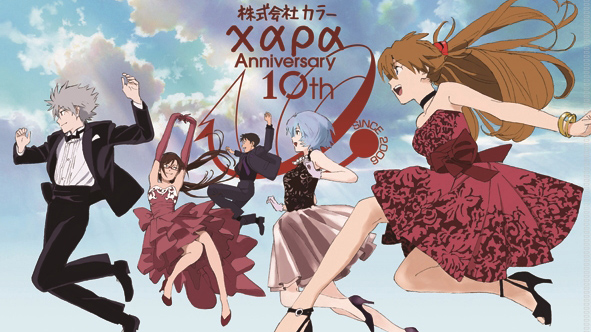 It hasn’t been all bad. In 2019 khara announced the big move over to Blender 3D software. It wasn’t the first time they had used the software, this announcement marked the complete switch to exclusively utilizing the software.

Still, with all this going on Khara managed to become a powerful player in the anime industry. Even so, they’re not as universally recognized as some of the other big players that anime fans are more aware of.

Which is a shame, because they’ve put out some of the best anime in recent years. They’re constant care and dedication to putting out quality shows has turned them into the best studio you probably haven’t heard of.

The studio thus far has released three Evangelion films, all moderate successes in the Evangelion franchise. These films helped elevate Evangelion to an almost cult-like status. While the original show ran in the mid nineties, the films helped keep the hype for the series alive.

But that’s not all that they’ve pulled off. The studio has also had a couple of live action films as well, with the next being set for a 2021 release.

Their big 2021 release is awaited by fans of classic and retro anime with awaited breath. The next year will mark the return of Shin Ultraman. The flick will feature Anno and be distributed by TOHO. It’s a nice continuation showing that khara excels in taking things like retro shows and making them all the more relevant again.

2016 marked the ten year anniversary for the company and they celebrated with a Harajuku exhibit celebration, complete with artwork showing off everything they had achieved throughout the years. It was a fitting tribute, providing fans and critics with art from the series they knew and loved.

While their direct work has been mostly Evangelion works, there have been numerous series that the studio has worked with that have been smash successes. They’ve been involved with everything from cult classics to mainstream hits.

Khara’s resilience in the industry is exactly why they’re such a success. With numerous hits behind their name and even more that might not be obviously tied to the studio. But despite everything that the past years have thrown at the studio, khara has made it clear they’re here to stay.