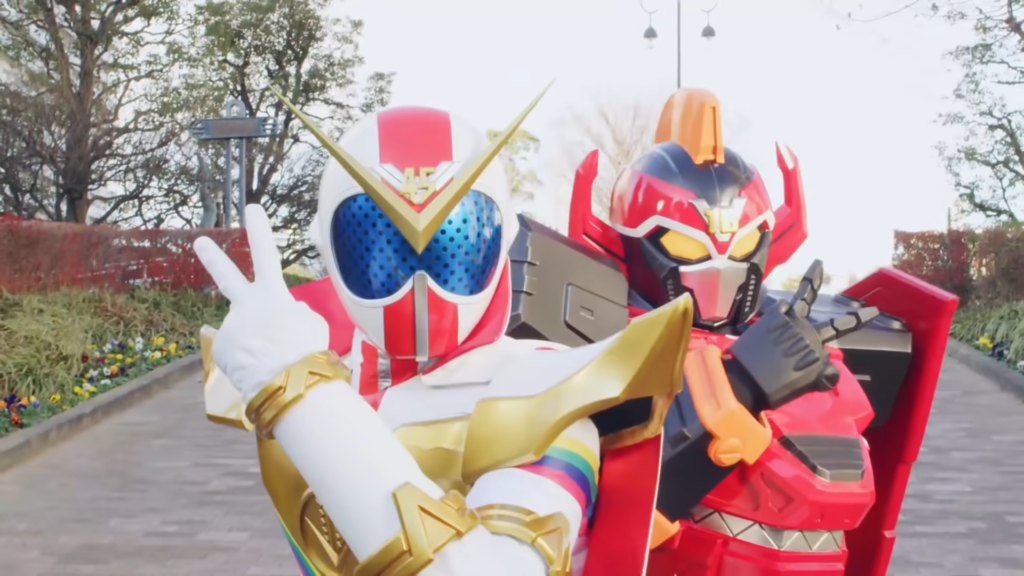 2021 marks the 46th Anniversary of Shotaro Ishinomori’s Super Sentai franchise, though we’re all agreeing to pretend it’s the 45th! It does make a certain sense, as the original series ran for two years, making 2021’s Kikai Sentai Zenkaiger the 45th official Sentai iteration.

All the preview material for Toei Company‘s new show indicated it would both be an ‘anniversary project’ and entirely new territory for the franchise, eschewing a handful of its time-tested convention. Bold, to burn both sides of the candle so openly, but with the Reiwa era now in full swing (and hopefully the COVID era coming to a close before the 46th iteration), why not take some risks?

While the Super Sentai franchise is best known internationally for spawning the also continuing Power Rangers (which at its peak was a bigger short-term fad than Sentai alone ever would be), the new Millenium brought with it a growing western interest in the original material.

Thus, we bring you our review of Kikai Sentai Zenkaiger Episode 1.

The ‘Kikai’ in Kikai Sentai Zenkaiger translates to ‘machine world’ which helps put a bunch of machine people being apparitioned into The Regular World into context. Sort of beautiful really, as within the month the mech-race finds themselves successfully integrated into human society: tiny machine children go to school, robo-pals cook up a storm for their pals… it all makes for a beautiful sight. This sort of idealized reality is one of the reasons people do watch shows made for children after all.

Zenkaiger Episode 1 starts off with robot-men getting Isekai’d to earth rules, but of course there’s also mechanoid bad guys waiting in the rafters and they begin launching an attack on the earthlings. Oh so coincidentally, Kaido Goshikida, the son of a scientist studying into ‘the machine world’ no one quite believed in before, rushes in to save the day as the new Sentai Guy, forcing a red robot named Juran to tag along.

Canonically, sentai teams haven’t always been human per se, but most do appear to be humanoid at the very least. In a series famous for its giant transforming mechazords, beginning the new series with a bunch of people-sized bots who then morph into people-sized Megazords changes the visual paradigm of the sentai tradition; though it perhaps allows for even more toy sales than what the original formula would, an accomplishment we recognize.

Not only are there More Robots than ever, but Zenkaiger Episode 1 right at the very beginning eschews the age-old concept of the ‘red ranger’. Sure, the particularly Kamen Rider-looking white-suited ‘Zenkaiger’ features a secondary red motif, but his new robot best friend also adorns a crimson color-scheme. Red getting a demotion in the Sentai prominency rankings doesn’t go unnoticed.

Despite the changes to the plastic-wrapping, the show made to sell plastic to 8-year-old boys ultimately doesn’t stray too far from its traditions.

Despite some chopping and screwing to the old school sentai formula, the sentai skeletal frame remains intact. Ultimately, the show’s opts for the usual lead: a charismatic and handsome young man with a Goku-esque smirk taking on indiscriminate evil.

Bad-Guy machines pretty much engage in terrorism, but just like the vast swathe of the previous 44 sentai shows, Zenkaiger Episode 1 utilizes a light tone that conveys a wink, saying ‘don’t worry, we’re all just play fighting.’

Of course, coming off the brain-jumbling Evangelion 3.0+1.0, literally anything else will disappoint in the story and atmosphere, but even amongst tokusatsu standards, Zenkaiger plays incredibly safe. No one’s expecting Toei to reinvent the human-suit wheel here, but even the fight choreography feels downright uninspired compared to even just ten years ago.

Though thinking about this more deeply than we should, both the changes and the hesitance can potentially be explained by the same airborn phenomenon.

COVID folks, have you heard about this? Not to instantly date this article, but Kikai Sentai Zenkaiger was produced and filmed during COVID, and this global pandemic we’d all like to forget manifests itself in a few ways here.

To be fair, I hadn’t even considered this perspective until a Japanese friend at a Sushi Bar in Akihabara illuminated me with a somber look on his face. While serving the dual purpose of shaking sentai up, having nearly the entire cast of the show except for one person in a rubber contraption at all times makes for some damn good COVID protect.

The light-and-simple-even-for-sentai standards, at least as exhibited by Zenkaiger Episode 1, may also result from a desire to keep people calm in these particularly stressful times. Perhaps these surface formula changes are to make up for not being able to go all out with its action or human drama due to COVID-based production restriction.

To that end, Zenkaiger does not only lay on the Sentai love but specifically Mighty Morphin Power Rangers fanservice too.

Ultimately, Kikai Sentai Zenkaiger Episode 1 makes for a decent place to start or continue a sentai curiosity. It is lighter-end fare, but that makes for a breezy watch that makes its 20 or so minutes pass right by.

Specifically Mighty Morphin Power Rangers fans should notice the abundance of adoration lathered that way for two reasons: In the first 10 seconds of the show we see Zyuranger footage right after a cut from the 1975 original, the Sentai series cut up to make the OG Power Rangers. Second, above, the Morphed form of the red robot Juran not only looks like a condensed Original Power Rangers Megazord, the 16 upon its head correlates to Zyuranger being the 16th iteration of Sentai.

Of course, Zyuranger has its Japanese fans, but know that Toei isn’t unaware of Power Rangers and their influence around the world. Utilizing imagery most specific to Power Rangers knowingly says that’s a part of Sentai’s 45 (46) years too.

If you are in Japan or have access to a VPN, you can watch Kikai Sentai Zenkaiger Episode 1 on YouTube free for the next month.