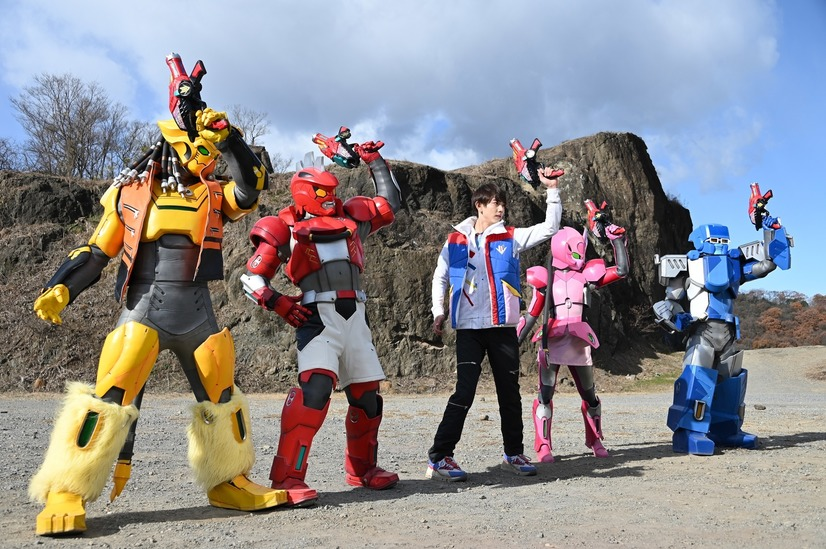 With Hideaki Anno‘s childhood dream project Shin Ultraman becoming a reality in just a few months, maybe 2021’s the year we all get into Tokusatsu. Of course, when it comes to the dizzying wide world of Toku productions, Super Sentai remains the people’s champion with Power Rangers adaptations still being made from them till this day. The 45th season of Super Sentai, Kikai Sentai Zenkaiger, looks like a huge departure from the previous formula by eschewing ‘rangers’ all together for human-sized Megazords. Though it plans to call back the past, at the same time it marks a spiritual restart for the franchise.

As is Super Sentai tradition, the brand new Kikai Sentai Zenkaiger team will debut in a feature film before their series properly starts. Their movie, Kikai Sentai Zenkaiger the Movie: Red Battle! All Sentai Great Assemble!!,will introduce them to the world alongside some fan-favorite characters from series’ recent past on 20 February, while the small screen debut will launch 8 March. For a 45th anniversary, Toei throwing all convention away to give us ‘Zenkaizer’ and his fully robot team is gutsy. We also like that the main character looks like a cross between the original sentai design and the original Kamen Rider; a fitting tribute for Manga god Shotaro Ishinomori responsible for creating both ever-lasting Tokusatsu staples.

Super Sentai‘s always enjoyed a cult audience in the west separate from Power Rangers nostalgics, but with the Toku streaming service growing and Ultraman on the eve of getting a huge popularity boost, it’s possible the rainfall will throw fans towards Super Sentai as well. Zenkaiger seems to smartly be heading into new territory by throwing old fans enough referential bones to keep them comfortable while embarking on new territory.

The Cross-Cultural Journey of Super Sentai

other Steven Porfiri 2 years ago