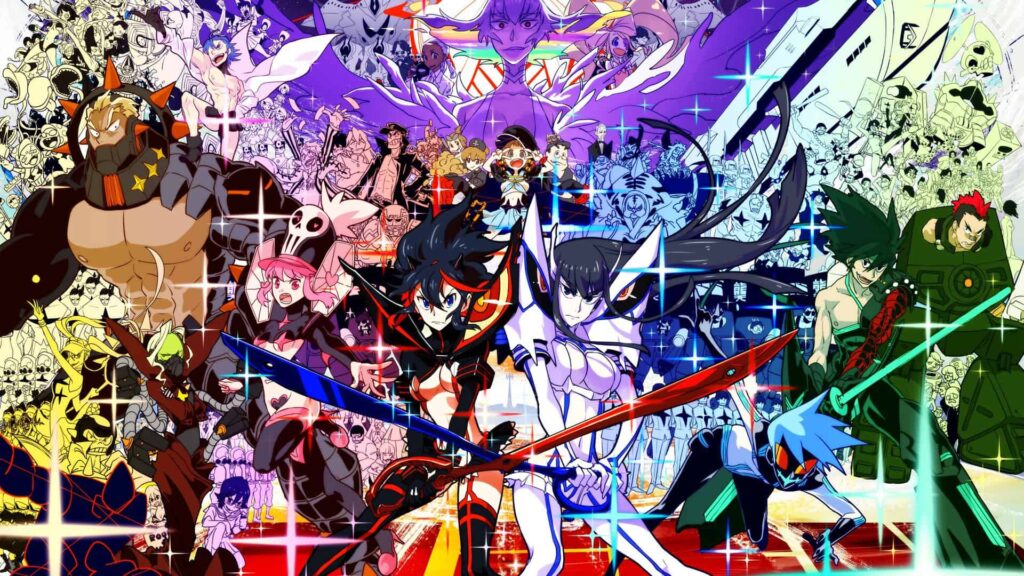 Can you believe 2021 marks the tenth anniversary of Studio Trigger? It feels like just yesterday that animator Hiroyuki Imaishi took some of his buddies from Gainax and formed Trigger off of the success of Gurren Lagann and notoriety of Panty and Stocking with Garterbelt.

Their first work, Kill la Kill, debuted in the glorious anime year of 2013, where most of the hit shows are showcased. And I’m going to start things by saying this: Kill la Kill is Studio Trigger’s most important work. Every anime from the studio afterwards owes a debt to the way the show burst onto the scene and established its manic tone right away. 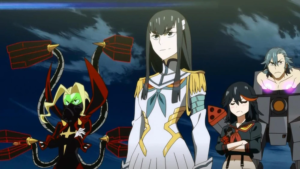 Yes, I admit I’m very biased on this opinion. I was still in high school when the show premiered and was awed by the visual every week. It was also one of my seasonal anime that I watched and I have no regrets.

Productions like Gurren Lagann walked to set the stage, so that Kill la Kill could run and cement the foundation of a Trigger anime. This anime is about as anime as it gets.

To convince you, let’s go over some compelling reasons why we should pay a great amount of respect to Kill la Kill. We’ll make sure it becomes a memorable classic for the next generation of anime fans.

Transfer student Ryuko Matoi arrives at the prestigious Honnoji Academy, where law and order are absolute. Satsuki Kiryuin is the fierce student council president who upholds a strict moral code and class system based on Goku Uniforms. The weak get ordinary uniforms while the strong are given battle-ready garbs that secure victory. Both Ryuko and Satsuki find themselves at odds with each other and battle for order of the school.

The Cast of Characters Have Personality 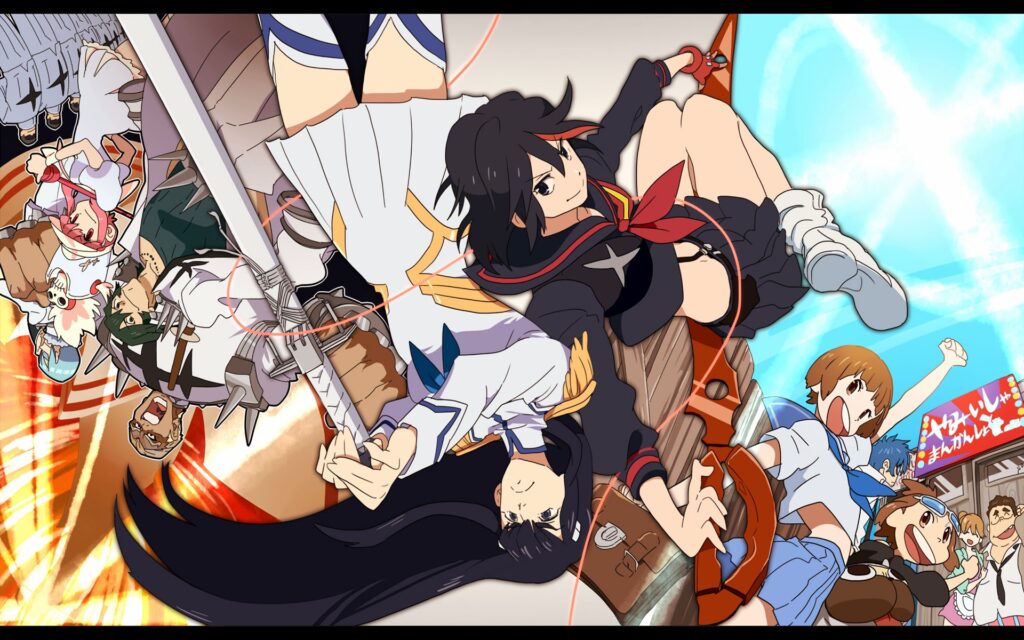 Kill la Kill embraces its blatant anime identity. It takes a lot of common clichés and tropes and puts its own fresh spin, like the ridiculous, equal opportunity fanservice it features (I can guarantee that everyone in the show is stripped of their clothing at some point). Much of that can be credited towards the anime’s cast, starting with the heroine, Ryuko.

Every character is memorable, loud, and spirited, and Ryuko carries that mantle with pride. She doesn’t take nonsense from anybody and is quick to defend her friends when they’re in trouble. Like any other badass anime character, she has an awesome signature weapon in the red scissor blade, and a cool sidekick to help her out: Senketsu, a talking black sailor uniform. Ryuko is a protagonist you wholeheartedly want to root for the win.

On the other hand, you have Satsuki and the Honnouji Academy Elite Four who help her rule with an iron fist. Satsuki’s friends consist of the athletic Uzu Sanageyema, the brains Houka Inumata, the lughead brawn Ira Gamagoori, and Satsuki’s childhood friend Nonon Jakuzure (voiced by Gainax/Trigger regular Mayumi Shintani). Each antagonist here has a distinct personality that makes them unique and fun to watch whenever they interact with each other. 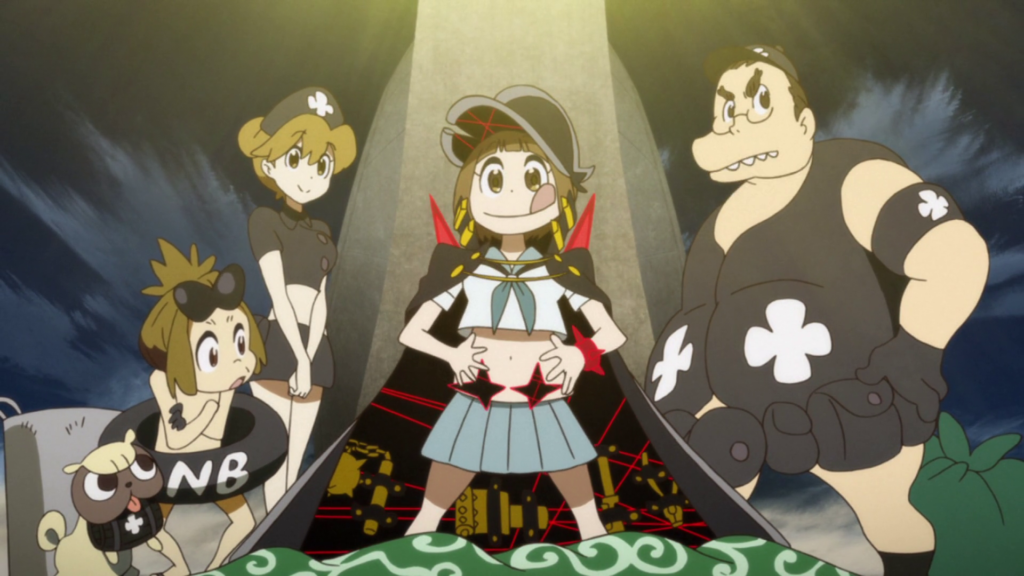 Of course, Ryuko has her allies too. The free spirit and carefree Mako Mankanshoku is the highlight of the show and plays the comic relief in most moments, with some exceptions. She’s one of the first friends Ryuko meets in school and is her closest confidante. She also has a unique family, to say the least.

By the end of Kill la Kill, you’ll have gone on a journey with Ryuko and friends, feeling much closer to them as their story closes. Through several redemption arcs, you get that final satisfaction and closure when everyone teams up to finally defeat the bad guy. 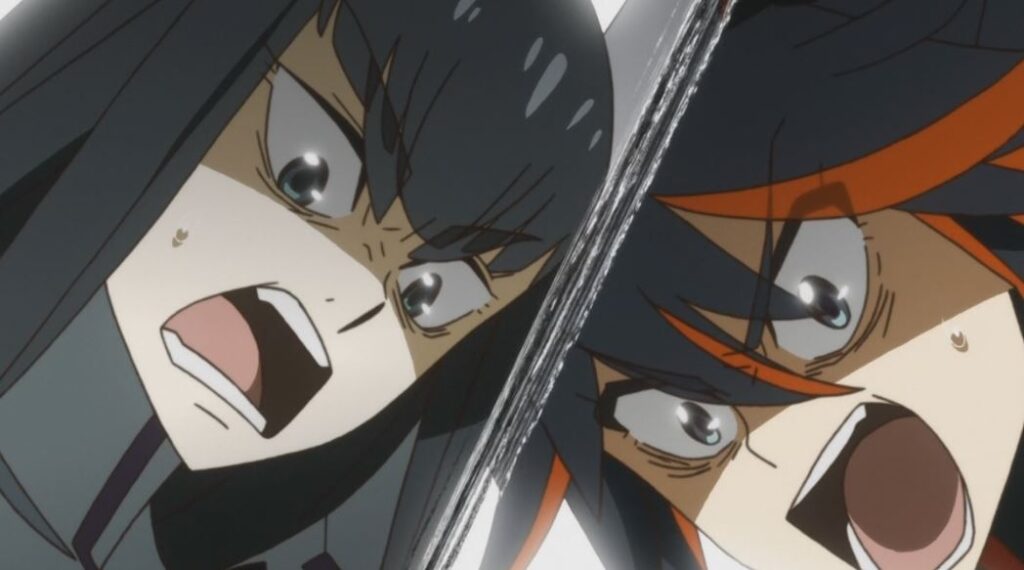 Kill la Kill had its fair share of betrayals and surprising twists throughout its run. It’s sort of like a wrestling match, where two characters initially view each other as enemies, only for some twist to reveal the true villain. From that point, the two characters set aside their differences to defeat a bigger evil.

That’s the drama Kill la Kill builds towards the series’ climax, and the payoff is outstanding. I’d rather not spoil the show, but trust me: you’ll be floored. You couldn’t script a better soap opera drama from it. These betrayals and revelations are only made better by the antagonists of the series: Ragyo Kiryuin and Nui Harime. 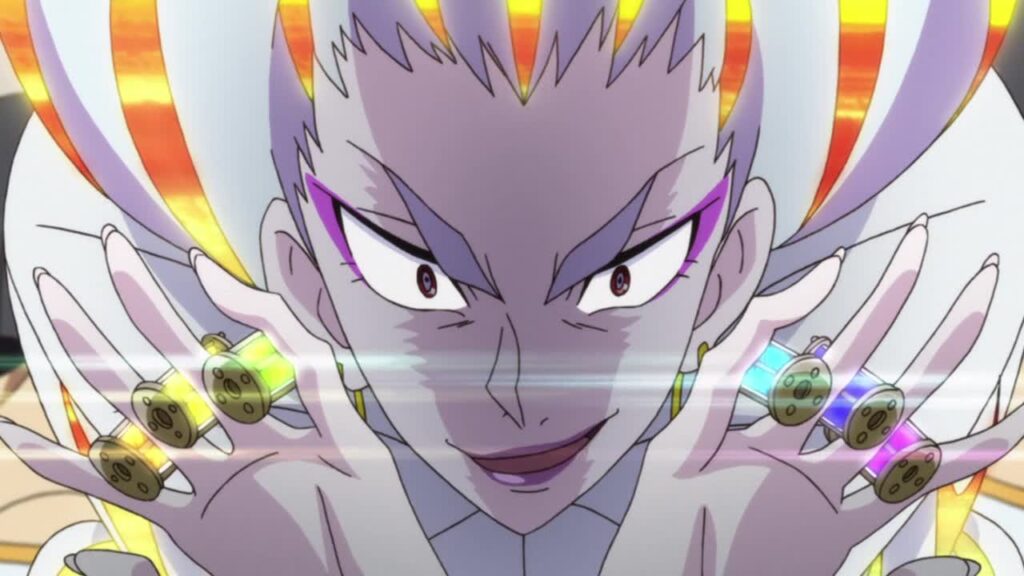 The latter is a maniacal kawaii human experiment who is Ragyo’s servant and beats the living daylights out of our heroine. Satsuki’s mother, Ragyo, is a character herself, making a grand entrance while embracing her final boss role throughout the anime’s second half. She has a strong obsession with the life fibers of Kamui uniforms that rival Cruella De Vil’s fascination with spotted dog fur.

Overall, with the betrayals, revelations, and all out villainy, Kill la Kill becomes that much more entertaining.

The Music Is Phenomenal

Hiroyuki Sawano’s musical production is just tailor made for any action anime, and Kill la Kill has many action scenes. The OST is a strong, eclectic mix of rock, hip hop, and dramatic orchestra reminiscent of an early 2000s Linkin Park album. These elements not only elevate the action packed fights and quieter moments in the series, but the music itself has effective impact.

The most famous song from the soundtrack is Before my body is dry, which gives us the triumphant signature line: DON’T LOSE YOUR WAY! It’s a strong message to put in your song and very fitting for a hit action anime like Kill la Kill. 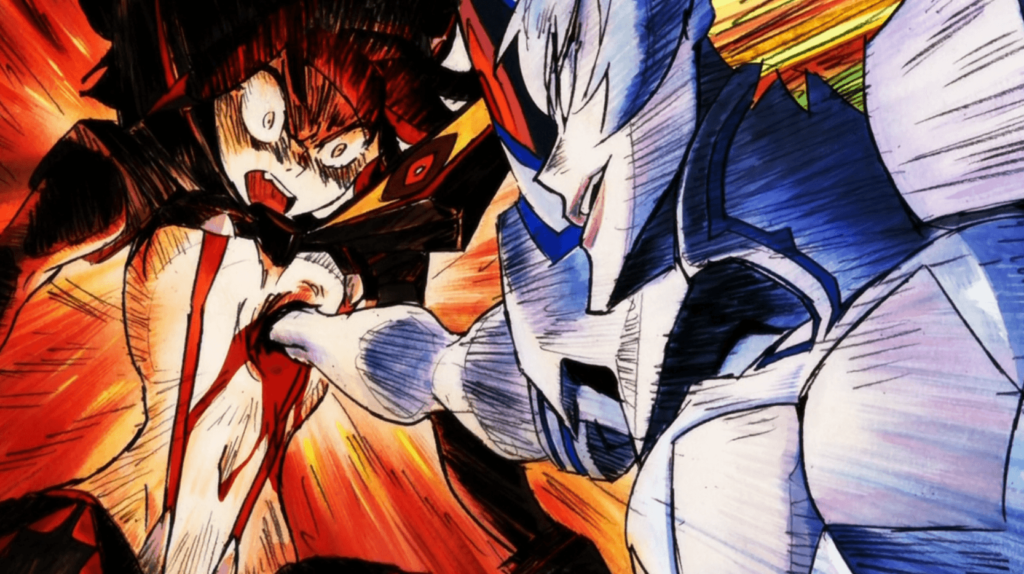 Paired with the music are the phenomenal fights that still hold up today as stunning visual art. Look on YouTube and you’ll see new 60 FPS video clips of Ryuko and Satsuki fighting each other or random one-episode villains of the day. My personal recommendation is the final battle with both Ryuko and Satsuki versus Ragyo. That fight feels like you’ll have been in three climatic endings all at once.

Trigger’s most recent hit film Promare and their newest series Brand New Animal: BNA owe a lot to the influence and tone set by Kill la Kill. Every anime they’ve worked on since has that memorable vibe that distinguishes itself from other productions. With the upcoming SSSS.Dynazenon set to be released in April, there’s no doubt Trigger will use their signature style and put their all into making it awesome.

Kill la Kill is available to stream on Crunchyroll and Funimation.