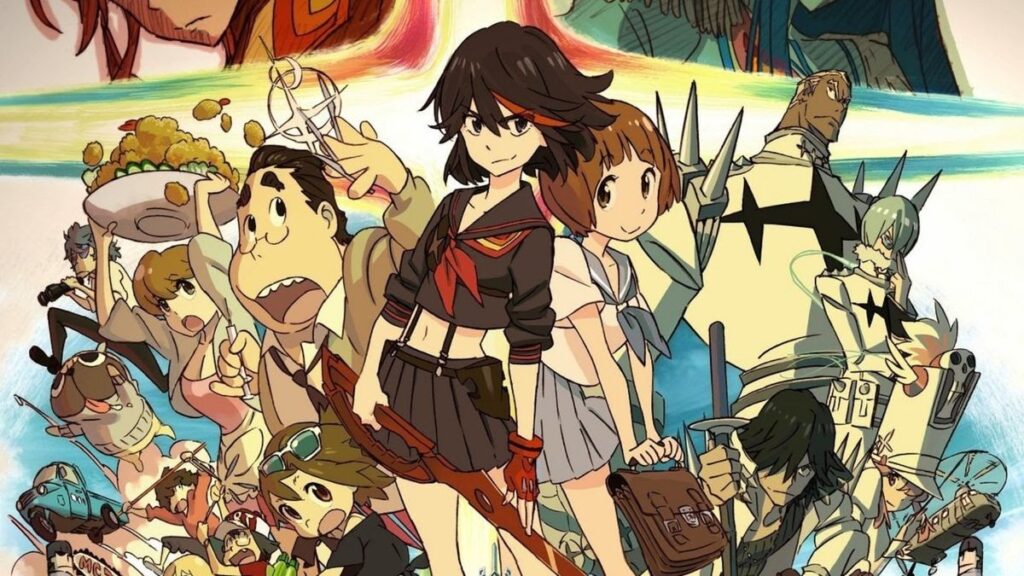 In the TV anime series Kill La Kill, school activities really do matter. Kill La Kill is a wonderful satirical parody of a lot of different genres, blending together parts of high school slice-of-life comedy, magical girl series and fighting anime shows. And it’s all done in the style of a high-intensity, high-energy, over-the-top Gainax production.

So, in a lot of high school anime shows, clubs and athletic teams are extremely important parts of school life.  Here, club activities are deadly serious, with an emphasis on the deadly part. You know that magical girl series where the cute girls fight evil while wearing sailor-style schoolgirl uniforms? Kill La Kill has that as well. But these girls aren’t sweet and innocent flowers. It’s more like Goku and Vegeta were reincarnated as high school girls.  There are no scouters, but the power levels are over 9000.

Gainaxing All Over the Place

Kill La Kill was the first anime series produced by Trigger after director Hiroyuki Imaishi left Gainax to co-found his own studio. And the Gainax influence really shows.

Many of the characters are as hot-blooded and hammy as the characters in Tengen Toppa Gurren Lagann. The show loves to crank it up to eleven as much as possible.  Scenes are bold, brash and loud. The comedy is funny and weird, without being too distracting from the action.

The art and animation are both wonderful, and fight scenes — of which there are a lot — are fluid.

Basic Outline of the Naked Plot

The story revolves around Ryuko Matoi.  At the beginning of the series, she is a transfer student to Honnouji Academy and something of a delinquent. She’s searching for the person who killed her father, Isshin Matoi.

Ryuko wields a powerful sword, the scissor blade, which is just one half of a weapon created by her father.  Whoever has the other half probably killed her father. She also discovers a strange outfit called a Kamui Uniform, which has special powers.

Ryuko is opposed in her quest by Satsuki Kiryuin, the powerful president of the student council. Ryuko suspects that she knows about the murder, and perhaps might even be a strong suspect.

Satsuki rules the school with an iron fist, and she has the support of the school’s many clubs. In order to get to Satsuki, Ryuko must fight the leaders of these clubs, culminating with the Elite Four,  Satsuki’s top generals.

And that’s just the first half of the anime. The spoilers get heavy from here.

In the second half, Ryuko finally learns who killed her father, and it’s not Satsuki. Satsuki leads Honnouji into battle against other Japanese schools, especially in the Kansai region. This story arc is a lovely parody of school class trips and school sports tournaments, only replaced with actual wartime combat.

The real villain of the series is revealed, and it’s Satsuki’s mother, Ragyo Kiryuin.  It turns out that Satsuki was a good guy all along; just with some extreme methods. Ragyo is also revealed to be Ryuko’s mother.

The rest of the series is a desperate fight by the humans against the aliens who want to take over the Earth with clothing. No, really. Clothes are evil.

Ryuko has a heroic breakdown, which leads to her switching sides temporarily. Of course, this requires Satsuki and the Elite Four to get her to snap to her senses.

In the end, good triumphs over evil in the final battle, and there’s a cute epilogue where we finally get to see the two sisters acting like relatively normal schoolgirls.

Note: That is, things return to normal until the OVA episode Goodbye Again. In this extra episode, we get an absolutely final battle before the big graduation ceremony, and the real true ending to the series. 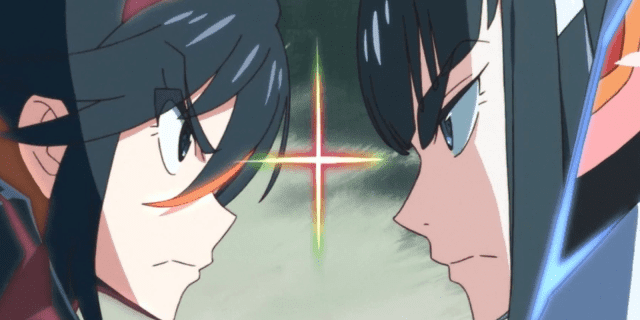 School Uniforms and Other Outfits

Clothes play an extremely important role in the anime.

For example, all of the club presidents that Ryuko must fight wear special outfits called Goku Uniforms. These outfits are infused with these special things called Life Fibers, which give the user superhuman strength and abilities.

The Kamui Uniforms are made entirely out of Life Fibers. At the beginning of the series, Ryuko receives the Senketsu Kamui uniform, and Satsuki has the other one, Junketsu.

Both Senketsu and Junketsu are designed to look like ordinary schoolgirl uniforms when not actively in use.  When needed, they transform to a more battle-like — although also more revealing — form.

Of course, this transformation sequence is what allows Kill La Kill to be considered a parody of a magical girl series; without that element, you just have schoolgirls beating people up.

Senketsu can talk. Despite looking like a skimpy schoolgirl sailor outfit, he sounds like a grumpy man. Junketsu either can’t speak or doesn’t want to talk.

Eventually, the Life Fibers are revealed to be parasitic aliens. In the Kill La Kill universe, aliens are the reason why human beings wear clothes in the first place.

Since clothes are aliens, it makes sense that the rebel group fighting the aliens would choose to do so naked, or as close to naked as feasibly possible. Near the end of the series, all the main protagonists join this organization, Nudist Beach.

The Nudist Beach uniform, if it can be called that, consists largely of gun holsters, strategically placed utility belts, and straps to hold it all together. Socks, shoes and gloves seem to be OK.

Naturally, a show with a lot of revealing outfits has inspired a lot of cosplay. Of course, Ryuko and Satsuki’s Kamui Uniforms are quite popular cosplay choices.

Ryuko’s normal schoolgirl outfit is not that revealing, and shouldn’t break any convention rules. A good Ryuko cosplayer needs a scissor blade.

Mako Mankanshoku is another good, popular and safe choice which won’t shock the parents. She’s probably the cutest character on the show, and her plain schoolgirl outfit is surprisingly distinctive — most ‘generic schoolgirl’ outfits are darker. She can be upgraded by adding Fight Club pieces to her uniform.

Speaking of Mako, there are many, many really good characters in Kill La Kill. Arguably, some of the minor and secondary characters are more entertaining to watch than the main protagonist or initial antagonist.

When the school invades Kansai, it’s Mako who attempts a normal sightseeing trip, loading up on food and cheap bargain souvenirs. She’s the one ‘normal’ unpowered member of the student group.

She shows that she is capable of putting up a fight when she temporarily becomes the Fight Club president.

Gamagoori is ridiculously large, muscular and serious. As Satsuki’s right-hand man, he enforces the rules at school. He is extremely loyal to Satsuki, although he develops a relationship with Mako. (Mako is not very large to begin with, but she looks tiny next to Gamagoori.)

Jakuzure leads the non-athletic clubs. She dresses like a drum majorette for a marching band.  She is cute, cheerful, sassy and arrogant. Her battle technique often involves music. She has apparently known Satsuki longer than the other Elite Four.

Inumuta is the information and strategy expert. He’s smart and analytical. He’s very sarcastic, but otherwise not very emotional.

Sanageyama is the leader of the athletic clubs. He starts out as very laid back and confident; but he loses a lot of confidence after losing to Ryuko. He sews his eyes shut, and develops clairvoyance to make up for it.

She is loyal to Ragyo Kiryuin, rather than to Satsuki, although Ragyo calls her a free spirit who does what she wants.

Halfway through the series, it is revealed that she killed Ryuko’s father. She carries a purple scissor blade, which can attach to the red half that Ryuko has.

He seems old and tired at first, but becomes more flamboyant as his true identity is revealed.

Tsumugu Kinagase is an operative underneath Mikisugi. He is serious and tough. He hates the alien Life Fibers — including the Kamui uniforms. The two main Nudist Beach guys can combine in the Dotonbori Robo DTR.

Nudist Beach is helped financially by Kaneo Takarada, the rich and powerful heir to the Takarada Conglomerate.

He first appears as the obnoxious leader of the Osaka forces against Satsuki, when Honnoji invades. Takarada is proud, passionate and arrogant.

His gaudy black, white and orange outfit is probably a reference to the Hanshin Tigers, which traditionally has been Osaka’s professional baseball team — even though they currently play in Nishinomiya — and rival to the Yomiuri (Tokyo) Giants.

In 2019, Kill La Kill -IF was released. The video game is a fighting/ battle game for PlayStation 4, Nintendo Switch and Microsoft Windows.

Interestingly, in story mode, you fight as Satsuki, not as Ryuko.  Satsuki must fight other characters before battling Ragyo. Completing Satsuki’s story mode will unlock Ryuko’s story mode.

History and Other Stuff

Kill La Kill started out as an anime in 2013. Kadokawa created a manga to go along with the anime series. The OVA episode was added in 2014.

Ami Koshimizu is the voice of Ryuko. She is also Sailor Jupiter in Sailor Moon Crystal and Kallen in Code Geass.   Ryoka Yuzuki is Satsuki.  She is Ino in Naruto. Aya Suzaki is Mako.