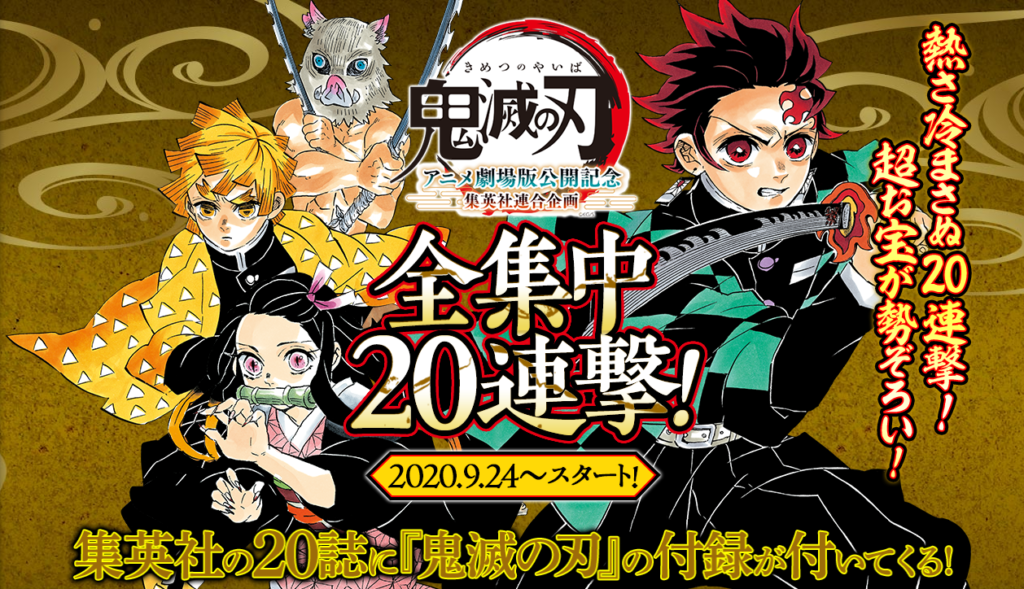 A giveaway to promote the upcoming Demon Slayer: Kimetsu no Yaiba movie is set to take over 20 different magazines across publisher Shueisha’s line-up, constituting an unprecedented campaign for Koyoharu Gotouge’s series. While free giveaways associated with Kimetsu no Yaiba are certainly not a new thing, one on this scale certainly is.

Free Kimetsu no Yaiba gifts will come attached to the following magazines while stocks last:

That’s certainly a lot of magazines, consisting of pretty much every magazine in Shueisha’s current lineup. And while the usual suspects are here – Weekly Shonen Jump, Saikyo Jump etc. – there are also some oddballs: Non-no, a women’s fashion magazine; UOMO, a men’s lifestyle magazine, and Weekly Playboy, the gravure and tabloid news magazine where Kinnikuman is currently serialized.

As part of the unprecedented Kimetsu no Yaiba giveaway, fans can pick up a variety of prizes, ranging from posters, stickers, clear files, and even a folding fan. You can check out the full list via the official Shonen Jump website.

If this giveaway has made one thing clear, it is the unprecedented mainstream appeal that Kimetsu no Yaiba enjoys in Japan. Obviously, you don’t get to become Oricon’s second-highest selling series of all time without branching out just a little bit, but the fact that Koyoharu Gotouge’s dark fantasy series appeals to far more than young boys is exemplified by its collaboration with magazines from such differing genres and demographics.

As such, one can only imagine what kind of a reception the movie will get when it releases on October 16, as well as when its final manga volume releases sometime in the future.