If you’re a fan of Demon Slayer: Kimetsu no Yaiba, but your weekday schedule involves corporate demons rather than literal ones, you might be interested in these new neckties.

There are two tie designs for each character. If you like Tanjiro, but don’t like green, they also have one in blue. Nezuko’s ties are pink, and reddish-pink. Zenitsu’s are yellow, and dark blue.  Inosuke’s ties are blue, and black.

These ties are really quite stealthy, tasteful, and subtle. They would probably be appropriate in many office settings. 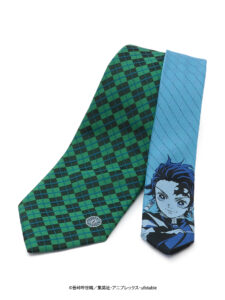 Generally speaking, Haruyama is better known as a clothing store chain which specializes in suits and business wear, rather than as an anime fan goods supplier. They have branches throughout Japan.

The Kimetsu no Yaiba neckties are available online through the company’s Perfect Suit Factory (P.S.FA) brand.

The neckties are part of a collaboration with the creators of Demon Slayer.  If your “office” consists of a telecommute from a room in your home, Haruyama also sells a variety of Demon Slayer T-shirts.

If you wander around the online catalog, you’ll see that Haruyama has done collaborations with other anime series as well.

But, if you need a tie for whatever reason, you’ll probably look as sharp as Tanjiro’s katana in one of these.