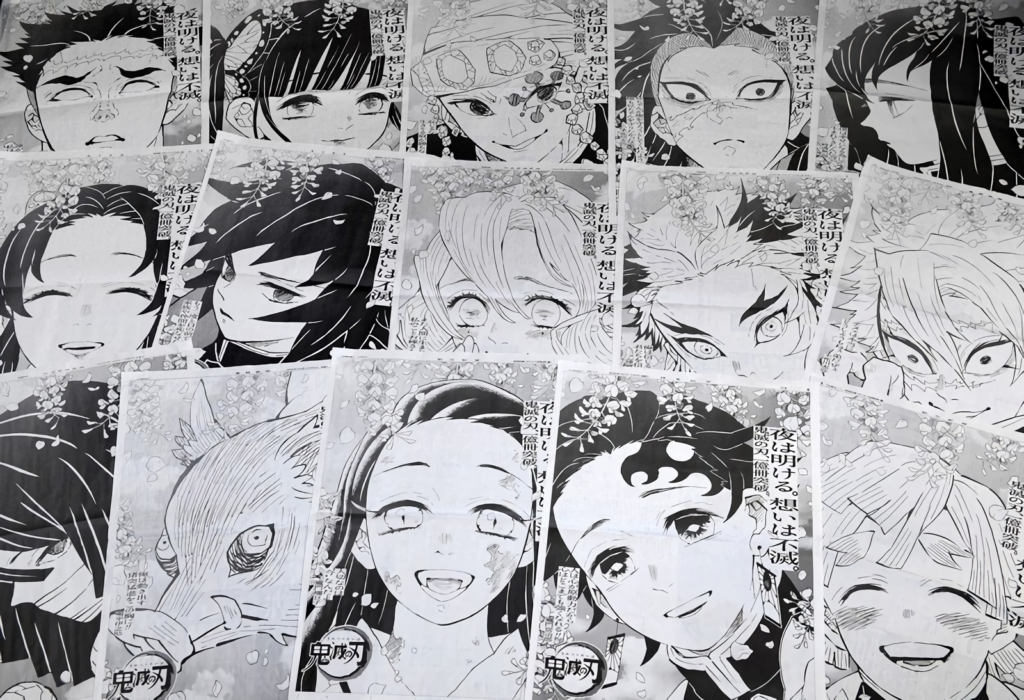 To celebrate the release of Demon Slayer: Kimetsu no Yaiba’s final, twenty-third collected volume, Koyoharu Gotouge’s record-breaking series took over the pages of five major Japanese newspapers today. While Kimetsu no Yaiba crossing over with other publications outside of Weekly Shonen Jump isn’t exactly something new, what is significant about this broadsheet promotion is how broad it is and how it functions as a fitting farewell for the series itself.

First of all, initial coverage of Kimetsu no Yaiba’s newspaper takeover betrayed the extent of the initiative. Featured in five different publications (Yomiuri Shimbun, Asahi Shimbun, Mainichi Shimbun, Nihon Keizai Shimbun, and Sankei Shimbun in Osaka only), each paper carried illustrations of three different characters out of a possible pool of fifteen. The total pages dedicated to Kimetsu no Yaiba then climb up to five when considering the ‘100 million sales gratitude commemoration’ and the ‘full-page final volume commemoration’ that were also published in every newspaper.

Anyone who opened up their copy of Nihon Keizai this morning expecting to read reports on the latest effects of the Coronavirus (COVID-19) on the Japanese economy might’ve, therefore, been taken aback. Fans of the series, however, were ready: according to a report by Oricon, many woke up early not just to get their hands on the final volume, but also the Kimetsu no Yaiba-featuring newspapers.

In fact, one convenience store employee said to the author of the Oricon article that ‘I’ve never seen this many people buying newspapers. You’re the fourth person I’ve seen so far’ at five in the morning. Some even visited multiple convenience stores to get their hands on all five.

Another article by Oricon points out the irony of having Kyoichiro Rengoku featured in Nihon Keizai. Also known as the Nikkei, this broadsheet is known for its focus on business and finance. To have Rengoku featured in it, then, seems like more than just a coincidence: Mugen Train, which is largely focused on him, is breaking Japanese box office records and lifting up the entire Japanese economy in the process. One user dryly remarked, ‘Undoubtedly, Rengoku is the “pillar” of the Japanese economy,’ referring to his status in the series as the Flame Pillar.

Finally, the ‘100 million sales gratitude commemoration’ and ‘full-page final volume commemoration’ pages mentioned earlier make it clear that this Kimetsu no Yaiba newspaper takeover campaign is meant for much more than marketing. Obviously, it also has that benefit, but feels more like a true final farewell for the series.

In series author Koyoharu Gotouge’s comment on the ‘100 million sales’ page, they talk about being supported by a lot of people and express their thanks for the extraordinary support. They also leave off with a wish: ‘May the path that you walk forever be bountiful, and I wish for your continued happiness from the bottom of my heart.’ This sounds awfully a lot like a final farewell from an author who has already seen enough success to last a lifetime.

Furthermore, the quote that the ‘full-page final volume commemoration’ leaves us off with is quite distinctive: taken from Kagaya Ubuyashiki, it reads ‘Eternity is human feeling. Only human feelings last forever, and are undying’ (VIZ’s translation from chapter 137).

Could this not be Kimetsu no Yaiba’s way of saying to us that, despite ending, our memories of the series will live inside of us forever? Shueisha and Studio ufotable probably hope so, given how much money they stand to make.

We should also take a moment to consider, however, the reason why Shueisha decided to feature Demon Slayer: Kimetsu no Yaiba in so many major Japanese newspapers. Already, the series’ mainstream success has been proven time and time again, so that point doesn’t need to be explained. Nevertheless, to organize something this extensive must’ve taken a considerable amount of time and resources – something which Shueisha wants to see a return on.

You could see this, somewhat cynically, as a way for the publisher to ensure that volume 23 sees the best possible performance. But, for me, it feels like something different: a true farewell from the series, aiming to reach the widest audience possible.

Demon Slayer: Kimetsu no Yaiba volume 23 is out now in Japan.