Kimetsu no Yaiba is So Popular, It Now Has a Sports Drink Powder Collaboration 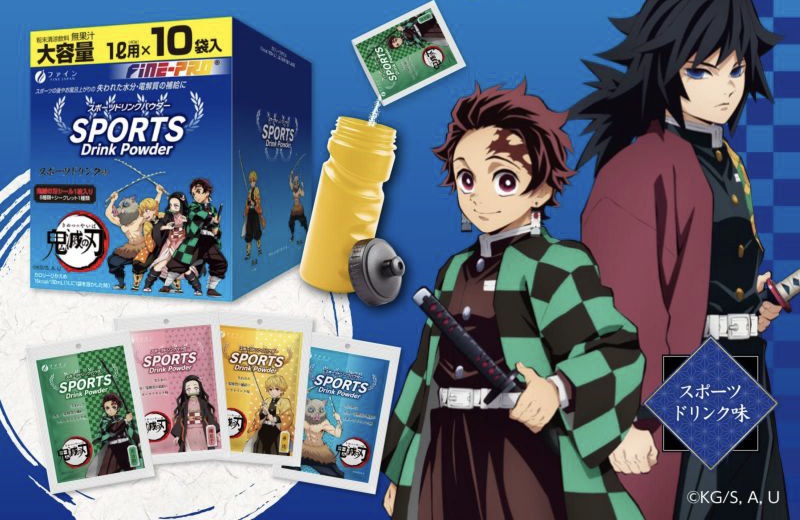 Kimetsu no Yaiba: Demon Slayer is popular. Very popular. Like, 38million manga volumes sold in less than half a year popular. It’s difficult to overstate just how successful the series has been ever since ufotable’s anime adaptation helped propel the series into unprecedented levels of success and guaranteed it a legacy far beyond the end of the manga’s run in May, and now everyone wants a piece of the action. This popularity has inevitably meant that the series has received countless merchandising expansions to capitalize on this success, but some of them are a little more unusual than others. Maybe you’ve already bought your scale figures from Good Smile Company, or even bought your own set of makeup brushes embroidered with iconography from the series. What if you’re more sporty, though? Well, why not quench that thirst with some Kimetsu no Yaiba: Demon Slayer sports drink sachets!

I have to admit, this definitely stands as one of the more unusual collaborative products related to Kimetsu no Yaiba since its explosion in popularity, yet it’s perhaps the greatest indicator yet of the series’ transcendent success beyond the traditional anime and manga fan.

From July 22nd, special 5-pack and 10-pack Kimetsu no Yaiba-branded boxes of Fine-Pro Sports Drink Powder will be adorned with characters from the series. Inside, each sachet will also be colored and designed based on each of the characters from the series. Tanjiro adorns green-colored sachets, Nezuko’s sachets are tinted pink, Zenitsu’s sachets are pink while the blue packaging belongs to Inosuke. Beyond the faces of the characters endorsing the products, each 5-pack or 10-pack box contains a random sticker out of 8 different designs, featuring iconic stills from the anime adaptation of the series.

A sports drink supplement powder is an unusual collaboration that most anime and manga series wouldn’t receive. Kimetsu no Yaiba is no ordinary series though, and with such a massive cultural impact in just the last 12 months alone, it’s appeal has grown to the point that such products just make sense. You can purchase the packet individually or in special retail sets that come in larger branded boxes over on the company’s official website.