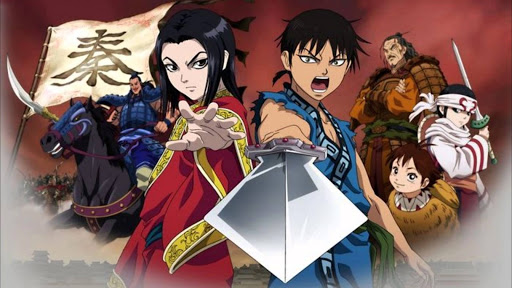 There are plenty of anime series which take place in historical Japan, specifically during the Sengoku period, a time of intense civil war. Off the top of my head, Sengoku Basara, Brave 10, Dororo, Nobunaga Concerto… and the list goes on. There’s absolutely nothing wrong with that, but period dramas, and comedies, aren’t lacking in the anime world.

Kingdom takes place in the warring states period as well, but with one key difference. This tale takes place in ancient China, around 300 BC. And it’s one of the most engaging series I’ve ever been told to read and watch.

Despite its insanely positive reviews and impressive sales record, I find relatively few people who are familiar with the series. Its accolades alone should warrant at least an exploratory watch. In 2019 it was the third best-selling manga, period. That’s insane.

With the anime series making a comeback and the story not ending anytime soon, there’s no better time to jump into this world of yesterday. Even if it doesn’t look like it’s in your wheelhouse, it’s a slippery slope. You’ll care about the characters more than you think.

During the warring states period of ancient China, countless kingdoms rose to glory only to fall into ruin. Army generals and royal descendants constantly threw their hats into the ring for supremacy, and in the end, only seven states emerged from this period of turmoil.

Li Xin (Shin) is a slave living in the Qin kingdom, made an orphan after his parents were killed in the war. Training every day until he can’t train anymore, he constantly talks about someday becoming a great general, finally putting an end to the horrors which have consumed the country.

Li’s best friend Piao shares this dream. One day he is taken to the palace for reasons unknown. When he returns, nearly dead, he tells Li to leave the village and to travel to another. When Li arrives in this mysterious place, he meets a boy who is the spitting image of Piao, and is also the King of Qin.

This causes a flood of secrets to be revealed, and Li soon learns that he has a bigger part to play than he ever imagined. He soon finds himself a commander on the battlefield, aiding the King and aiming towards the unification of the country.

The Characters of the Kingdom Anime

The Creator of Kingdom Wants to Keep the Manga Going

Before coming to television, Kingdom premiered as a manga series in Weekly Young Jump in 2006. The magazine is also known for publishing popular past series Elfen Lied, Gantz, and Tokyo Ghoul. Currently, Kingdom has been compiled into 57 volumes.

The series was created by Yasuhisa Hara, who has proven to be extremely passionate about the project. In a 2015 interview, Hara made it known that he intends for the manga to continue until it reaches 100 volumes. That would be about 1,000 chapters, so for fans praying that the series doesn’t end anytime soon… your wish is his command.

The Kingdom Anime and the Long-Awaited Season 3

The first season of the Kingdom anime aired from 2012 to 2013 and ran for 38 episodes. Only four months after season one ended, season two began, continuing into 2014 for 39 more episodes. Here in the US, the series was acquired by Funimation.

Season 3 of the anime series began in April 2020 to ample fanfare. Early teaser visuals of this season highlighted some impressive new art, as it features a brand new creative team. Kenichi Imaizumi is directing, while the character designs are provided by Hisashi Abe.

Imaizumi previously directed the popular Reborn! series, while Hisashi Abe has been the character designer for countless series, including Sorcerer Hunters and Gunslinger Girl.

The incredible music of season 3 is composed by Hiroyuki Sawano and Kohta Yamamoto, the former previously contributing soundtracks for Kill la Kill and Attack on Titan.

Where to Watch the Kingdom Anime and Read the Manga

All seasons of Kingdom are available to stream on Funimation, including the currently airing season 3. Only the first season is available on Hulu.

Sadly, the Kingdom manga series hasn’t yet been released in the west. It’s uncertain whether they will ever be licensed in English, but if Hara fulfills his dream of releasing 100 volumes, could you really fit them all on your bookshelf, anyway?