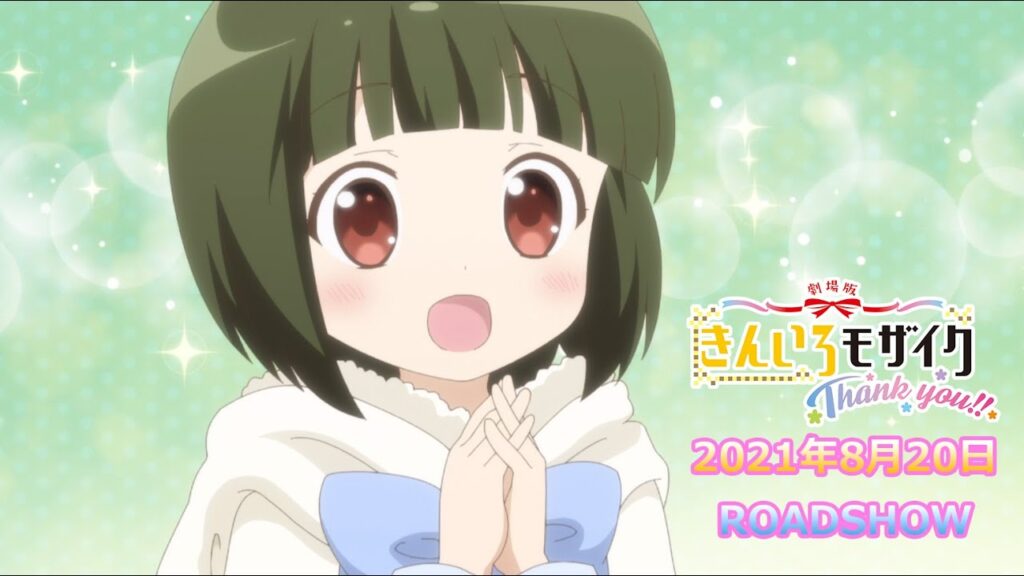 A first trailer and release date has been unveiled for the final theatrical production in the KINMOZA (Kiniro Mosaic) franchise, KINMOZA: Thank You!!.

The KINMOZA franchise is coming to an end… as much as that pains me to type. The 4-koma manga started publication in Manga Time Kirara Max all the way back in June 2010, with the manga later being adapted into two TV anime series and a theatrical OVA. A first trailer has been released for KINMOZA: Thank You!!, adapting the end of the series and the graduation of these characters at the end of their high school life.

The trailer is little more than a TV commercial and is only 20 seconds long, leaving us with very little information. It mostly promises more of the same, which, with the same studio, character designer, script writer and much of the same staff returning, is what you would want.

It’s hard not to look at this movie as a grand farewell for the KINMOZA franchise. With the manga coming to an end last year and a later serialized continuation, Best Wishes, coming to an end in the latest issue of Manga Time Kirara Max, this is the final release planned in the series at this time, and it’s adapting its end. As a beloved slice of life anime, it’s a shame, particularly since this writer has many fond memories of watching and rewatching the series and engaging with these characters.

In any case, the originally stated summer release date has been narrowed down through this first trailer for KINMOZA: Thank You!! to a 20 August release date. The ticket preorder campaigns will also get underway next month on 23 April. Fans who pre-purchase tickets can get one of six random clear files based on the key art.

You can find out more about KINMOZA: Thank You!! over on the official website.