Let’s Get Ready To Manga: Kinnikuman 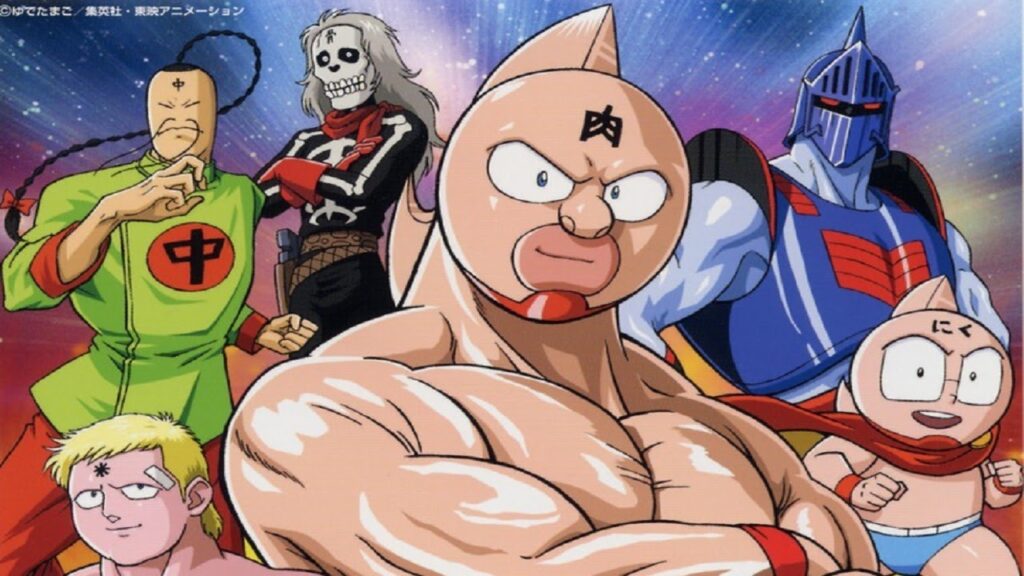 A superhero switches from saving the Earth to pro wrestling after learning that he is the true prince of the planet Kinniku in Kinnikuman.

The manga and anime series is just as unusual as that description makes it sound.

The manga began in 1979 as a parody of Ultraman.  With his weird-shaped mask, the title character sort of vaguely resembles the silver superhero, who has a distinctive ridge on his head.  The ridge becomes a huge Mohawk-like wedge on Kinnikuman’s head.

In any case, the story begins with Suguru Kinniku, a superhero.  He goes by the name Kinnikuman.

He’s not the most heroic of superheroes.  In fact, he’s kind of clumsy and cowardly.  He can grow to giant size — large enough to fight the giant Kaiju threatening the Earth — by eating garlic.

The manga starts out as a fairly straightforward and silly superhero/ kaiju parody.

In the first chapter, alien kaiju are headed for Earth. Because the Ultra Brothers are away on vacation and the American Superheroes (easily recognizable versions of Superman, Spider-Man, Batman, Captain America, Wonder Woman and Mister Fantastic) are unavailable, the government reluctantly calls on Kinnikuman to save the day.

Unfortunately, he is something of a wimp. He trains for the big showdown between Earth and the aliens. When the day of the big battle arrives, the alien monsters announce that they don’t want to fight a dumb hero like him and go home.

The second chapter is an oddball story about Kinnikuman’s favorite singing idol.  It seems that a big superhero/ wrestler can cause plenty of trouble even when he’s not fighting monsters or wrestling.

It isn’t until chapter three that he learns that he is a long-lost prince of the planet Kinniku.  There are others who claim the throne, so he fights a bunch of wrestling matches to prove that he is worthy of the title of prince.

He eventually rises to the top, and wins a wrestling tournament against several other opponents.

Over time, the superhero aspect of the story is slowly phased out, and later chapters concentrate almost entirely on the pro wrestling part.

The story gets a bit more serious as it continues, but it’s still pretty humorous.  As you might expect from a superhero parody/ pro wrestling manga, it’s all very over-the-top with evil wrestling villains fighting muscle-bound heroes in the ring.

There are several story arcs.  It starts with the Kaiju Extermination Arc.  Kinnikuman trains, meets Terryman and fights the evil Kinkotsuman — a skull-faced alien.

That arc is followed by the 20th Chojin Olympics Arc. As the name implies, the big event is an international competition for superpowered fighters. Kinnikuman competes for Japan, and fights against some international supermen.

Kinnikuman goes to Hawaii to train in the American Tour Arc.  He also gets involved with competing groups known as the World Superman Association, World Supermen Council and World Supermen Federation.

This is followed by the 21st Choujin Olympics. Veteran heroes return, and some new fighters arrive. Brocken Jr. wants revenge for the death of his father.

The Golden Mask Arc features the golden and silver masks of peace.  The heroes must battle Devil Knights to get one of the masks back.

The Dream Choujin Tag Arc focuses on a tag team tournament. The remaining Devil Knights fight Kinnikuman and his friends.

The final arc of the original manga was the Survivor Match for the Kinniku Throne Arc.

This arc features the Five Fated Princes — Super Phoenix, Zebra, Big Body, Mariposa, and Soldier.  These five are all contenders for the throne, and Kinnikuman must battle all of them to retain the title of prince of Kinniku.

Kinnikuman has a long list of themed characters worthy of a World Wrestling Entertainment roster.  Pretty much all of these characters, including Kinnikuman himself, are called Choujin (sometimes spelled Chojin). This term is typically translated as supermen or superhuman.

Some of the Choujin are good guys, some are bad guys and some do heel-face turns after losing to Kinnikuman.  Some of the major ones include:

Kinnikuman — A goofy, bumbling superhero who is also the prince of Planet Kinniku. His signature move is called Burning Inner Strength.

Terryman — He starts out as a cruel and arrogant Texan antagonist.  At first, he fought for money. He becomes Kinnikuman’s greatest ally.  He is a member of the Justice Chojin.

Robin Mask — A British fighter. He wears armor; most notably a medieval knight-style helmet.  He starts out as a villain and becomes a member of the Justice Choujin.

Ramenman — A Chinese martial arts expert. He starts out as very violent and brutal, and kills his opponents. He also becomes a member of the Justice Choujin.

Brocken Jr. — A German fighter.  He is the son of Brockenman. In his first appearance, he wants revenge for the death of his father.  He joins the Justice Choujin.

Warsman — A Soviet cyborg. He overheats after 30 minutes.  A member of the Justice Choujin.

Prince Kamehame  — A Hawaiian fighter.  One of the few to defeat Kinnikuman.  Teaches Kinnikuman.

Wolfman — A sumo wrestler who challenges Kinnikuman. He switches from sumo to Choujin wrestling. Member of the Justice Choujin.

Geronimo — A young Cherokee.  In some translations, his origin changes from Native American to British.

Throughout the long history of the manga and anime, our hero almost always wears a mask.  He even eats gyudon with it on.

The mask is expressive. For all practical intents and purposes, it is his face.  It can be easy to forget that he is wearing a mask.

However, it is a mask.  Kinnikuman follows a long history of masked wrestlers. Pro wrestlers have worn masks in the United States. They are especially popular in Mexican lucha libre.

When the mask does get damaged in the anime, hair can be seen underneath the mask.  Mantaro Kinniku also has a small tuft of hair which sticks out from his mask.

In one chapter of the manga, Robin Mask’s mask is removed.

Volume 36 of the Kinnikuman manga shows the title character with his mask partially off. He has a normal-looking mouth and one eye is visible.

Kinnikuman has a long history. It started with a manga in 1979.  The manga was published from 1979 to 1987 in Weekly Shonen Jump, the same magazine which featured Dragon Ball.  There were 70 volumes.

The manga was written by Yoshinori Nakai and Takashi Shimada, who use the collective pen name Yudetamago (“boiled egg”).

Another anime series was created in 1991.  This was called Kinnikuman: Kinniku-sei Oi Sodatsu-hen or Kinnikuman: Scramble for the Throne.  It is based on the Survivor Match for the Kinniku Throne Arc of the manga.

Ultimate Muscle and beyond

A new manga, Ultimate Muscle: The Kinnikuman Legacy or Kinnikuman: The Second Generation, started in 1998.  It lasted until 2004.

Ultimate Muscle is a sequel to the original series.  It features Mantarou Kiniku, or Kid Muscle. Kid Muscle is the son of Kinnikuman.

In Ultimate Muscle, the next generation of wrestlers is being trained.  The new characters include Mantarou, Terry the Kid, Gazelleman, Seiuchin, Kevin Mask, Jade and Dead Signal. Terry the Kid is Terryman’s son and Kevin Mask is Robin Mask’s son.

There is a school for young wrestlers. Mantaro must defeat his father to demonstrate that he is ready to graduate.

In 2001, another manga, Kinnikuman Nisei: All Chojin Dai-Shingeki, was created.  This is a different version of the same story from Ultimate Muscle.

The story is a time travel plot. Villains from the future travel back in time.  They intend to kill the fathers of the next generation of wrestlers.  If they succeed, the new fighters will be erased from history.

The heroic wrestlers must rescue their fathers and save themselves.

Finally, the manga Kinnikuman Lady ran from 2008 to 2013.  As the title implies, this version of Kinnikuman is female.  Pretty much all of the characters are female. In the manga, Meat’s mind moves into an alternate universe.  Meat trains Kinniku Lady, who is a princess of Planet Kinniku.

Kinnikuman Returns to the Pages of Shonen Jump After 11 Years