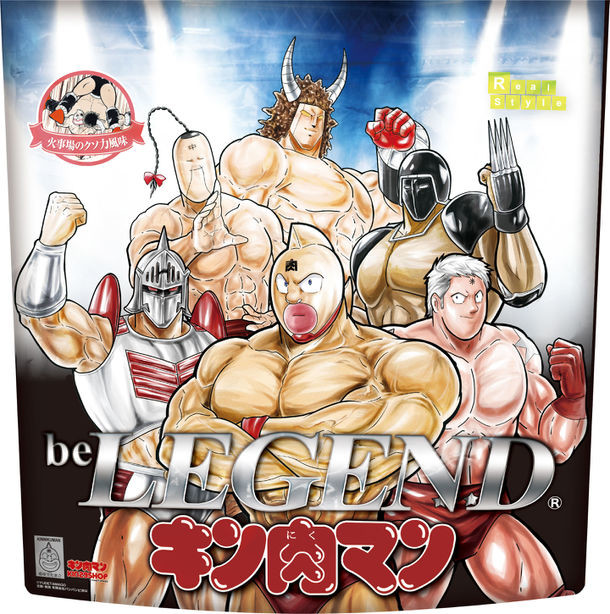 Kinnikuman is having something of a comeback recently. Not only is the iconic character returning to the pages of Weekly Shonen Jump after an 11 year absence, but he’s also a key figure in the newly opened Jump-themed tavern in Kabukicho – and now, he’s also set to receive his very own Kinnikuman brand of protein powder.

This new Kinnikuman brand protein powder comes courtesy of fitness and health company Real Style, who are producing the new product for a July 17 release via their official shop and website. Only one flavor has been announced for that date, that being pink grapefruit.

Ahead of the launch however, Real Style have unveiled the packaging for the Kinnikuman protein powder, which features Kinnikuman alongside other iconic characters such as Robin Mask and Warsman.

As you can see on the packaging, the new Kinnikuman protein powder is part of Real Style’s ‘be LEGEND’ line of protein powder products, which has already enjoyed several collaborations with other, similarly muscular pop culture franchises. These include Street Fighter, Dragon Ball and Fist of the North Star.

Real Style has been consistently crossing over with such franchises as, although it may sound ridiculous, they can actually provide a source of inspiration for those fans who want to get in shape and improve their own physique.

Weekly Shonen Jump, the most eminent home of muscular men and Kinnikuman, often features advertisements for weight training equipment and health products alongside advertisements of games and anime for this very reason.

Health and fitness companies other than Real Style have also long since recognized the inspirational potential of such franchises. BODYMAKER released some Dragon Ball sportswear earlier this year, and Asahi teamed up with Kodansha and Weekly Shonen Magazine earlier this week for a new campaign intended to ‘inspire’ the youth of today.

Kinnikuman’s new protein powder from Real Style might, then, push more than a few fans of the series to consider their health and take steps to improve themselves. While trying to gain the ridiculous physique of Kinnikuman himself might be impossible, it certainly can’t be a bad thing to try.

The Kinnikuman protein powder will be available to purchase via Real Style’s online store starting July 17.