Kinnikuman Returns to the Pages of Shonen Jump After 11 Years 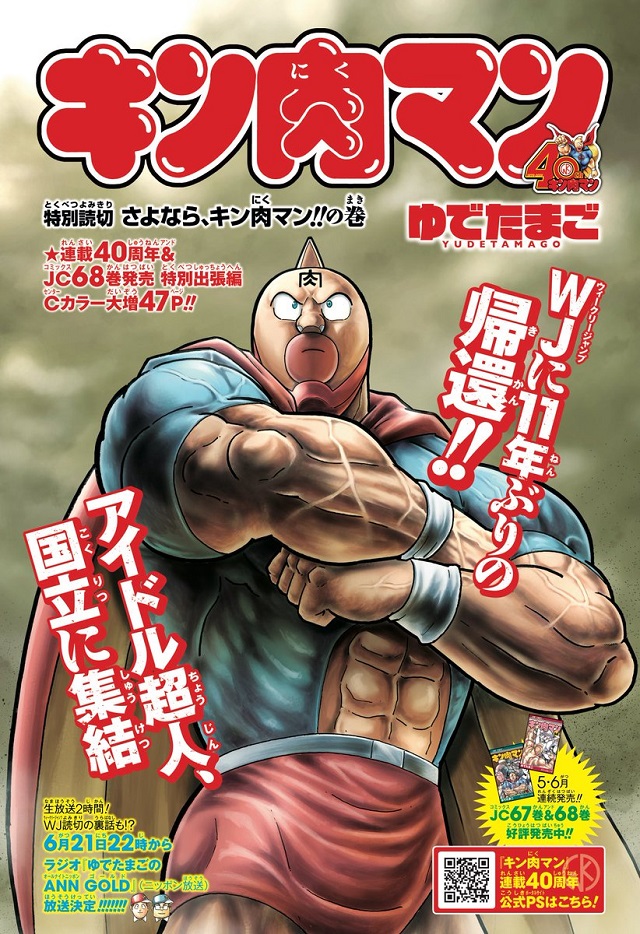 Yoshinori Nakai and Takashi Shimada, the two mangaka who make up the manga creation duo Yudetamago, have swung their iconic muscle-man Kinnikuman back into Weekly Shonen Jump for the first time in 11 years. Kinnikuman triumphantly returns to this year’s 29th issue of the weekly manga in the form of a one-shot story titled, “Sayonara, Kinnikuman!! no Maki” (The ‘Goodbye, Kinnikuman’ Story). The one-shot is 47 pages long, and the issue that it is featured in released on June 17.

Fans of the series say that this is the perfect time for the series to make its return, and that there’s no better place but Weekly Shonen Jump for the hero to resurface. The original ran for a whole 8 years, from 1979 until 1987. We saw the muscle man make a brief return in 2011 when Yudetamago decided to bring back the series as a free web manga, picking up where the story left off 24 years prior. New chapters of the online manga were posted every Monday at 10:00 a.m. Japan time.

The ultra-popular Kinnikuman series has inspired a lot of merchandise, spin-off manga, anime, and even video games. Kinnikuman even has his own store in Nakano Broadway in Tokyo. In the 1980s, Kinnikuman figures were sold in the United States under the brand name “M.U.S.C.L.E”. The figures were just one color of plastic, most frequently a peachy flesh-tone, maybe you remember them. The Kinnikuman anime saw 137 episodes between April 1983 and October 1986. After that came the Toei-produced  Kinnikuman: Kinniku-sei Ōi Sōdatsu-hen anime, which ran for 46 episodes from October 1991 to September 1992.

Our man Kinnikuman has seen a lot of action since his conception at the very end of the 1970s. The title of his new Weekly Shonen Jump one-shot special sort of implies that we won’t be seeing him again for a while, but I have a feeling that he’ll make an appearance again when the time is right.

You can check out Kinnikuman manga covers and more of Yudetamago’s works on their official website.