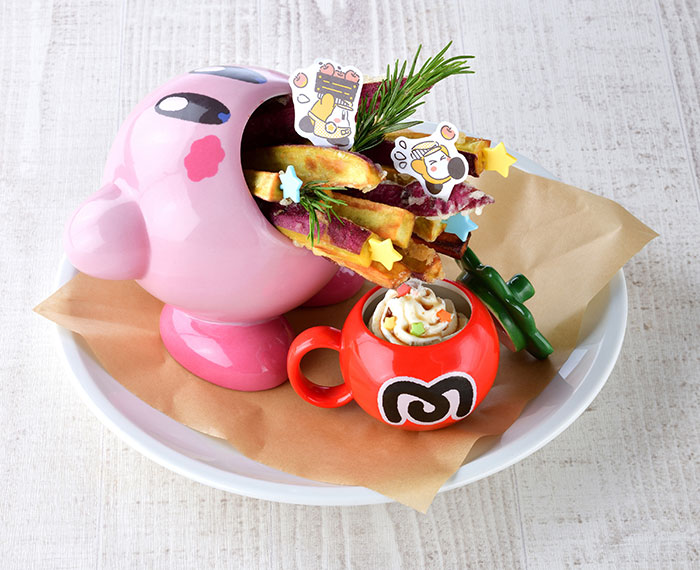 The Kirby Cafe has been a gift that keeps on giving for both gamers and foodies. For the past few years, it has brought on a plethora of entrees inspired by the longrunning Nintendo franchise, such as the Sakusaku Warp Star Apple Pie and the Waddle Dee Napping Rice Omelette. We here at OTAQUEST have written extensively about this place, and it looks like we’re doing it once again. Because now, three more items have been added to the menu, just in time for autumn.

The first new addition “Manpuku! Autumn Color Plate,” a cream-based salmon pasta dish coupled with a small pumpkin sandwich and a side salad, the latter two of the three invoking some serious harvest vibes. Then there’s the “Mont Blanc Baumkuchen with Fallen Leaves”, itself a German-inspired chocolate cake dish garnished with mint. And finally, there’s “Kirby’s Hot Potato Sticks,” a type of french fry meal cooked with rosemary-flavored butter (which apparently is so good that the promo features Kirby swallowing them whole).

This news comes off the heels of the Kirby cafe announcing special summer-themed meals plus take-out personal pizzas back in June, as well as a sleepy Kirby plushie and special pancake cooking pan being added to the cafe’s gift shop just the other day.

It seems nothing is slowing the Kirby Cafe’s business down. The Coronavirus epidemic would temporarily put the cafe on hold for a short two months, but it would seem that the pandemic’s viralic might can’t stop the cafe from eagerly preparing for the fall season. And to that, we tip our chef’s hats and say, “Bon appetit!” (or “puyo,” if you’re a Kirby purist).

These three menu items are expected to be added to the menu on September 18.