KMNZ Is a Virtual Duo On The Rise 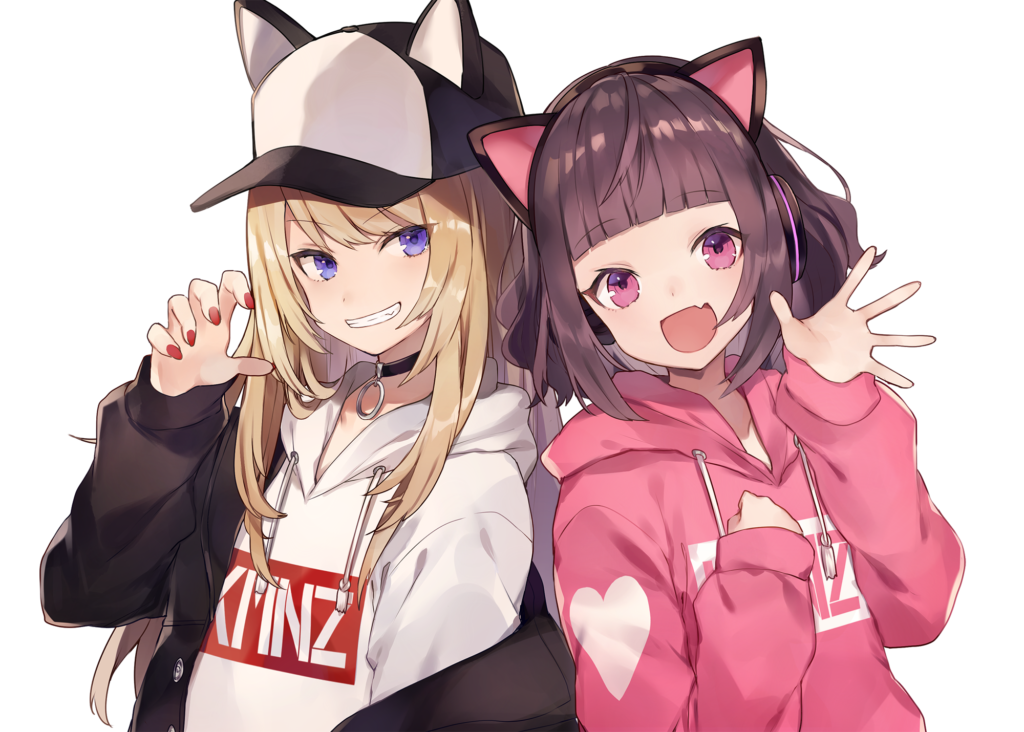 KMNZ is taking the virtual YouTube world by storm. The hip-hop duo has only been on the scene for a couple of years, but they have definitely made their mark. Comprised of two members, Liz and Lita, KMNZ continues to expand their empire, and shows no signs of slowing down.

As defined by Wikipedia, a virtual YouTuber, or VTuber, is an online entertainer who is represented by a digital avatar. Virtual YouTubers use computer-generated characters to communicate with their followers on the YouTube platform. In 2011, vlogger Ami Yamato became the first person to use a CG character on YouTube.

VTubers do exactly what their human counterparts do on the platform: play video games, test out new apps and products, chat with fans, livestream, vlog, and in the case of KMNZ, sing and dance. They are operated by humans who use 3D software and motion capture technology to emulate the emotions, movements, and expressions of a real person. Most of the time, these avatars take the form of an attractive young woman, but that doesn’t necessarily mean the person voicing and operating them bears the same appearance in real life.

VTuber Yekomasu, for example, looks like a young woman, but has the voice of a middle-aged man. Other VTubers, including Kaguya Luna, may look like anime characters and have a cartoon voice to match, but tend to speak in an unexpected manner, using foul language or playfully jabbing fans while interacting online. It is this element of surprise, says journalist Minoru Hirota, that is part of what is making these avatars so popular.

Though some of them may resemble classic anime characters, VTubers are different in that they often do not adhere to a script. In a market that is over-saturated with scripted, animated content, and real-life human vloggers, VTubers fill the gap by being a computer-generated image that acts of its own free will. For those who spend time watching a lot of YouTube content, this is presumably a refreshing take on a familiar form of entertainment.

Not only does this type of online performance appeal to the audience, it also appeals to the performers. Virtual YouTubing provides the opportunity to express oneself behind the mask of a character, and behind the protection of the Internet. Virtual YouTubing allows someone who may be a shy, talented performer to comfortably share their gifts with a huge audience.

It is unknown who the humans are behind the duo of KMNZ. And who knows if VTubing offers them the anonymity they need to feel confidence when performing. Either way, KMNZ is benefitting from an innovative new way to perform for millions of people.

KMNZ is short for “kemonozu”, from the Japan word kemono, meaning “beast” or “animal”. A fitting name for this band, as the Liz and Lita avatars sport costumes with animal ears and tails. They claim to be otherworldly, and from the land of Kemomimi.

Though they may dress similarly, Liz and Lita are two unique characters. As Lita’s introduction video states, she loves theater, music, and is bad with athletics, and hates chocolate and celery. Liz, the brunette, likes drawing, singing, and hates meat.

KMNZ’s first single, Virtual Reality, came out in August of 2018. A music video for the same song followed in March of 2019. They quickly followed up with a second smash hit, “Augmentation”, in April 2019. In a short amount of time, the duo has collaborated with Moe Shop and Snail’s House; KMNZ Lita released a cover of tofubeats’ “Suisei” with VTuber YACA, a virtual alligator.

This not only shows how hard-working the duo is, but how truly talented and unafraid they are. Covering popular songs and collaborating with huge names in music is no easy feat as a seasoned musician; KMNZ is new on the scene and already looking to take on impressive projects.

In her introduction video, Lita mentions that her dream is to one day do a live event. She and Liz very quickly reached that goal in February 2019 when they hosted a VR Live event for cluster. It was so successful, they hosted a second event that April. They also participated in a Fuyujime event that featured other VTubers, and now host their own talk show on Tokyo MX called VIRTUAL BUZZ TALK!

In November 2019, KMNZ released their first album, KMNVERSE. Recently, they provided the soundtrack for a promotional tourism video for JR West. As KMNZ continues to build credits and relationships, there is no telling where their talent and hard work will take them next.

‘REALITY’ Will Allow Anyone to Become a Virtual YouTuber