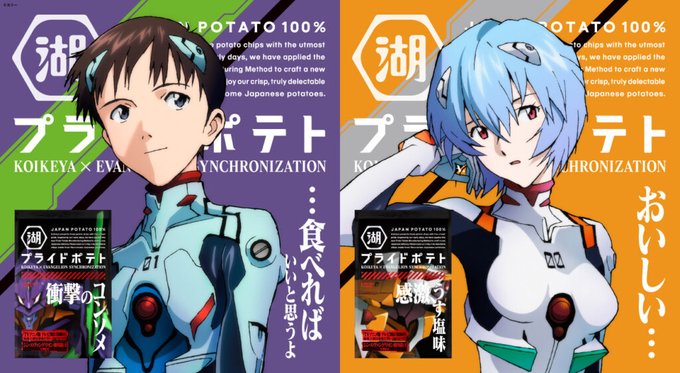 Sometimes there’s nothing better than to eat food while binging your favorite anime. It can be as fancy as bistecca alla fiorentina, or as simple as your favorite snack food. In Japan, there’s no shortage of anime-crossover snacks, with popular franchises like One Piece, Dragonball Z, and Cardcaptor Sakura all getting their own tie-ins. Of course, Neon Genesis Evangelion, being the megahit franchise that it is, has gotten more than its fair share of snack food tie-ins. And just recently, it’s gotten another one.

On Monday, the popular Japanese snack company Koikeya released a line of Evangelion-themed potato chips. Made to advertise the highly-anticipated (as well as highly-delayed) upcoming Evangelion 3.0+1.0 movie in the legendary franchise’s Rebuild series, these chips come in two different flavors and four types of packages, each of them featuring one of the film’s four main characters. You’ve got Shinji and Asuka representing the Shock Consommé flavor, and Rei and Kaworu representing the Sensational Usui Flavor. 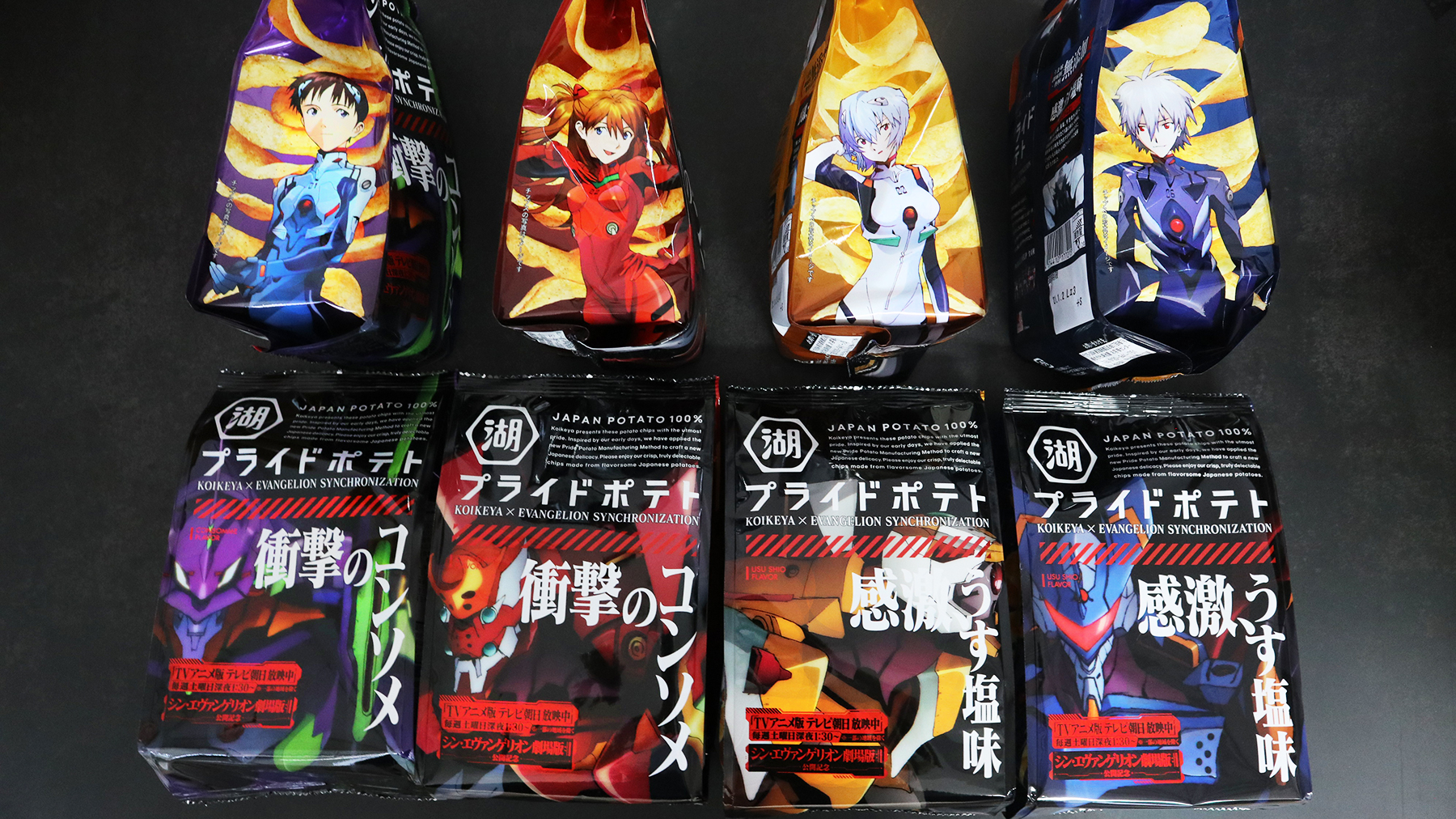 These potato chips are also part of Koikeya’s Pride Potato line-up that made its debut back in February 2017. Made with freshly-peeled potatoes from local Japanese farms, the Pride Potato chips became an instant best-seller when it hit shelves. It actually got to the point where two of its flavors, Hint of Matsutake Broth and Tempting Roasted Wagyu Beef, sold out in stores everywhere almost immediately.

This is not the first time Koikeya has created anime-themed snack food. Just last week, they released their own Pikachu 10 Million Volt Thunderbolt potato snacks, made in collaboration with The Pokemon Company. Back in 2017, Koikeya came out with a Detective Conan-themed brand of chips to promote the then-upcoming Crimson Love Letter movie. And in 2014, they would come out with their own special brand of Sailor Moon tortilla chips to promote the reboot series Sailor Moon Crystal. These chips would have all five Sailor Scouts plus Tuxedo Mask each having their own unique bag across a variety of three different flavors. Because of course, when you think of avocado cream cheese, you definitely think of Sailor Moon.

As part of the release’s commemoration, Koikeya announced on Twitter that they are giving away a special Limited Edition box set to a lucky five people. To participate in this giveaway, contestants are asked to retweet the Tweet. The five winners will be chosen at random, so there’s no predictable outcome here. However, one thing is for certain: this snack-related phenomenon certainly will give new meaning to the age-old saying, “I’ll take a potato chip and eat it.”