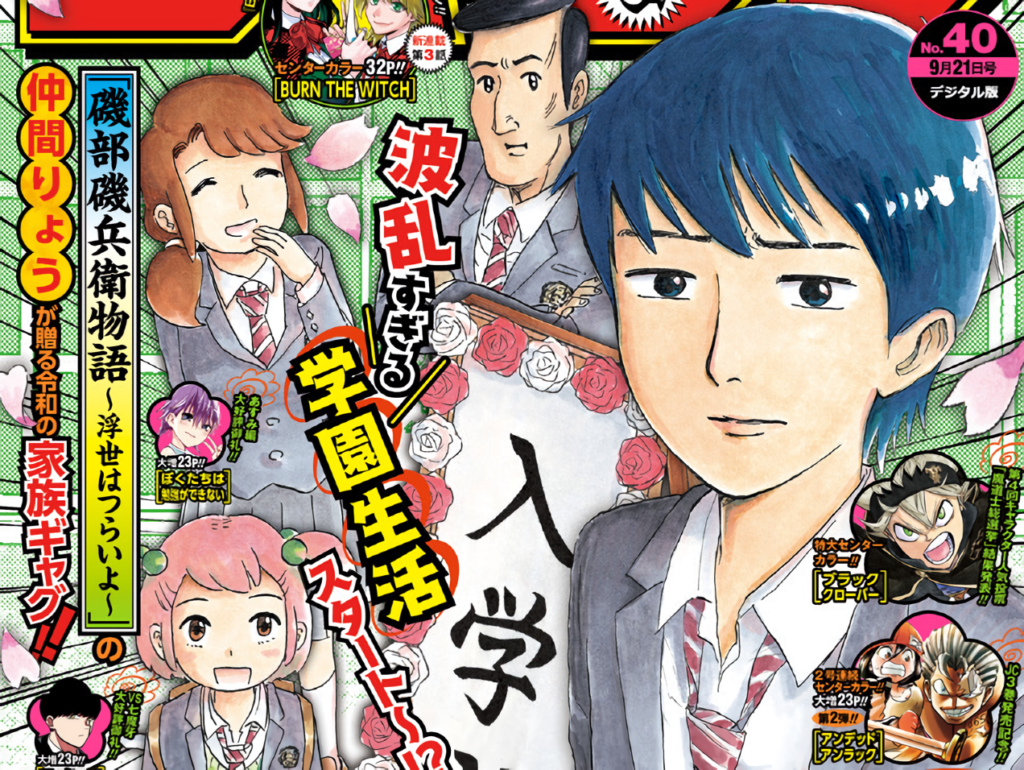 The beginning of a new week can only mean one thing: time for new Weekly Shonen Jump! Shueisha’s legendary manga magazine has been releasing every week for over 50 years at this point, and it still has enough exciting series in its roster to justify its hallowed status. Plus, with VIZ Media now publishing the entire thing in English, there’s never been a better time to dive in. In this column, Jacob investigates the latest and greatest in the world of Weekly Shonen Jump, telling you what’s worth your time and what’s not. This week, we’re chatting High School Family: Kokosei Kazoku chapter 1 (and 2!), Me & Roboco chapter 8, and Magu-chan chapter 10.

It’s a gag manga bonanza in this week’s edition of Jump Time! The new series continue this week with Kokosei Kazoku, although next week will be our last with Bokura no Ketsumei. I would like to translate that title as Our Blood Oath, but considering the inventive choices VIZ have been making with Phantom Seer (titled The Faintly Visible Boy in Japanese) and adding High School Family before Kokosei Kazoku, I wouldn’t want to jump the gun. As an aside, thanks to everyone who checked out my piece on Shiro Usazaki over the weekend – hopefully, I was able to do her legacy and work justice, as well as draw a bit of a line under the entire incident. That’s what many fans, including myself, need right now – a bit of closure, which I was hopefully able to provide. Anyway, on with the manga.

Ryo Nakama is a bit of a fan favorite in Weekly Shonen Jump. His last series, Isobe Isobee Monogatari, proved popular enough as a one-shot in June 2013 to return later on that year as a proper series, even though it was only intended to replace One Piece for one week as Eiichiro Oda was suddenly rushed into hospital. With this in mind, it would be fair to expect that Nakama might bring at least some of this magic to Kokosei Kazoku chapters 1 and 2 – unfortunately, however, that doesn’t appear to be the case.

In general, even though the first two chapters of this series were published at the same time, it doesn’t feel like there is much to judge it on. In total, these two chapters come in at a little over 42 pages, which is far less than the regular 60 or so pages normally afforded to new series in Weekly Shonen Jump – keep this limitation in mind, then, as we go on to critique Kokosei Kazoku chapters 1 and 2. 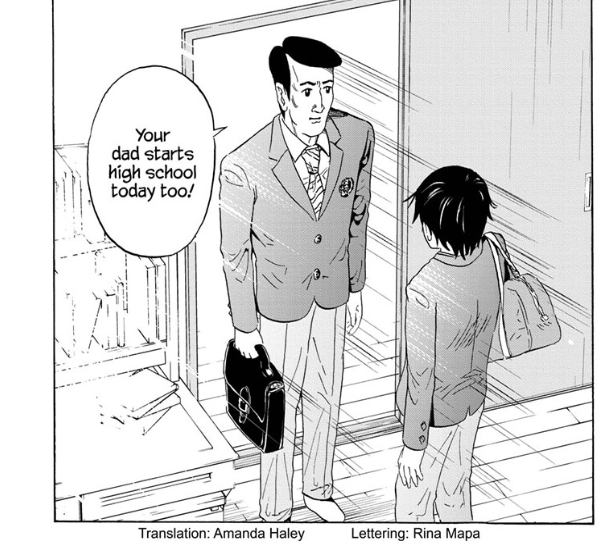 The concept for the series is pretty much as it says on the tin. Koutarou Ietani, 15, wakes up one morning to find that his entire family is enrolling in high school alongside him – his father, Ichirou Ietani; his mother, Shizuka Ietani; his little sister, Haruka Ietani, and even the family cat, Gomez (no last name).

Kokosei Kazoku chapter 2 then carries on from this premise as established in chapter 1, following the family as they enter high school for the very first time. And try as he might, Koutarou isn’t able to stop his parents and siblings from attracting a lot of attention to themselves, most especially during the student orientation.

There are some good moments in Kokosei Kazoku chapters 1 and 2. When Koutarou is finding out to his horror that his whole family is coming to high school with him in chapter 1, the revelation is delivered with a good amount of comedic pacing through the use of repeated lines and panel layout. Chapter 2 then elicits some chuckles as it turns out that Haruka has been chosen as the student representative due to her high exam score, and the way that she introduces her family is both humorous and bittersweet.

Nevertheless, if Shueisha was expecting an instant hit along the lines of Isobe Isobee Monogatari, then they were sorely mistaken. There isn’t that much to rave about when it comes to Kokosei Kazoku chapters 1 and 2, mainly because it has quite a straightforward premise – it goes to exactly the kind of places you’d expect.

Compared to Isobe Isobee Monogatari, Kokosei Kazoku feels distinctly average. Whereas Isobee was set in the Edo period, Kokosei is set in the modern day. While Isobee is presented in an ukiyo-e traditional art style, Kokosei just looks unrefined. And while the prospect of seeing how a slacker samurai might behave in medieval Japan is exciting, seeing how a teenage boy might react to his whole family coming to school with him is exactly as you’d expect.

But, then again, I suppose I didn’t hate Kokosei Kazoku immediately upon launch like Me & Roboco, and a 12-page series at the back of the magazine isn’t really going to have much of an effect on the overall quality of Weekly Shonen Jump in the grand scheme of things. Perhaps the best thing to do is to temper your expectations a little bit, as an instant viral hit this ain’t.

Speaking of Me & Roboco, my relationship with Shuhei Miyazaki’s comedy series has been complicated as of late. For every chapter that has made me laugh, such as chapter 3, I have been pretty unimpressed with such installments as chapter 7, which go in strange, uncomfortable directions. Nevertheless, Me & Roboco chapter 8 does happen to be one of the former – one that elicited several chuckles while also making some interesting references.

Call me crazy, but I’m fairly convinced that Me & Roboco chapter 8 is a parody of ‘The Greatest Robot on Earth’ arc from Astro Boy. This arc from Osamu Tezuka’s classic manga was later adapted by Naoki Urasawa into the murder mystery Pluto and is widely considered one of the best, if not the best in the long-running series. 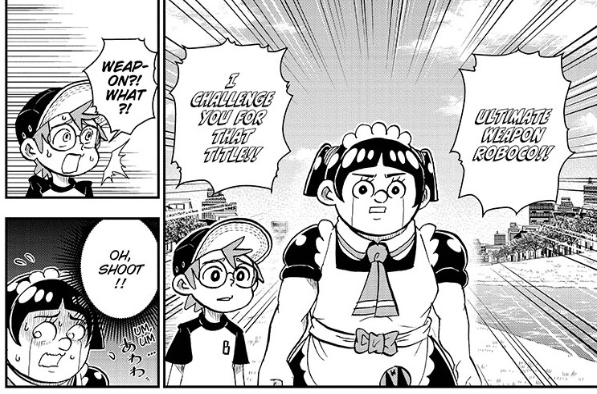 What makes me think that Shuhei Miyazaki is taking notes from the ‘God of Manga’ himself is the fact that Roboco is declared to be “the ultimate weapon” by her many opponents. This title immediately made me think of Pluto from the aforementioned series, who sets about destroying the seven strongest robots in the world to prove that they are, in fact, the greatest robot on earth.

Only, in Me & Roboco chapter 8’s case, the situation is reversed: the strongest robots in the world come to challenge Roboco, even if she isn’t interested. Furthermore, this structure is basically the same as Osamu Tezuka’s classic arc: repeated battles between opponents, only without any such characters as Astro or Uran.

You may think I am taking this comparison a little too far, but it would serve to illustrate how influential Astro Boy has been on the representation of robots in manga, as well as Japanese media in general. It’s hard to think of a world where Shuhei Miyazaki isn’t acquainted with the works of Osamu Tezuka, if not intentionally using them for purposes of parody. 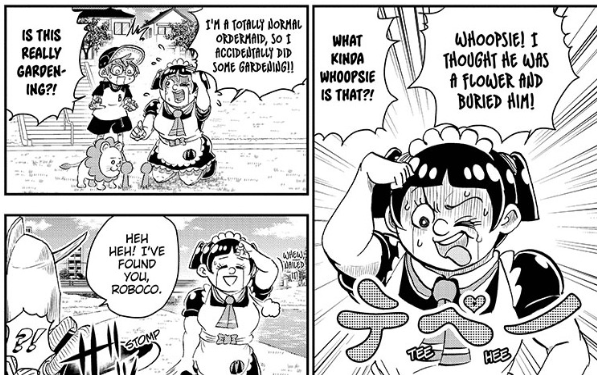 Either way, Me & Roboco chapter 8 is also quite funny. To a certain extent, it benefits from this repeating structure, taking the joke further and further each time a new opponent appears. But there is also the dialogue: each time Roboco defeats an opponent, she attempts to pass it off as some sort of innocuous act natural to an Ordermaid. Bondo, of course, isn’t buying it one bit.

This also feeds into what one friend of mine described as one of the series’ strongest points: the mystery of Roboco’s past. Trying to figure out what on earth she was made for and how she ended up with Bondo is apparently half of the fun, and while this has never been enough to entertain me in the past, I can certainly see the appeal in Me & Roboco chapter 8. The obvious disparity between her violent actions and barely believable excuses is hilarious, and might even offer some answers to those searching.

Finally, we have Magu-chan chapter 10. I have been a fan of Kamiki Kei’s supernatural comedy series since the very beginning, and I must say that the rookie author hasn’t dropped the ball one bit – delivering chapter after chapter of entertaining Lovecraftian antics with a sweet love story to boot. Only, reading Magu-chan chapter 10 was when the penny finally dropped and I finally realized why I love the series so much.

In many ways, Magu-chan reminds of an old Saturday morning cartoon. This is partly because of the cartoonish designs for both the human characters and primordial ones, but also because of how well defined these characters are. Just like any classic Looney Tunes short or even an episode of Lupin III, it feels like you could insert the cast of Ruru, Magu, Napu et al. into any situation and get some laughs out of it. That’s something that a lot of the other gag series running in Weekly Shonen Jump don’t have. 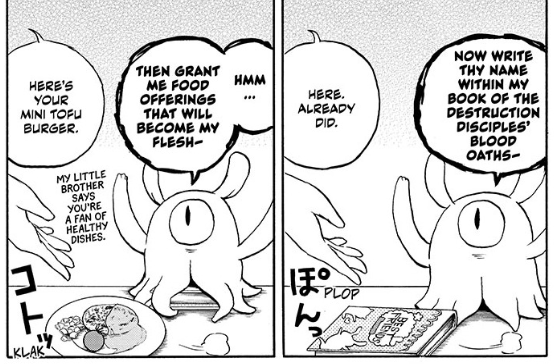 Magu-chan chapter 10 is, in turn, a perfect example of this. The antics this week revolve around Ruru and Magu visiting the Fujisawa family restaurant at the behest of Ren’s sister, Rin, and dealing with an unexpected attack from Magu’s rival, Napu. Things play out almost exactly how you would expect, but that’s half the fun: part of the appeal of episodic comedy series such as these is knowing where things will end up based on the characters’ temperance, eventually resetting to the status quo.

Only, Magu-chan chapter 10 is not entirely episodic, nor is it entirely based on well-defined characters. For one, it continues on from last week’s chapter, picking up the thread wherein Magu gave Rin their BFF book, and also takes the time to introduce a new character, Rin, who is like the ultimate big sister. She even gives Naputaaku a good pep talk at the end, which is nice.

Furthermore, the actual A-to-B route to resetting the status quo is quite entertaining and develops in surprising ways. Once Magu is trapped by Napu in the trash can, the God of Destruction is forced to regenerate their body into a miniature form and traverse a busy kitchen, like something straight out of Ratatouille. There’s even a fair bit of tension as they do so, making for an effective climax.

If my mind wasn’t already made up on the merits of Magu-chan, then chapter 10 has certainly pushed me over the edge. There’s nothing else quite like this in Weekly Shonen Jump that gives me quite the same warm, comfy feeling, and much like Agravity Boys chapter 32 two weeks ago, Magu-chan chapter 10 is also the chapter that has convinced me to collect the series physically as it releases in volume format. Incidentally, I wrote a long editorial on this last week that might prove useful to anyone wondering how to do so for themselves!

You can read High School Family: Kokosei Kazoku chapter 1 and 2, Me & Roboco chapter 8, and Magu-chan chapter 10 for free via VIZ Media’s Shonen Jump.