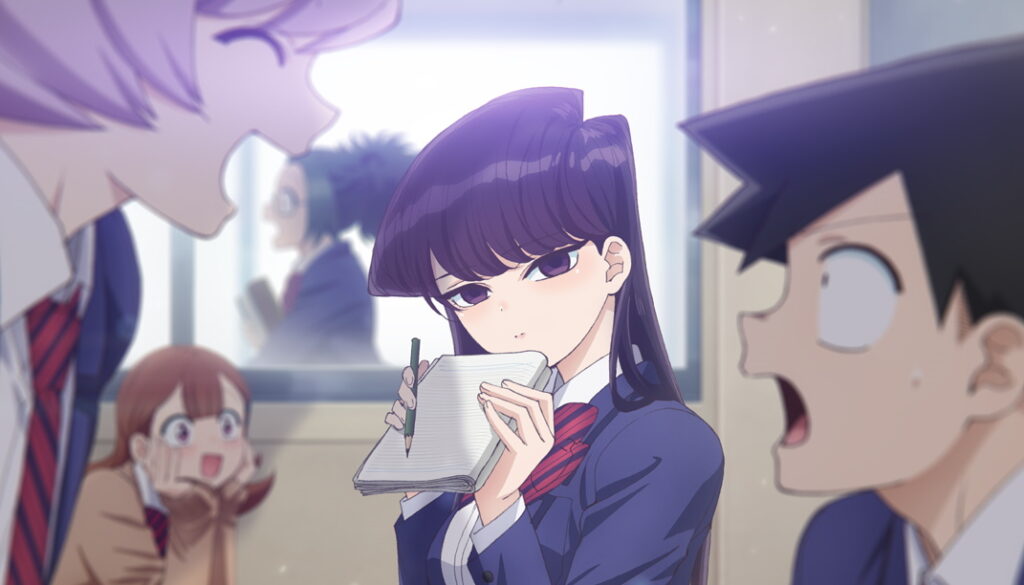 It’s been a long time coming, but a Komi Can’t Communicate (Komi-san wa, Komyushou desu) anime is finally on the way!

Based on the manga of the same name by Tomohito Oda, it has been serialized in Weekly Shonen Sunday since 2016 to great acclaim. In fact, just last year, it topped AnimeJapan’s annual poll to find out which manga fans most want to see animated, and Hope Kim put out a great article on this site giving five reasons why the series deserved an anime.

Rather impressively, it also currently has over 5.2 million copies in circulation, all without the added promotional help of an adaptation.

With this in mind, a Komi Can’t Communicate anime was always bound to happen sooner rather than later, but the PV alone makes it clear that it was worth the wait. Animated by production studio OLM (perhaps most famous for the 1997 adaptation of Berserk, but they’re also doing Odd Taxi this season) and featuring voice performances from Aoi Koga (Komi) and Gakuto Kajiwara (Tadano), it’s as much a treat for the ears as it is the eyes.

To be honest, I wasn’t expecting much from just under a minute of footage, but the little editing touches in time with the music and the way that Oda’s original designs look in animation now have me very excited.

Looking further down the staff credits, there’s even more reason to get excited for the Komi Can’t Communicate anime. While chief director Ayumu Watanabe was behind the disappointing Children of the Sea, he also directed the very competent adaptation of After the Rain over at WIT Studio. The same goes for character designer Atsuko Nakajima: she was involved with the messy two seasons of Tokyo Ghoul:re, but also served as chief animation director on many episodes of the excellent Shouwa Genroku Rakugo Shinjuu.

What’s more, we already have a release date: this October! You can look forward to the Komi-san Can’t Communicate anime then, but feel free to follow the official Twitter account for more information in the meantime.