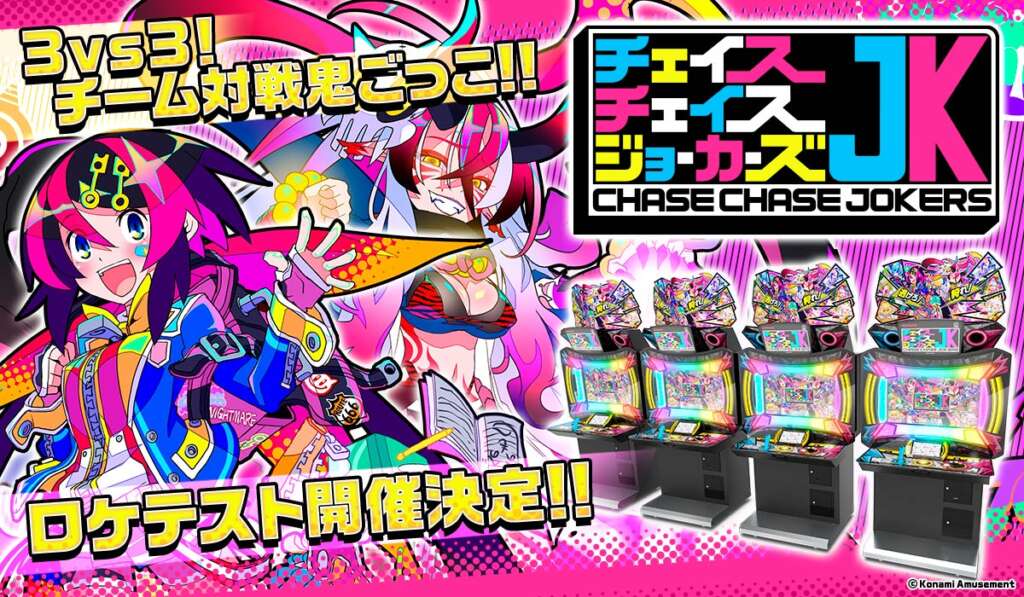 Konami took to twitter earlier today to announce the first location test for a brand-new arcade title, CHASE CHASE JOKERS, will be taking place next week in Tokyo. With a focus on multiple, the title is a 3v3 game that sees teams of players participating in a game of virtual tag using characters with distinct personalities and full voice acting as their avatars.

Upon first glance I get really strong vibes that this is an attempt to kick-start a brand new IP with the potential for mixed media to roll out in the near future. CHASE CHASE JOKERS has a very strong, vibrant visual personality and each of the characters shown in the debut trailer appear to be fully fleshed out with established voice actors bringing them to life:

Based on the trailer the gameplay looks like a lot of fun as well, with players racing in a maze to collect keys and avoid being tagged by their opponents. The controls are made up with a thumbstick for movement, buttons to trigger different actions such as sliding, jumping, and character unique skills, and a touch screen, which if I had to make a guess, will likely be used for menus and maps.

The first location test takes place at Tokyo Leisureland 2nd Store in Akihabara from March 11-13th. Players who participate in the test will be entered into a lottery for a chance to win autographs from the VAs appearing in the game, as well as one of two limited edition e-amusement card designs. The location test will also feature a Bombergirl cross-over, with players being able to earn a special PINE costume to use in Bombergirl for participating.

Although this is just the first real announcement for the title, it already seems like Konami has some big plans in mind. Only time will tell.

Check out the official CHASE CHASE JOKERS Location Test page for more information on both the game and the upcoming test.