I think that the amount of events that have been happening in beatmania IIDX 28 BISTROVER is far more than any version of IIDX ever. Today Konami kicked off a new event with the Bemani Pro League called the EVERYONE SUPPORT! BPL Pro Player Supporters Event where players can support their favorite teams and players and even earn content to use in-game. 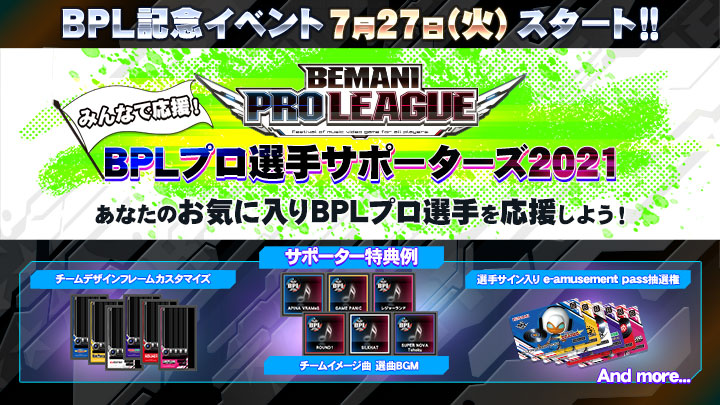 The event works like similar previous events where each play of a game earns you a specific number of support points where you can choose to place them on the player of your choosing. The point breakdown is as follows:

Can be earned with each game

Can be earned once per day

Can be earned once per week

By earning a specific amount of tickets, you can unlock content related to the team that the players you support play for. The unlocks are as follows;

I think it goes without saying that the theme songs for each team are bangers and I really, really wished that we were going to get to play them in-game, but they have been relegated to being song select theme songs that you can unlock with a specific amount of tickets.

The event kicked off today and will run through 13 September 2021. So, if you live near a Round1 location in the world, make sure you hit it up and start earning those tickets.