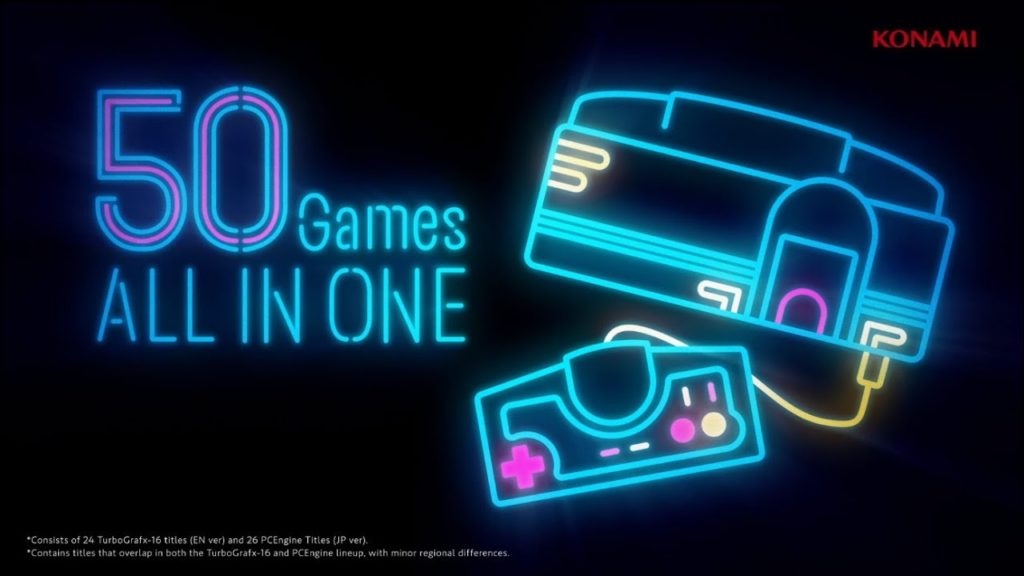 KONAMI has announced their entry into the mini console bandwagon with their tiny-size remake of the TurboGrafx-16 Mini. The shrunken down console will be available exclusively from Amazon from March 19, 2020, with pre-orders starting on July 15 this year. No price for the USA version of the console has been announced yet. However, based on the announced price of 10,500 yen for the Japanese version of the upcoming miniature console, the assumed price will be around 100 USD.

The TurboGrafx-16 Mini is set to come with a pretty sizable game list; 24 American-version TurboGrafx games and 26 Japanese-version PC Engine games, making 50 total games on release. Included in this impressive list are games such as Bomberman ’93, Bonk’s Revenge, Space Harrier, and R-Type. Some of the games are untranslated Japanese language games, which are also on the console as English games, making for a few redundant titles. However, it’s an impressive lineup nonetheless. The design of the console will differ depending on which region you’re ordering from, being that the console was originally the TurboGrafx in the USA, PC Engine in Japan, and CoreGrafx in Europe, making for 3 different varieties of the same console. The PC Engine & CoreGrafx were already pretty small consoles compared to competitors such as the Famicom & NES, so the mini version will be truly bite-sized.

The TurboGrafx-16 originated in Japan as a 16-bit console called the PC Engine which released back in October 1987. The console was a collaborative effort between Hudson Soft and NEC, with strong third-party support from KONAMI and Namco. The PC Engine quickly became the Famicom’s main rival, and PC Engine sales actually surpassed Famicom sales in Japan. This put Hudson Soft and NEC way ahead of Nintendo, and even further ahead of Sega. However, due to poor marketing in the West, the TurboGrafx-16 did pretty poorly in the USA. Maybe the release of the TurboGrafx-16 Mini will bring about a second chance for this underrated treasure.