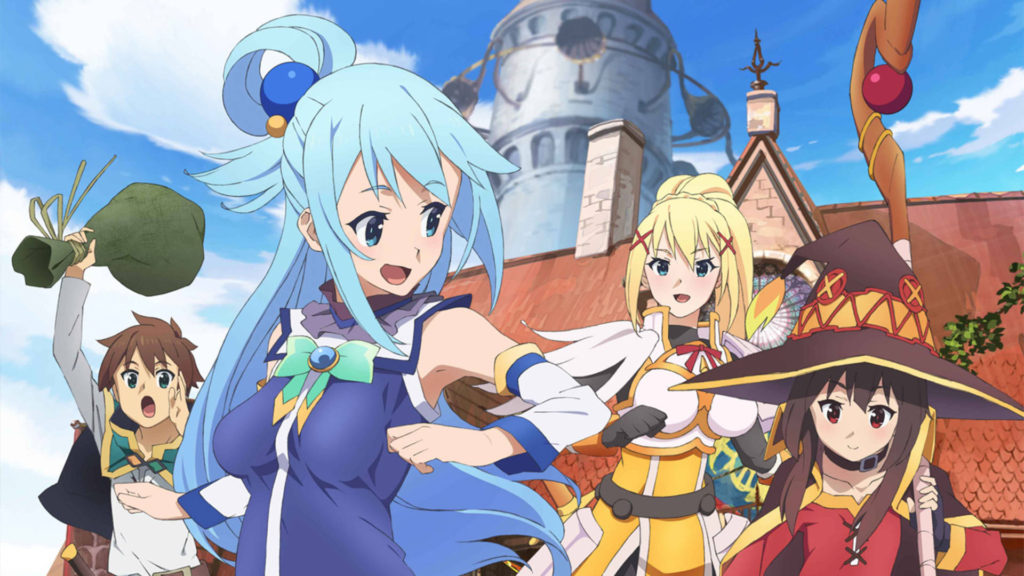 When it was announced last year that KonoSuba – God’s blessing on this wonderful world! Would be getting a film project, I nearly keeled over out of pure joy. Upon seeing this news begin to develop from yesterday, however, it started to dawn on me just how long we’ve gone without any official updates. The reason for that being the case, however, is likely because I was just enjoying the light novels and various spinoffs that author Natsume Akatsuki has been writing. As this news finally comes out, it all makes perfect sense — perhaps the most popular character takes front-and-center in the new visual. That’s right, it looks like Megumin will be taking the lead as the visual and title of the movie, KonoSuba – God’s blessing on this wonderful world!  Crimson Legend, seems to imply. Anyone who has watched the series knows Megumin’s affinity towards the color and her spinoff light novels remain popular sellers. The whole cast and key staff will be returning to reprise their roles in the new project, with one surprising change — the movie will be animated and produced by studio J.C. Staff, rather than Studio DEEN from the two seasons of the TV show. It’s still on track for a theatrical release sometime next year.

Another surprise announcement was the confirmation of a new game in development for the PlayStation 4 and PlayStation Vita. It’s currently without a subtitle in its name, but series theme song regular Machico will perform ‘Stand Up! For the first-person dungeon crawling adventure. This game already follows a visual-novel style adventure, and I’ll definitely be happy to get more in the way of official character art! Peek the teaser trailer and visual below! I’m happy these updates have finally been revealed, and am looking forward to a whole lot more KonoSuba goodness to explode onto the scene next year! If you haven’t given the series a try yet, the anime is a perfect way to start. Rarely have I seen a slapstick comedy that is so on the mark with its timing, as well as taking full advantage of the quirky personalities of its main characters. Yen Press is also currently releasing the light novels in North America, and you can find their official synopsis below.

Game loving shut-in Kazuma Sato’s life as a young schoolboy in Japan abruptly comes to an early end…or at least it was supposed to. When he opens his eyes, though, he sees a beautiful goddess that offers him a once in an after-lifetime chance to be reborn in a parallel world. The catch is that the world is violent and threatened by a growing evil! Fortunately, he can choose any one thing to bring with him. So he chooses the goddess, Aqua! And so his adventure with his gorgeous companion begins–if he could just get enough money and food to survive, keep his goddess out of trouble, and avoid grabbing the attention of the Demon King’s army!