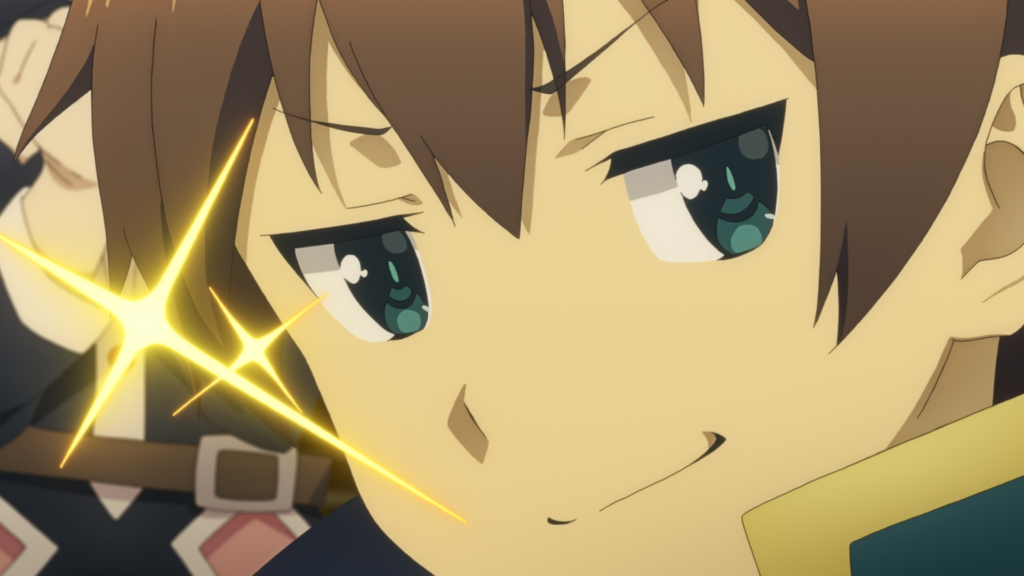 The first full-length trailer for the long-awaited Konosuba movie was revealed in the most Konosuba way possible – on stage together with a “Who Wants to Be a Millionaire” parody where the contestants were the members of the cast.

The festivities at “KONOSUBA-God’s blessing on this wonderful world!-Legend of Crimson special stage” were kicked-off in high gear as the cast came out with an explosive flair. Rie Takahashi (Megumin), Ai Kayano (Darkness), Aki Toyosaki (Yunyun) and Jun Fukushima clad in the classic Kazuma Jersey had an energy that made it pretty obvious that they were excited about this movie (Aqua’s actress Sora Amamiya was not present at this event).

In celebration of the 6th-anniversary of Anime Japan and Konosuba’s prominent presence at the show, Megumin’s key image in the official promotional material was highlighted — a fitting character choice, given how the rest of this event went down. The MC fired-up the crowd and announced very plainly that this would be dedicated solely to new movie information. Aki Toyosaki was given a special spotlight as she stressed that her character was going to have a drastically more prominent role in this work than she ever had before. 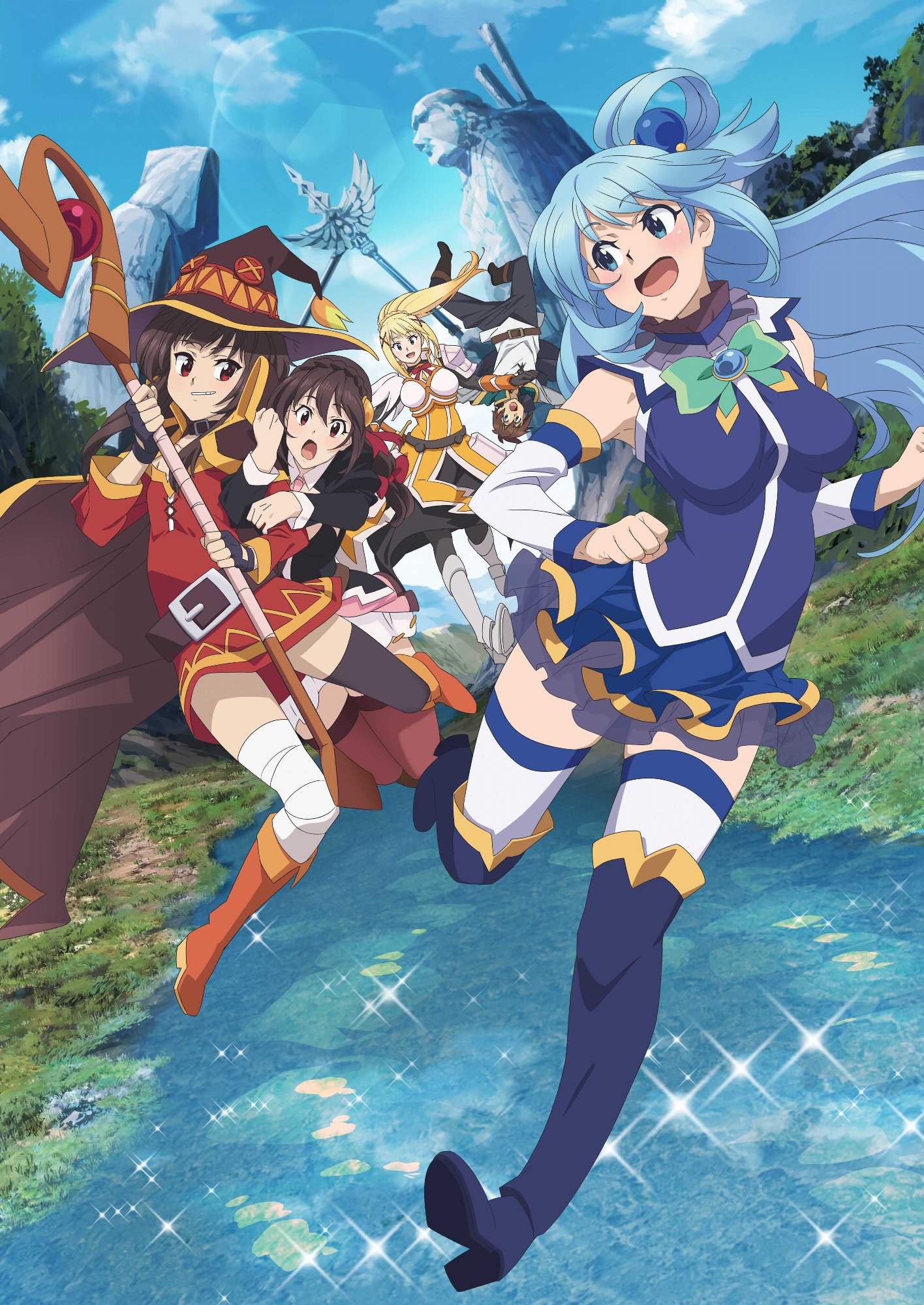 It was now time for the talk event to begin, and the MC opened strong — describe Konosuba using just four Japanese kana letters. Jun Fukushima leads the pack with かなさき (Kanasaki), the name of the anime series’ director. He mentioned how passionate he was about Konosuba as a whole, and how he was an invaluable asset to the voice acting team as well, guiding them through the storyboards but leaving a lot of room for improvisation. Rie Takahashi was next, using 3 numbers and only one Japanese with 850万 — that’s 8,500,000 units in the Konosuba series sold. Quite an explosive number for a primarily anime/light novel series (I won’t apologize for all the explosion puns)! Next was Ai Kayano, who used the word げきだん (gekidan), meaning a troupe of performers. And no, Konosuba never received one of those fancy live-action stage plays, but Kayano went on to describe the level of camaraderie the cast and staff have with each other, and how that’s really important in maintaining the series’ charm and quality. Finally, Aki Toyosaki threw in あどりぶ, which literally means “ad-lib” in English. All that shouting that Kazuma does? That insane chanting of ridiculous magical spells by Megumin? Much of that stuff isn’t even in the actual script, and it’s part of the series’ allure with the audience and why it’s so fun to work on.

The MC posed a really interesting question to the cast next: what exactly are the factors that contribute to a movie being a true hit at the box office and beyond? Rie Takahashi chimes in first, saying that a hit movie requires a movie theater. Kazuma basically agreed with her, adding that it needed to be a story that fans love.

Shortly after though, the MC came right out and said that it really depends on the bond shared by the cast and their ability to work smoothly as a team. So what better time to present a brand-new game show that I’m sure will only continue to rise in popularity with a worldwide audience. ‘SUBANAIRE’ takes quite the inspiration from another long-running game show with a name that rhymes due only to the liberties taken with our new game’s title. The cast even get lifelines! If they can answer most of the questions correctly through consulting with each other, then the movie would surely be a hit. And if not, well… who knows really?

First SUBANAIRE question — with whom was Kazuma speaking to when he first employed the iconic “hai, Kazuma”? This one wasn’t too hard to recall, and the party gave a correct answer right off the bat. The remaining two questions really spiked in difficulty and in the minutiae factor, so they ended up using some of their lifelines. Unfortunately, neither the 50/50 or even the audience vote offered them a correct answer, leading to two failures and an ultimate score of ⅓. What followed, however, was the trailer itself, and I’m confident based on this that there won’t be any problem whatsoever in this thing’s ability to become a hit.

Since the movie focuses on Megumin’s quest to return to her hometown and the antics of her arch-rival Yunyun, both Takahashi and Toyosaki offered their comments. Megumin’s voice let everyone know that she could actually feel the explosiveness of the movie, and urged everyone to give it a watch to appreciate that feeling. Yunyun, while remaining the butt of many a joke, will actually go on the adventure this time instead of lurking in the background, so Toyosaki thinks everyone deserves a closer look at the character and her relevance to the larger plot of Konosuba. As for the rest of the cast and parting messages, Ai Kayano mentioned that she always loves to see everyone’s smiles at Konosuba events, and hopes that we can all continue to do so while seeing the movie. Jun Fukushima assured everyone that the same zany humor and tendency of the cast to ad-lib their lines were still there, and also added that you can really see and appreciate through the details in the movie and animation as to how this would be the most love-packed work in the Konosuba series to date.

As far as a voice actor and talk events go, this one was an absolute joy to witness. The sheer zaniness of a Millionaire parody in the context of promoting and isekai fantasy anime wasn’t the only thing that left me with a huge smile on my face, but also that reassurance that my favorite comedy series of all time continues to deliver and that to staff and cast involved in the production really does just love what they do.

Dr. STONE Cast Share Their Thoughts and Feelings on the Upcoming Anime at AnimeJapan 2019

Neon Genesis Evangelion to Begin Streaming on Netflix on June 21