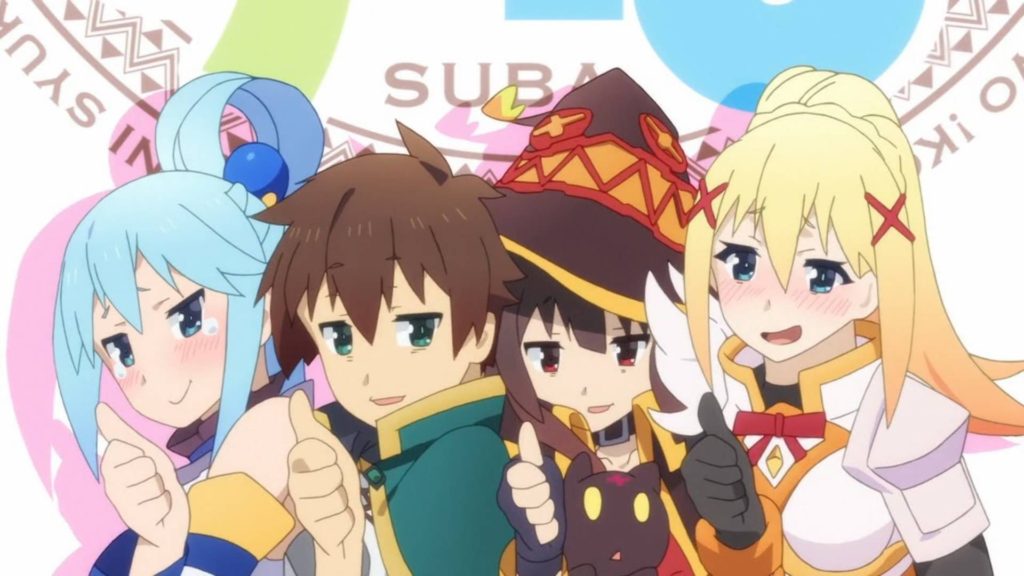 After witnessing the explosive popularity of KonoSuba: God’s Blessing on this Wonderful World both at home here in Japan and abroad, I knew that it wasn’t by any stretch of the imagination that a new season, movie — something — would be announced for the beloved franchise. Even still knowing all this, when I received this new earlier today, I admittedly exploded into tears of joy.

KonoSuba is back in a brand-new animated project, though it is unclear at this moment if that means a season 3, an OVA, or even a movie. Appearing during the 28th episode of KonoSuba Radio on Japan’s HiBiKi anime-centric online radio station, voice actor for Kazuma Jun Fukushima and voice actress for Megumin Rie Takahashi joined forces to make the surprise announcement. (If you decide to give it a listen, you’ll see that I’m not the only one who exploded into tears after hearing the announcement. How fitting!) Shortly thereafter, the news was further confirmed by the below Tweet from the official KonoSuba account.

Planning has begun on a new anime project! It was announced on the radio, but thanks to the support of you, all the fans, the new project is underway! Thank you so, so much! Look forward to hearing more soon, and to the day we’ll meet the KonoSuba characters again! God’s blessing on these wonderful fans!

I can positively feel the graciousness radiating from that tweet. And isn’t that illustration wonderful? It was provided by artist Mishima Kurone, the character designer of the original light novels.

The celebrations came out in full force, as Takahashi uploaded this photo of herself and Fukushima shortly after the broadcast as well.

I need to get my hands on his shirt.

If you haven’t given the series a try yet, the anime is a perfect way to start. Rarely have I seen a slapstick comedy that is so on the mark with its timing, as well as taking full advantage of the quirky personalities of its main characters. Yen Press are also currently releasing the light novels in North America, and you can find their official synopsis below.

Game loving shut-in Kazuma Sato’s life as a young schoolboy in Japan abruptly comes to an early end…or at least it was supposed to. When he opens his eyes, though, he sees a beautiful goddess that offers him a once in an after-lifetime chance to be reborn in a parallel world. The catch is that the world is violent and threatened by a growing evil! Fortunately, he can choose any one thing to bring with him. So he chooses the goddess, Aqua! And so his adventure with his gorgeous companion begins–if he could just get enough money and food to survive, keep his goddess out of trouble, and avoid grabbing the attention of the Demon King’s army!

If you are a fan of both fantasy RPGs and anime, then you owe it to yourself to give this parody, which never, ever takes itself very seriously, a try.

Combatants Will Be Dispatched! Episode 1 Review

KonoSuba Perfume Lets You Smell Like a Useless Goddess