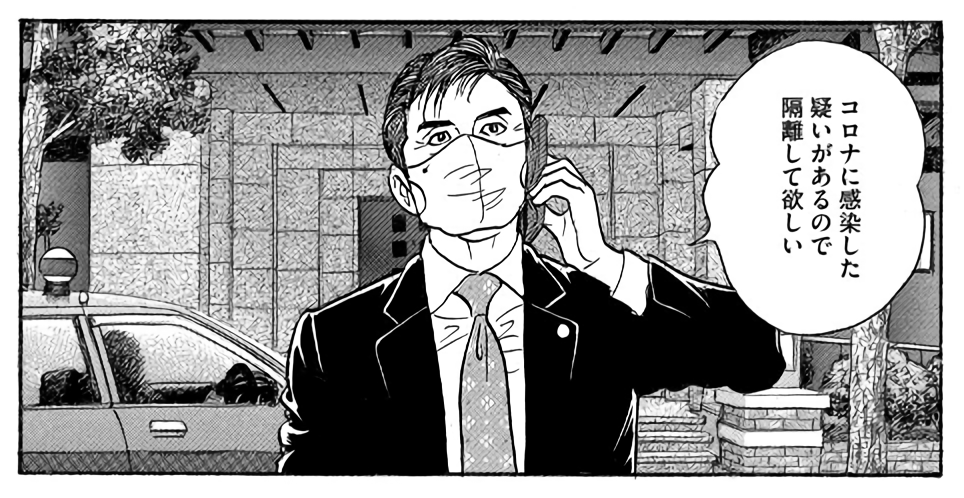 Across nearly forty years of constant publication, Hirogane Kenshi has never been afraid to incorporate real world elements into his long-running Weekly Morning series, but the latest storyline in the character’s latest incarnation – Consultant Kosaku Shima – has people worried.

In chapter 36, published in last week’s issue no. 13, Kosaku Shima found out that one of his business partners in Korea had passed away from COVID-19, and that one of his former colleagues from the fictional company Hatsubashi Electric had contracted the virus. Given that they recently went out for dinner together, Shima began to suspect that the worst. That was confirmed later on when he tucked into a curry, but quickly discovered that he couldn’t taste anything.

In the latest chapter 37 of Consultant Kosaku Shima, the character finds himself confined to a hotel room after getting a positive result from a PCR COVID-19 test. The chapter then goes through slowly and methodically his quarantine process, including the fact that he can’t go outside or eat anything but pre-packaged bentos for two weeks. Although there’s nothing physically wrong with him outside of the lack of taste, readers couldn’t help but be worried.

Media personality Shoko Nakagawa tweeted out on 25 February that she was worried about him. ’I hope that he recovers with no side effects,’ she said, also praising author Kenshi’s ability to always ‘read the signs of the times and depict them’ in his manga. The chapter’s straightforward depiction of quarantine life was also praised by Twitter user @kyouji0716, saying ‘you could use it in a pamphlet as is.’

It’ll be interesting indeed to see if Consultant Kosaku Shima’s latest storyline does any good in terms of raising awareness about COVID-19, especially given that it has a slightly older readership. COVID denial exists in Japan as it does everywhere.

Furthermore, while it’s unlikely that Kosaku Shima will pass away from COVID-19, that sure would be one hell of a way to end the series after nearly forty years! He’s 73, so he’s in a particularly at-risk age group. Get well soon, Shima-san!