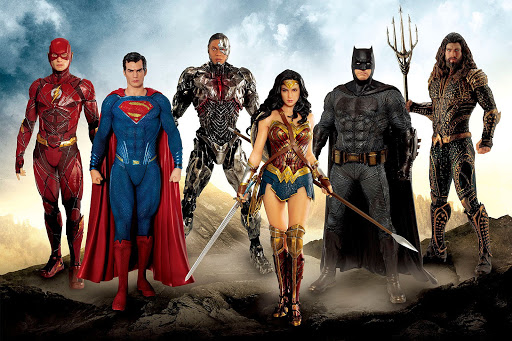 The most casual fan might not know how much work, thought, and skill can go into an “action figure.” That fan wouldn’t know about Kotobukiya. From their humble beginnings in post-WWII Japan to being a massive force in the pop culture toy industry, the quality of their work is their single most defining feature as a brand.

The particularly cool thing about Kotobukiya is that, not only do they do great work, but they do a lot of it. Showcasing characters from anime, video games, and Western franchises, they have several lines of figures and manage to do a great job with them all. Here we’re going to explore what Kotobukiya is most famous for, what their story is, and what they’ve got coming up.

Kotobukiya was first founded in 1947 as a single toy store primarily selling dolls. In fact, they didn’t even start to venture into original model kit manufacturing until 1983 with their Armament kit. Their first license was for a King Godzilla kit in 1985.

The big break for Kotobukiya as a model kit manufacturer was when they got the license for the Mobile Suit Zeta Gundam THE-O mecha model kit, marking the first time any company other than Bandai was able to release Gundam products.

In May 1989, Kotobukiya started to release toys that weren’t model kits with their soft vinyl statues and Active Styling Figures, now known as ARTFX Statues. They have since expanded into fully painted and assembled resin statues, action figures, one coin mini-figures, and more.

Kotobukiya is known for their quality and dedication to craftsmanship. To that end, they hold annual sculpting and painting contests, moderated by their in-house artists, outside sculptors, and other judges like the editor-in-chief of Hobby Japan.

Kotobukiya Kreative 3 (or K3) was founded in the USA in October 2009 to help facilitate Kotobukiya’s expansion into the US market through marketing and product development.

Now, Kotobukiya is famous for their Bishoujo statues, ARTFX statues, Fine Art series, licenses for a wide array of properties including American ones like Marvel and DC comics and Star Wars, and doing it all at a high level of artistic quality that competes with the best in the industry.

It’s difficult to write about Kotobukiya without discussing the “tongue in cheek” line of Bishoujo (or “pretty girl”) Statues. The Bishoujo statues are figures depicting characters from all kinds of media, but all as pretty girls, often in alluring poses.

Characters that are already attractive women, like Wonder Woman, tend to stay pretty faithful to the source material. However, characters that are anything else get adapted into a “pretty girl” body. That means that characters who are traditionally male get transformed to a gender-bent version of themselves, like this statue of Deadpool.

The designs for the Bishoujo versions of these characters are based off of Shunya Yamashita’s illustrations of various characters in the same style, and are made at a 1/7 scale.

There’s a subsection of figures from Kotobukiya that is particularly famous among horror movie fans – there are Bishoujo statues available depicting antagonists from famous films in the genre.

The line started in 2014 with Freddy Krueger and Jason Voorhees as they were depicted in Freddy vs. Jason, and received positive reviews from fans. Even though the ugly nature of these men is altered physically into beautiful women, Kotobukiya still does a good job keeping enough details in the figure to make it feel authentic to each individual character.

The horror figures are popular enough to warrant another two coming out this year. In July, Beetlejuice from the movie of the same name will be released, and November will see the statue of Pennywise from the 2017 adaptation of Stephen King’s It. 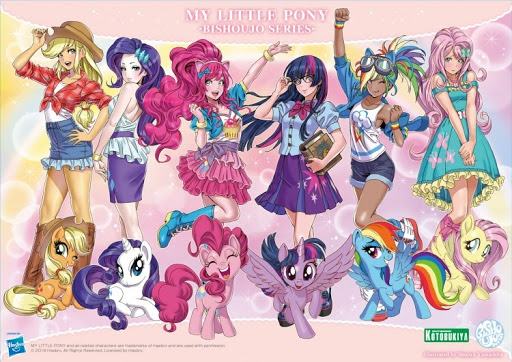 Kotobukiya and My Little Pony

Taking the Bishoujo line one step further is Kotobukiya’s line of My Little Pony dolls, which feature the “Mane 6” characters of the series fully anthropomorphized from animated ponies to beautiful adult human women.

The series of statues began relatively recently with Pinkie Pie in June 2019, and they’re currently only halfway through the lead characters. Rarity, Rainbow Dash, and Applejack are all slated to come out later this year.

Luckily for My Little Pony fans, Kotobukiya isn’t limiting their offerings to the “Mane 6,” and plans to release Sunset Shimmer, and almost certainly other members of the supporting cast, soon.

Many of the models Kotobukiya has coming out in 2020 come from Star Wars, like Rey, Kylo Ren, Darth Vader, and an A New Hope version of a Stormtrooper, but they also have offerings from franchises as diverse as Marvel and DC comics and horror films, among others.

In addition to their high quality design, sculpting, and painting, ARTFX statues are also designed to have dynamic poses. Kotobukiya hopes to use them to “impress the world” with their new ideas.

Alongside the ARTFX line runs ARTFX+, a series of statues that do roughly the same things as the main ARTFX ones, but they’re cheaper, smaller, and have a few exchangeable parts, hence the plus.

Kotobukiya as a company is known for how consistently they strive for quality in their work. But if you want literally the best of the best, you have to go for figures in their Fine Art series.

Fine Art models are made with cold cast resin and then hand painted by artisans. The extra work gives them an unmatchable level of detail, and a unique texture. They come with a price tag to match – the statue of Thanos coming out later this month sells for a hefty $480. But for the fan who can afford it, you get what you pay for with the personal attention devoted to each one.

Fans buying pop culture merchandise often have to make a choice between quality or quantity. It’s clear which side of that spectrum Kotobukiya chooses. They’re certainly not designed for kids or the most casual of fans, but if you’re looking for a model that can satisfy in every way, you’ll certainly find it in the incredible work done by Kotobukiya.