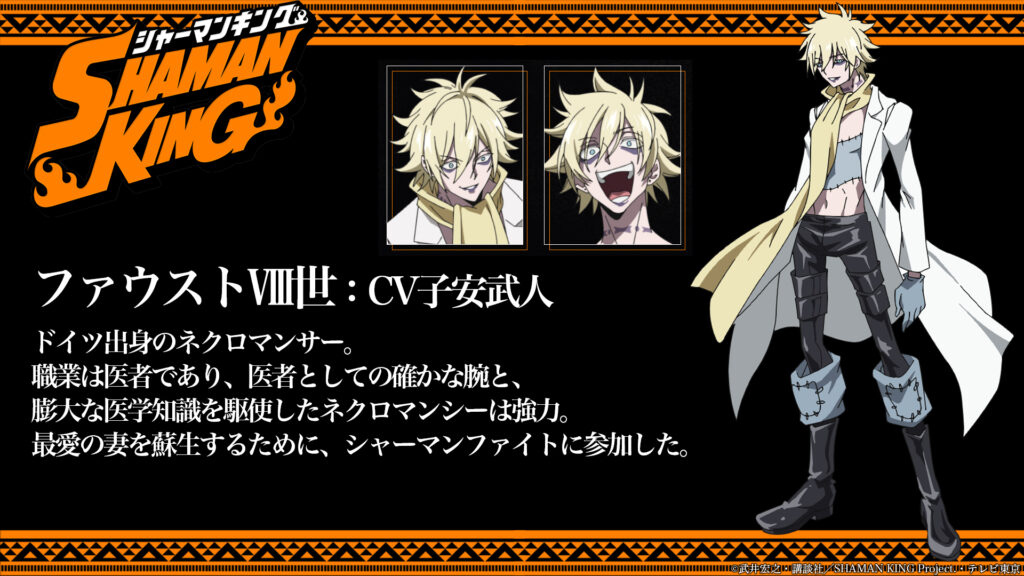 When the new Shaman King remake arrives in April, several members of the original cast from the incomplete 2001 anime series will also return. As of Wednesday, we now know that Takehito Koyasu will be among the returning voice actors as Faust VIII.

Koyasu returns to play Johann Faust VIII, descendant of Doctor Faustus. Much like Dr. Frederick ‘Frahn-ken-steen,’ Faust VIII initially stays away from his infamous ancestor’s legacy. Unfortunately, his wife dies, which pushes him into necromancy, and the goal of becoming the Shaman King. Initially a rival, he joins Yoh as a member of Team Funbari Onsen.

The website for the new Shaman King series has a couple of comments from Koyasu, in a Q&A format.

Asked about what appeals about the series, he answers: ‘The world view, the story, the characters, and your love.’

The second question was ‘Could you tell us your enthusiasm for playing the character Faust VIII?’

‘Even if I am reborn, I am very happy to love Eliza again. I will do my best for Faust. Thank you for your support,’ he says.

Since the 2001 version of Shaman King ended, Koyasu has had quite a few roles, including Kululu in Sgt. Frog, the titular character of Bobobo-bo Bo-bobo, Excalibur in Soul Eater, Roswaal in Re:Zero, and Dio in JoJo’s Bizarre Adventure.