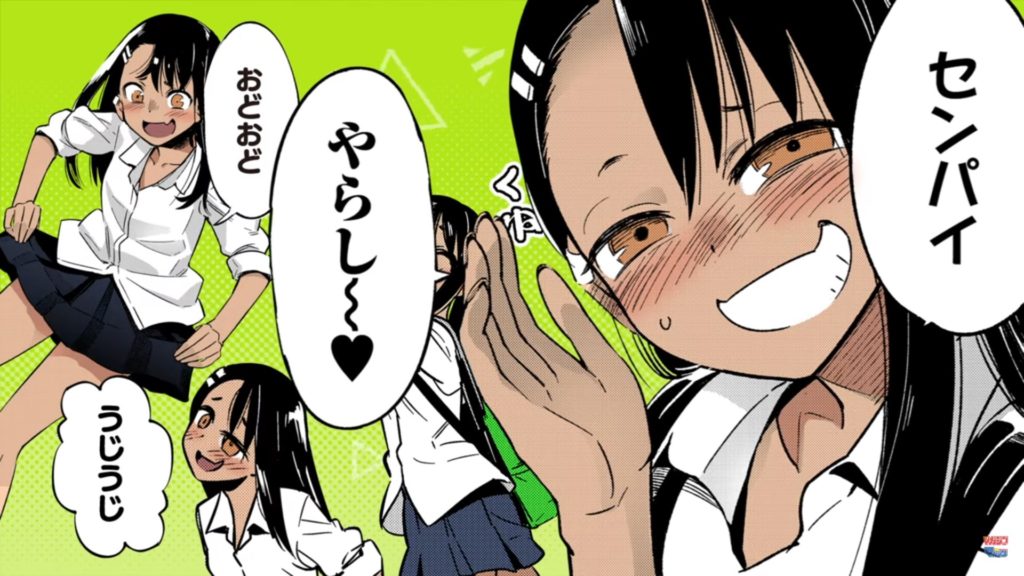 It’s been quite a while since I last wrote about Don’t Bully Me, Nagatoro-san. I’ve been following the series ever since it blew up last year, and among online manga communities such as the r/manga subreddit, it has proven to be a firm favorite. Given that, there was considerable excitement when a new commercial for the series emerged last Thursday with the titular Nagatoro speaking for the first time. Check it out below:

The new Nagatoro-san commercial is meant to promote the series’ ongoing publication in the online magazine Shonen Magazine Pocket, as well as the release of the series’ collected tankobon volumes, of which the fourth just released on February 8. As the title reads, it’s meant for new readers, yet long-time fans were also very excited about the commercial, as it sees Nagatoro speaking for the first time.

Lending her voice to Nagatoro for the new commercial is none other than Kurosawa Tomoyo. She’s been around as a seiyuu for a while now, having voiced such characters as Hibike! Euphonium’s Kumiko Omae and Land of the Lustrous’ Phosphophyllite, as well as voicing and performing as The [email protected] Cinderella Girls character Miria Akagi. Needless to say, Kurosawa doesn’t tend to voice characters as sadistic as Nagatoro, so her casting came as a bit of a surprise.

That being said, I’m not wholly convinced of her performance as Nagatoro. Perhaps that’s just because it sounds different from what I imagined Nagatoro to sound like in my head, which is an almost impossible hurdle for even the most talented of seiyuus to clear. But I always imagined her to have a bit of a lower voice, with her cackles being a bit more shrill than Tomoyo’s in the commercial.

That being said, we probably don’t have to worry about that for a while though. Only four volumes of the series have been released so far – probably not enough material to embark on an adaptation with. In the meantime though, Nagatoro-san is available via Shonen Magazine Pocket.