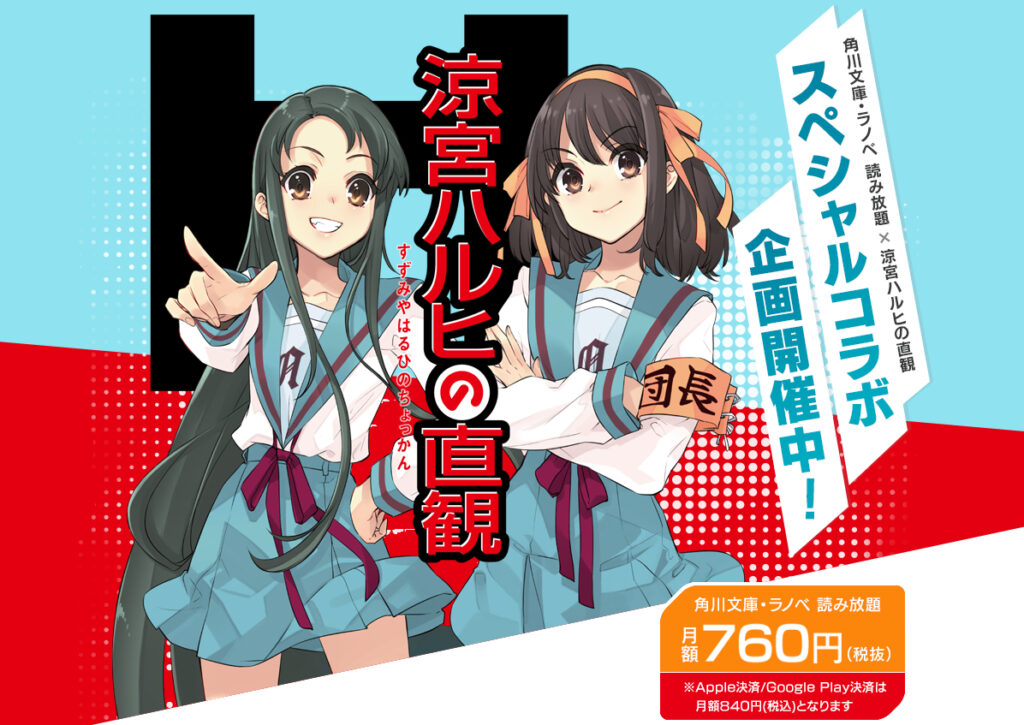 Members of Kadokawa’s BookWalker will get a couple of special treats this month.

With a new Haruhi Suzumiya light novel coming out at the end of November, “all-you-can-read” members of the online book service will get unlimited access to all 12 novels in the Haruhi series from now through Dec. 31. (Naturally, that will include the new one when it arrives.)

Kyon Tells You About It

In addition, through Nov. 30, Kyon himself will read a synopsis for The Melancholy of Haruhi Suzumiya in BookWalker’s text-to-speech version.

(That is, Tomokazu Sugita will do the reading in Kyon’s voice. Since I haven’t heard the recording yet, I can only imagine that it will be quite snarky.)

Of course, there is a catch. According to Kadokawa, this extra little bit of Kyon narration will only be available at BookWalker. Also, you have to be a Kadokawa Bunko/ Light Novel Unlimited Reading member.

Kadokawa is also currently accepting reservations for the digital edition of the new novel.

The new novel, titled The Intuition of Haruhi Suzumiya, is expected to come out on Nov. 25. Incidentally, the official Haruhi Twitter account has been doing a cute daily countdown featuring SOS Brigade members:

The Twitter message also serves as a de facto countdown for Yen Press’ English-language digital version, which will come out the same day. However, you’ll have to wait until next year if you want to purchase a paperback print copy in English.

According to reports, the new novel will include previously published short stories Random Numbers and Seven Wonders Overtime.  It will also contain a brand new story, Tsuruya-san’s Challenge.

I’ve seen Seven Wonders Overtime. It’s a fun story which fits the style of past (or future?) Haruhi anime episodes. The rest of the new book will hopefully be worth the nine-year wait.