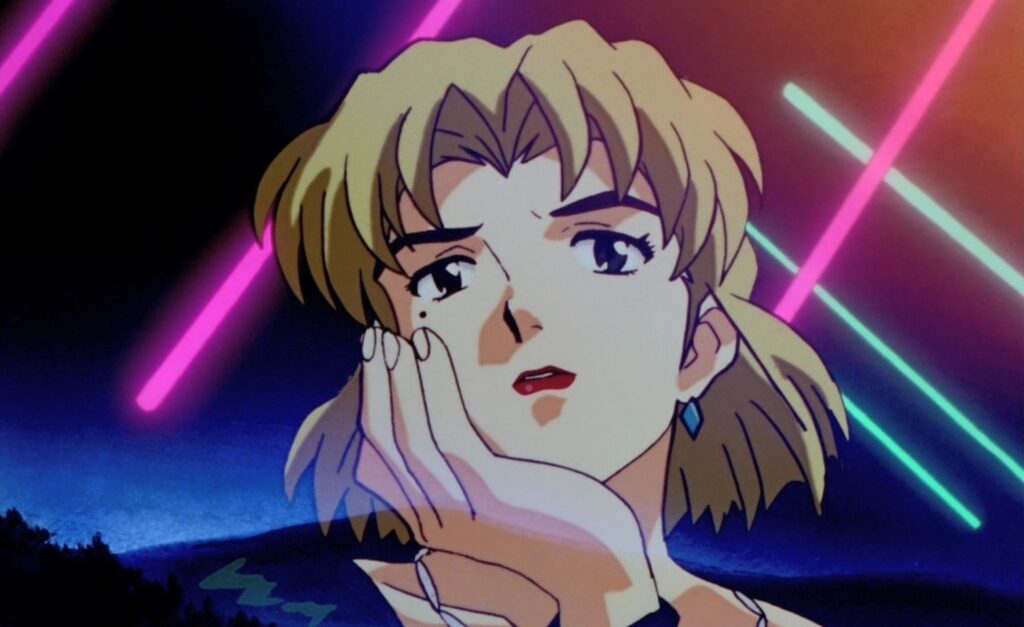 One of the biggest points of debate among the anime liking public at large, raging for 25 years and showing no signs of slowing down, remains the discourse around who is the best Neon Genesis Evangelion character. When the show first came out in 1995, the often silent and expressionless reigned supreme on Japanese character popularity lists for years. However, now that Neon Genesis Evangelion has amassed a well deserved and huge international cult following, anime’s most furious firebrand Asuka Langley Soryu and professional nice boy Kaworu Nagisa have given Ayanami a run for her money, even back in Japan. Many millennials find themselves empathizing with Misato Katsuragi, the perfect woman, as they approach their 30s and beyond and have come to appreciate the weak willed Shinji for his shortcomings instead of just calling him a variety of boring homophobic and misogynistic slurs. One Tokyo 3 denizen no one ever seems to go to bat for is the exhausted doctor, Ritsuko Akagi, one of the few reasons she might actually be the most pitiable in the entire show.

Spoilers ahead, of course.

Famed sadness wizard Hideaki Anno provides Neon Genesis Evangelion a few answers to the question of ‘Who exactly is Ritsuko Akagi’ that we’d like to reestablish before talking about exactly why the Doctor is so uniquely tragic in a show overloaded with tragic figures.

To start with, Ritsuko’s the offspring of the lake Naoko Akagi, creator of the incredibly complex Magi computer system, essential to operations at Nerv and running the Evas. She’s the only remaining person in the world who can operate said system, making her quite essential to Nerv and the future of humanity. Despite that, she’ll forever be stuck in her mother’s shadow. At least, she can call her college-buddies-turned-coworkers Misato Katsuragi and Ryoji Kaji her friends, though they both seem to have more in the way of charisma and a sex life than she ever did. Finally, despite her often cold and sardonic exterior, it seems she’s a person who ended up catching feelings for exactly the worst person left on earth.

Right off the bat, Dr. Ritsuko Akagi wasn’t given the best odds, and we’re not just talking about having to live in the post second impact world. When she was a mere high school student, her insanely brilliant mother offed herself in the middle of the workday because some brat called her ugly. Well, to clarify, she killed the brat before flinging herself off some headquarters alcove that really should have been fenced, if not windowed up. Before this, though, the former Dr. Akagi explained to Ritsuko that her Magi system reflected all three aspects of herself; Dr. Akagi the Scientist, ‘Mom’ the mother, and Naoko Akagi the woman. One could extrapolate this as Anno meaning to convey that all people have their own versions of these three inner facets to themselves always at war with one another. Much as she tried, Ritsuko the scientist could never quite supersede Ritsuko the daughter stuck in her own mother’s image, much less ever finding stability as Ritsuko Akagi the individual.

By the time we get to the start of Neon Genesis Evangelion, Ritsuko finds herself in a less than ideal situation. Quite literally being the only person on the planet that can do what she does, she’s constantly burdened by the weight of her responsibilities as the Magi’s character. Maybe she wouldn’t have been the type anyway but, unlike our collective Mom Misato Katsuragi, who’s the same age as the Doctor, the younger Akagi simply can’t goof off and drink the nights away. Granted, her importance to Nerv allowed her to climb organization ranks very quickly, ending up somewhere in the vicinity of Gendo’s inner circle. While that’s a boon if we specifically are looking at Akagi’s career trajectory, she’s ultimately not the genius scientist her mother was. What she does unfortunately share in common with her late mother is a desire to be needed by the absolute worse person on the planet; Ritsuko doesn’t ultimately just make the same mistakes as her mother, she also makes them because of one Gendo Ikari.

Like Mother like Daughter we guess, as what Hideaki Anno might intimate as one possible conception of ‘pride’ is what did them both in. They both slaved away in computer hell for Gendo, they both slept with Gendo, and were both ultimately revealed as disposable to anime’s top bastard. In fact, he straight kills Ritsuko, denying her the opportunity to become orange goop. While Shinji, Misato, and the rest of the cast are pitiable for myriad reasons, at least they got to eventually experience a little happiness along the way. Shinji made some real friends, Rei discovers she does indeed have agency, but Ritsuko never got any awards for all that she sacrificed. Then again, by choosing to become a person who knew the secrets held back from Misato and the child-pilots, knowingly advancing Gendo’s agenda, she bears some of the responsibility. Yet, he still saw nothing but Yui Ikari. Perhaps that’s what drove the Doctor to tragically commit a clone genocide at the very end.

Yet, there’s hope for Dr. Ritsuko Akagi! The ultimate genius of the Rebuild of Evangelion movies is that they allowed the cast of Evangelion to grow as people when they didn’t originally. Shinji finally listens to track 27 of his cassette player, Asuka learns how to apologize, and hell, even Gendo considers spending personal time with his son before an Angel attack ruins everything. Ritsuko makes it to Evangelion 3.33, the first of the films that ventured into completely new territory, and not only is she sporting a cute new pixie cut, she’s siding with Misato against Gendo. She doesn’t get too much exposition in movie 3, but we can infer she made some different choices along the way. She’s all too sad a figure in Neon Genesis Evangelion, even if that’s partially her own doing. Here’s hoping she finds closure in the soon to be released movie 4.