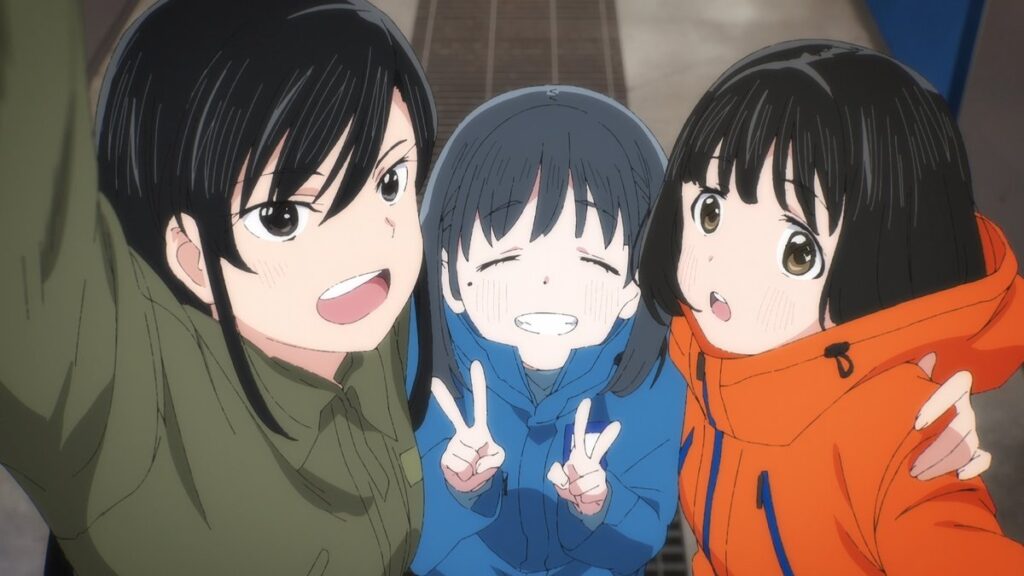 In a Spring 2021 anime season loaded with great anime, memorable characters, and interesting developments, one show that flew gently under the radar is Super Cub. It’s based on a 2017 light novel series that’s currently running with eight volumes and is animated by Studio Kai. Although the relatively new anime studio has faced some financial challenges in 2020, they’ve delivered a subtle, standout hit from the season in my opinion.

Super Cub is best described as a quiet iyashikei series that focuses on the healing of the main character, Koguma, as she learns to ride and maintain her Honda Super Cub. It’s a boring slice-of-life anime that shows how true friendships can be made by bonding over a similar hobby. In this case, it’s Koguma’s personal journey of growth, love, and friendship with classmates Reiko and Shii Eniwa in a small town. It’s this unassuming nature that makes the story interesting and the characters so intriguing. 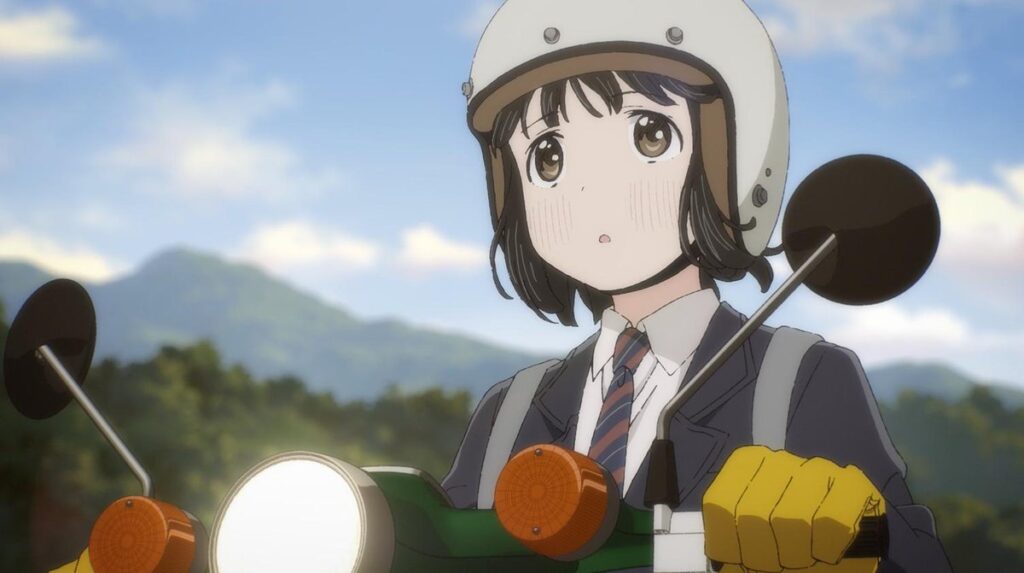 Sometimes, an anime where nothing happens is a good thing because we need an occasional breather from conflict. Iyashikei series like Super Cub excel at portraying grounded characters living their everyday lives in a mostly rural, calming environment. That’s not to say there’s no inherent conflict Koguma faces head on, but there’s a raw honesty presented I really appreciate. The subtle storytelling of Super Cub first introduces us to Koguma as a loner with no friends or parents who raised her. Living alone, her bleak life is depicted as a gray world, with quiet music and loops of public domain classical pieces to further cement a depressing vibe.

Soon after purchasing a Super Cub motorbike, Koguma’s world gradually gains more color as she travels with new best friend, Reiko, across peaceful forests and rivers and learning to make her own adventure in her life. This demonstrates a strong sign of personal growth and self realization on her part, with Koguma realizing she isn’t alone anymore. It was all thanks to the motorbike that kickstarted this all. 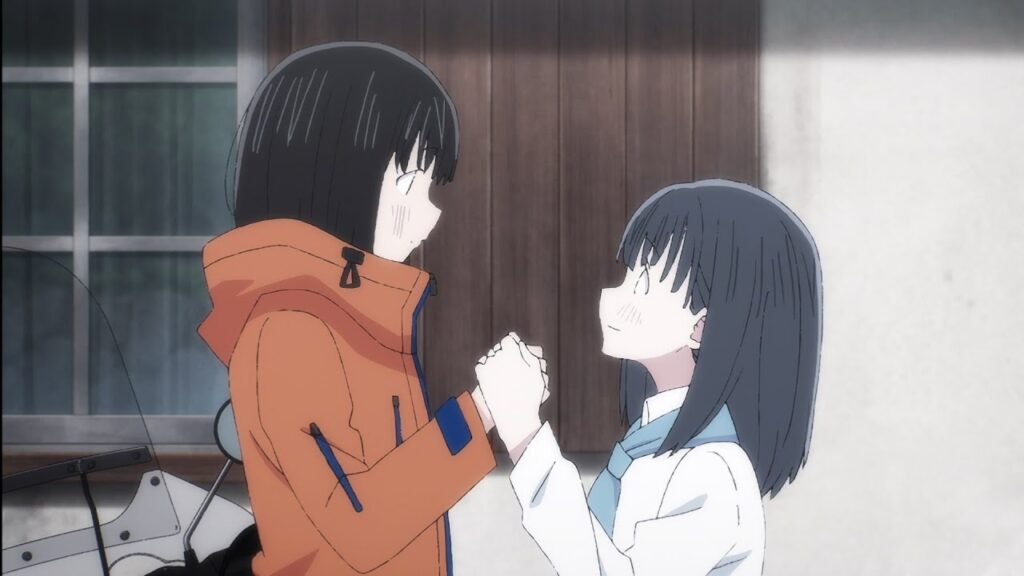 Now while Super Cub may sound like a blatant advertising campaign meant to persuade you to buy one for yourself, I’m going to take a less cynical perspective. Sure, there are some product placements, but they don’t distract from what really matters to the story: a personal slice-of-life narrative. In the beginning of the series, Koguma was just drifting through her school life, wondering how alone she’ll be without a sense of purpose of self worth. It was her taking a chance on buying the Super Cub that inspired her to go out of her way to explore and take in the experience of traveling to and from places. In the end, Super Cub stresses the importance of enjoying the journey with people you appreciate rather than reaching the destination. 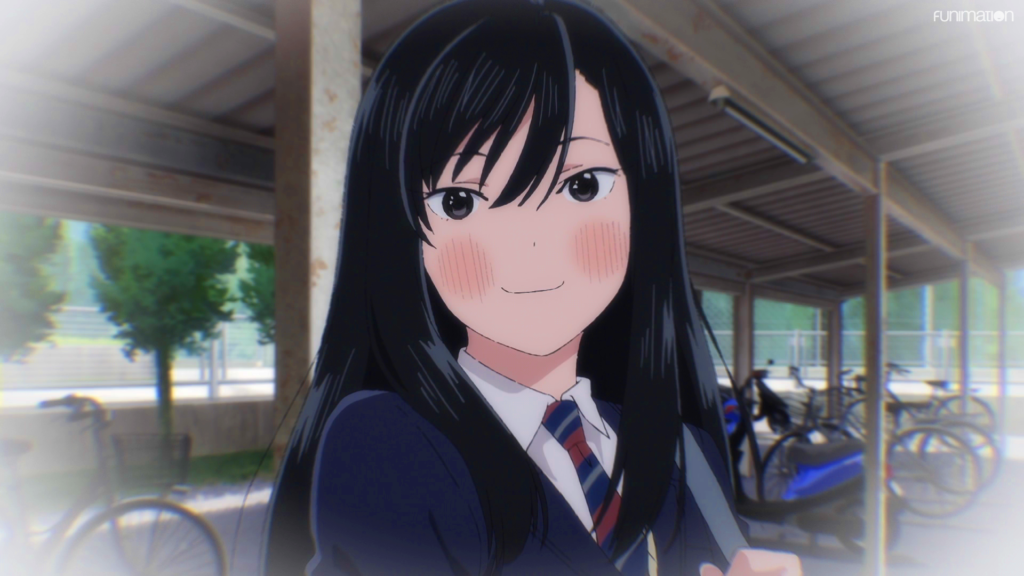 While the anime focuses primarily on Koguma, her friend Reiko also gets an episode for herself, focusing on why she loves her MD90 motorbike and her goal of conquering a rocky slope of Mount Fuji. Super Cub takes its time to explore the motivations of its characters and Reiko shows us her determination to achieve her goal, no matter how much scrapes and bruises she incurs. Her episode is where the anime gets exciting, incorporating rock music to drive up the intensity. It’s a strong tonal change from what the series is so far, but I think it’s reflective of the highlighted character. In this case, Reiko’s headstrong personality depicts a harsh, but colorful world while Koguma’s quiet, reserved nature portrays the world as silent and gray.

The plot eventually includes Reiko and Koguma’s classmate, Shii, who takes an interest in their motorbikes after helping her out with the school festival. She’s an important character to the story because of her neutral outlook and curiosity towards Reiko and Koguma’s motorbike hobby. Her parents run an Americanized cafe which they frequent, building up the close knit relationship they’ll all have towards the finale. 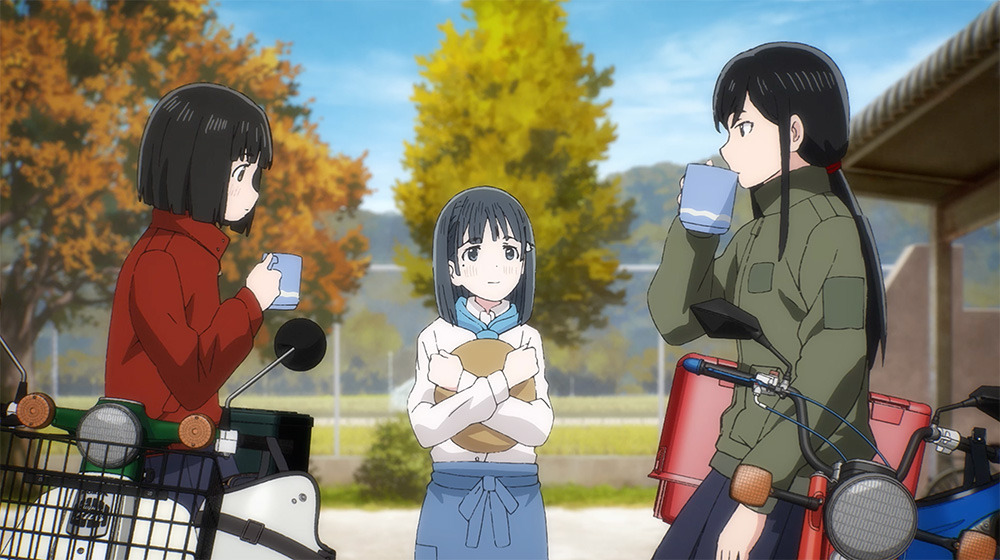 Like Koguma at the start of the anime, Shii rides around town with a simple bike to get around. She’s sort of like Koguma before she bought the Super Cub and greatly admires both her and Reiko’s motorbikes. Unfortunately, Shii accidentally falls into a ditch and destroys her bike. She calls Koguma for help and is brought back to her home to get a warm bath and meal. It’s a hard experience for Shii because she just wanted to experience that sense of adventure riding on the road, but it didn’t end the way she thought it would.

The meal and bath Shii takes with her friends leads to a nice bonding moment between them. They learn more about motorbikes and each other, as Koguma and Reiko comfort a crying Shii on her loss. Eventually, they all laugh it off and convince Shii to buy her own Little Cub motorbike to ride along with them. Her journey greatly reflects Koguma’s own because she was in a similar position as Shii. Her influence in inspiring to ride with them brings the narrative full circle and demonstrates her maturity and growth from the first episode onwards. 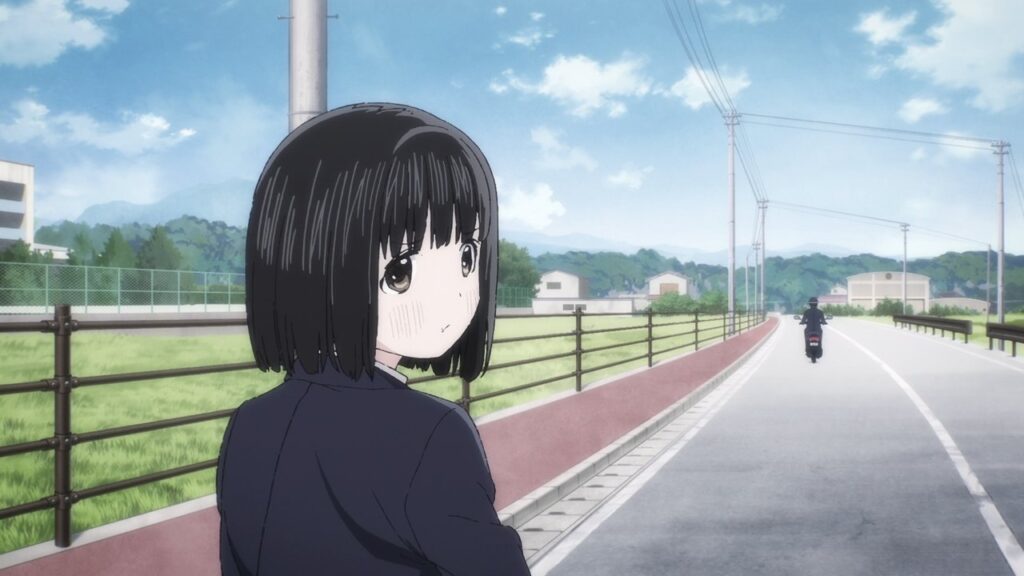 Super Cub may not be an anime for everyone, but it’s a good recommendation for fans of Yuru Camp. Whether you can’t make it past the first episode or you dropped it halfway, it’s a series with an acquired taste based on a niche activity. Despite this, it’s a great example of the charm of iyashikei anime that uses simple, slice-of-life stories to craft a connective, character driven show. For those who stuck around after finishing it, you’ll find it’s a very rewarding and relaxing experience.