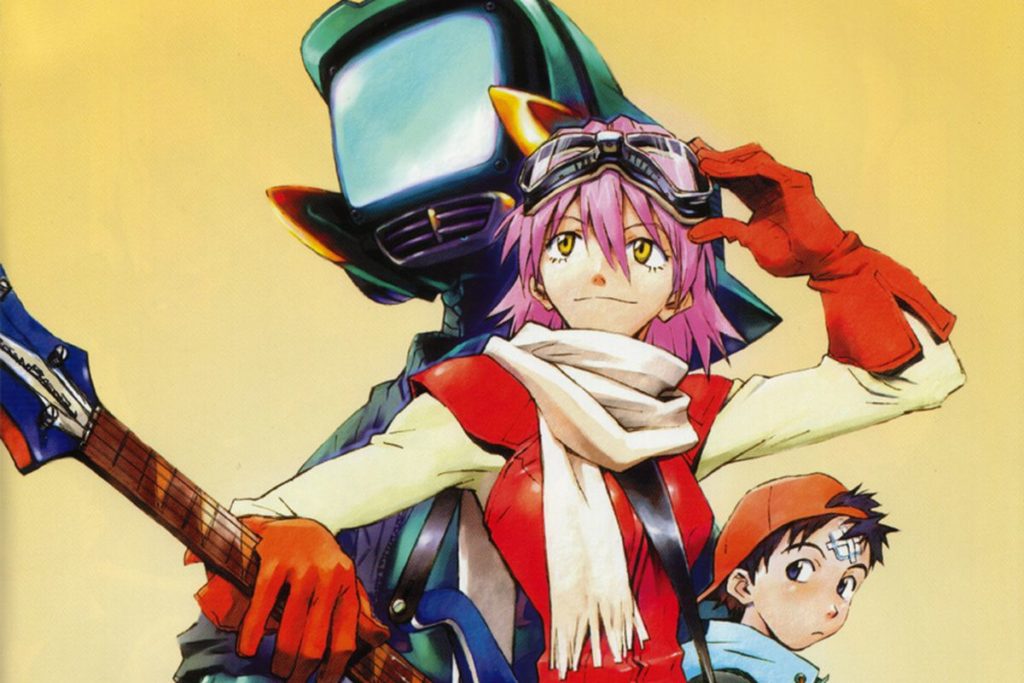 Without a doubt the most famous OVA of them all at least when talking about western anime fandom. Little FLCL has come a long, long way from the days when Gainax and Production I.G. were releasing one episode at a time of the six-episode story from April 2000 to March 2001. Director Kazuya Tsurumaki, who would go on to co-direct the Rebuild Of Evangelion films, couldn’t have dreamed how much foreign audience would embrace his weird little show.

Whether you call it FLCL, Fooly Cooly, or Furi Kuri,  the early 2000s OVA with its many names has certainly made an impact in your life as an anime fan. The perfect blend between the type of Japanese wackiness that made anime so distinct from American cartoons when it was first becoming significantly popular outside Japan and the real emotions that are integral to any coming of age story, FLCL showcased the full breadth of what anime could be.

It was one of the shows that during the Toonami Era brought dragged fans deeper than the Pokemon or Dragon Ball Z level of anime.

How FLCL Took The Anime World By Storm

There are two ways to briefly explain how FLCL gained such a long-lasting and widespread fandom in the United States for being a six-episode show that came out at the turn of the Millenium.

The first would be that it’s a peak Gainax show, arguably only second to Neon Genesis Evangelion, and that means it’s filled to the brim with Cool Japan weirdness no other studio could replicate and heaps of emotional resonance as a coming of age tale.

Why so many people knew about FLCL however was because Adult Swim aired and reaired and re-re-aired those fateful 6 episodes god knows how many times over the years.

FLCL would remain so popular overseas for so long that eventually, Adult Swim themselves would sponsor the creation of more FLCL. This time with the aid of Production I.G. who co-produced the original with Gainax. Did these new unexpected and warmly welcomed seasons of FLCL add to the definitive legacy of this great show?

FLCL Season 2, or FLCL Progressive, made waves when it was first announced. We got a cool looking girl with cat ear headphones, we got some tough lady in a neat visor, and we got the return of Haruko.  Fans thought the second, and third, coming of FLCL was going to be a great victory in the anime world especially since The Pillows had also signed on once again.

Unfortunately FLCL Progressive didn’t fare too well, and lots of people dropped it after the first few episodes. Centering around the introverted Hidomi, FLCL Progressive tried to tread all the territory the original OVA did without the subtlety or nuance that made it such a hit in the first place.

Maybe Progressive is still technically a more competent and interesting and show than a lot of other recent anime, but most fans agree it didn’t live up to its predecessor.

Conceptually FLCL Alternative was a more interesting project than Progressive. Each episode of the 6 episode FLCL Season 3 was directed by a different young animator, bringing their own touches to each episode. While Haruko was still present in the show, it centers much less around her backstory than season 2 allowing the Alternative’s cast and story to shine.

There’s a reason why Fooly Cooly has stuck with us for all these years. It’s robustly distinct cast, each character chock-full with their individual flaws and problems, has always kept us coming back time and again. Depending on where you are in life, you may find yourself empathizing with someone new each time you rewatch FLCL.

Haruko Haruhara aka Haruhara Haruko aka Haruha Raharu is the big maker and shaker in the world of FLCL. Her continual chase for the Pirate King Atomsk has lead her to earth and then more specifically into the life of Naota Nandaba and those around him. She’s extremely loud, rather inconsiderate, and genuinely isn’t scared to break one taboo after another but despite being problematic on paper neither Naota nor the audience can help but fall in love with her.

Accompanied by her signature yellow 1965 Vespa SuperSport 180 and her 974 left-handed Azureglo Rickenbacker 4001c64 electric bass guitar she’s one of the most iconic anime characters of the early 2000s.

With the existence of FLCL Progressive and FLCL Alternative, we guess Haruko Haruhara has retroactively become the overall main character in FLCL. In each show she still plays an advisory role as opposed to being the protagonist but, especially in FLCL Progressive, the two newer seasons go a long way into establishing more of her backstory and explaining what exactly is the deal with her and Atomsk.

Unfortunately what we aren’t sure is if Haruhara Haruko was made a better character by this additional information, or if we preferred with the mystery intact.

Naota’s a kid with a lot on his mind, and a lot literally coming out of mind too. Not only is the 12-year-old Naota Nandaba contending with the absence of his adored older brother who’s moved to America to pursue a baseball career, he now has to put up with her unbalanced ex-girlfriend and the crazy alien girl who has seen fit to make his home hers. Naturally, he develops crushes on both of them.

More than being a story about any of these individual plot threads, FLCL is the story of Naota ‘coming to age’. He’s the emotional realism center in this otherwise wacky world which gives FLCL its signature unique flavor that has kept fans coming back time and again.

In the first season of FLCL, for the majority of its runtime Atomsk is nothing more than some mysterious alien entity off-screen, also known as the Pirate King. We know Haruko’s on the look-out for him, which is why he keeps pulling guitars and robots out of Naoto’s head, but we don’t really know why or even what he is. Due to x, y, and z he’s finally able to take over Naota’s body in the last episode of the original series but it doesn’t last.

We get to see a clearer picture of Atomsk in the 2019 FLCL Season 2 where once again he comes back to earth to wreak havoc. Despite Haruko’s interest in the Pirate King, the weird birdman never really commits to her.

Would you forgive a sweet and innocent high school girl for burning down her old school because the spiritual ‘Candido’ entity told her to do so on a cellphone? Mamimi Samejima isn’t the most stable of characters in a series that’s already full of whackos and nutjobs. She was the girlfriend of Naota’s older brother, at least according to her, but after he moved to America she’s started devoting all of her time to Takkun, which is what she calls Naota.

It’s pretty clear that Mamimi only spends this time with Naota as a means to make up for the absence of his brother, and that’s he’s starting to develop some actual feelings for her. Between that and being a genuine weirdo, it’s no wonder she finds comfort in make-believe gods telling her to wreak havoc and burn the town down.

Not that we personally advocate for that as a coping mechanism.

People tend to take Eri Ninamori pretty seriously considering she’s both the daughter of the town mayor and the class president of her classmates. She’s smart, sharp, and generally isn’t one of nonsense often finding the rambunctious antics of Haruko and Mamimi’s creepy obsession extremely and rightfully off-putting.

At first, she seems to have a distaste for Naota too, but when the third episode of FLCL forces them to spend some additional time together things change her particular conflict between getting caught up in being the perfect studious daughter and the loneliness she feels being disconnected from her busy parents is an effective one.

She’s not above playing a little dirty to make things go her way, really homing in on being the daughter of a politician, and considering this is an anime, after all, it’s less of what she wants and more of who she wants.

The only other tangible character from the original FLCL that actually makes the jump to FLCL Progressive, Canti’s role throughout the show builds as it goes on. He starts the series as a servant robot to the Nandaba family, after being possessed by the entity Haruko’s been chasing down. Over the course of the show he adopts the role of protector, physical part of a doomsday machine, and even an inspiration for Mamimi to go on the arson spree.

In FLCL Progressive Canti eventually makes his appearance and once again becomes possessed by Atomsk.

Amarao has been tracking down the nefarious Haruhara Raharu for a long time now. He’s known for his eccentric personality and his trademark fake eyebrows that are really just glued on pieces of seaweed. While his full history is never given in the OVA, it’s clear he had some kind of relationship with Haruko back in the day that’s probably analogous to Naota’s with her now.

Even to this day, he never got over that crazy Vespa riding alien, and experiences jealousy when it comes to Naota gaining her good graces.

Naota’s brother does have an actual name, Tasuku Nandaba in case you were wondering, but overwhelmingly he’s just referred to as ‘Naota’s Brother’ or ‘Naota’s Older Brother’.

What makes him an interesting fixture in the set up of FLCL is that while he never actually appears in the series his absence haunts every episode of the show. He became something of a successful baseball player at the young age of 17 and he’s gone off to America to pursue a career as a pro player.

His lack of presence deeply affects both Naota and Mamimi in different ways; The former generally has mixed feelings in that he very much looks up to his older brother but is deeply scared he can’t live up to him. Mamimi, on the other hand, has let her unresolved feelings for Tasuku mutate into an obsession with Naota, or Takkun as she calls him.