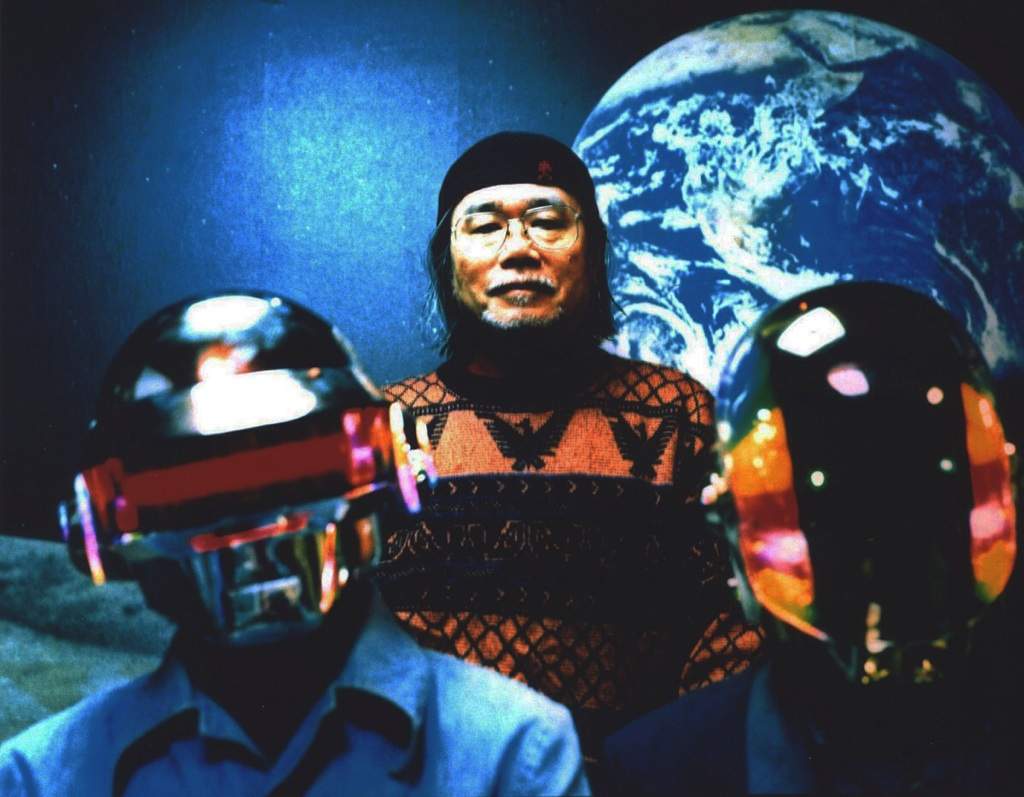 If you were a child in the early 2000s, chances are your first introduction to Daft Punk came as you were watching MTV or Cartoon Network’s late-night block of anime known as Toonami (for many of us, our first encounter with anime in general).

In 2001, Daft Punk released the music videos for ‘One More Time’, ‘Aerodynamic’, ‘Digital Love’, and ‘Harder, Better, Faster, Stronger’ off their newest album Discovery. The videos, like the music, felt new and wildly different from anything else out there at the time, mostly because each video seemed to tell a continuous story.

What was this show, this movie, you probably wondered? Where did it come from? The legacy of Interstella 5555: The 5tory of the 5ecret 5tar 5ystem lies in the work of noted mangaka Leiji Matsumoto and Toei Animation, and the effect it had on those that grew up with it. 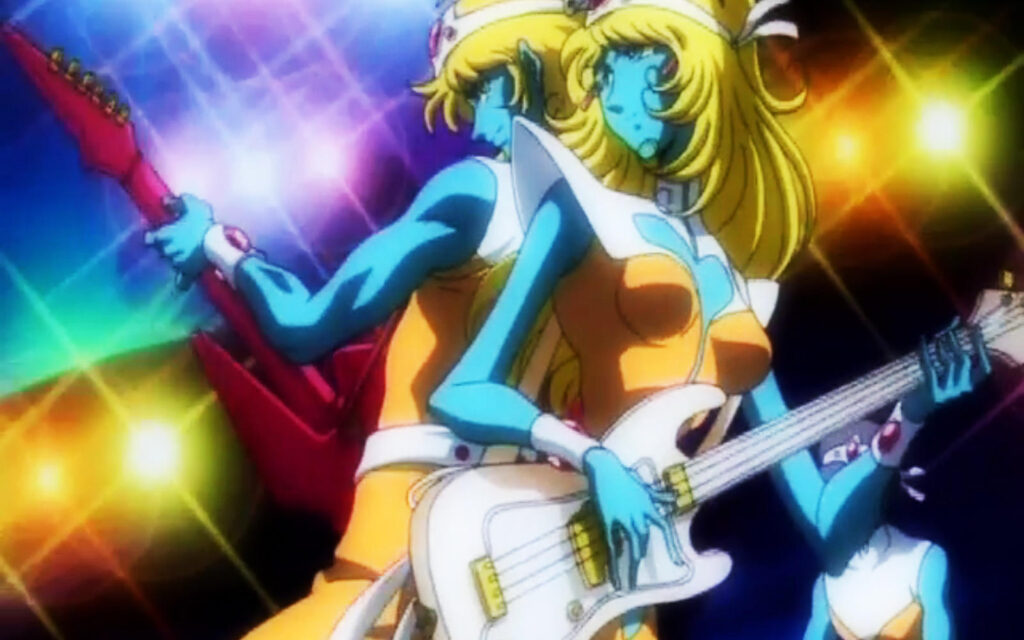 In the 1970s and 80s, anime was gaining an international foothold, most prominently in Europe. Television was quickly becoming a popular medium as TV sets became more affordable, and because of various socioeconomic circumstances, more and more European youths were spending time in front of it. Combined with the Japanese economic boom happening around that time, this meant that Japanese culture was primed to spread internationally, and European TV networks were snapping up series broadcast rights in a bid to get more content on-screen.

Leiji Matsumoto began publishing Space Pirate Captain Harlock in 1977, and in 1978 it was adapted into an anime by Toei Animation, then known as Toei Doga. Captain Harlock is described as the archetypical Romantic character, with a strong individualist philosophy at odds with the rules of society around him. Harlock also takes things like promises very seriously, even if they may mean his inevitable doom. Matsumoto has said in interviews that part of Harlock’s appeal as a character (other than his striking visage that includes a scar, eyepatch, and cape) is his ‘resolute nature of living out his resolve’.

In the original 1978 series, Harlock, captain of the space pirate ship Arcadia, defends the Earth from a race of aliens known as the Mazone while skirting the laws of a somewhat totalitarian future Earth. The character of Harlock won Animage magazine’s Anime Grand Prix for Most Popular Character the first year it ran in 1979. There have been multiple spin-offs, reboots, and OVAs since the anime’s original premiere, along with a CGI feature film in 2013. 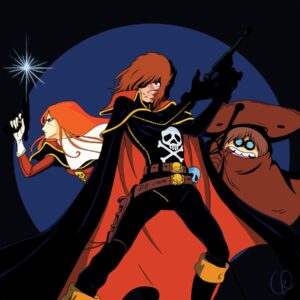 Because of its massive popularity in Japan, the series was a perfect fit to export and dub. In 1978 it was known as Albator, which was the new name given to Captain Harlock, more than likely to avoid confusion with the character of Captain Haddock, a side-character in the popular Belgian comic The Adventures of Tintin.

In 1982, Toei released a sequel to the original anime series titled Arcadia of My Youth: Endless Orbit SSX. The series followed roughly the same group of characters, and features a Harlock that had been banished from Earth while trying to defend it from a new alien threat that had taken it over. Throughout the series, Harlock and crew search for a mythical Planet of Peace where all life in the universe can live together in harmony. This series was also released in France in 1984, and to distinguish the two, French viewers would refer to the SSX series as Albator 84 and the original as Albator 78.

At this point you may be wondering, ‘Whoa whoa whoa, I thought we were talking about Daft Punk! You just spent the last five paragraphs talking about anime in the 70s and 80s! Where are my robots and/or blue aliens?!’ To which I would reply, ‘Wow, five paragraphs? Nice,’ but then I would also say, ‘Easy there, chief, we’re getting to that.’

Fast-forward to 1998, when Thomas Bangalter and Guy-Manuel de Homem-Christo, better known as Daft Punk, are at work putting together a follow-up for their album Homework, which had been released a year earlier. In interviews years later they would talk about wanting to do something different in Discovery and weren’t sure where to go with it. As they began working on a few songs that they would describe as following the ‘rules’ of House music, they began to think about how they wanted to present this album to the world. Later they would say that they couldn’t exactly remember when the idea came from, but at some point they thought to themselves, ‘Hey, what if we did an anime film with Leiji Matsumoto?’ 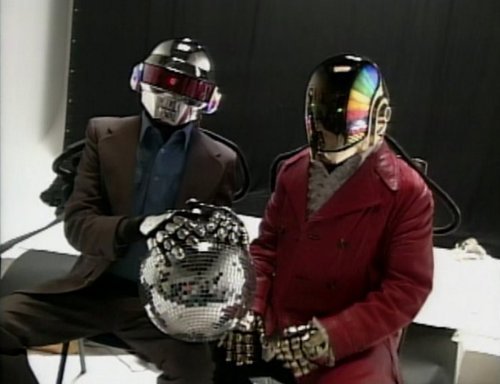 From there they began to craft a narrative informed by the music, and vice-versa. The group seemed to be interested in making a sort of space opera, and wanted to create a science-fiction story about the entertainment industry and that culture.

In later interviews Thomas Bangalter would explain that Discovery was musically a tribute to their youth, and what it felt like to be a child of ten years old, or even younger. ‘When you’re a child you don’t judge or analyze music,’ he told Remix magazine in 2001, two years before Interstella was released. ‘You just like it because you like it. You’re not concerned with whether it’s cool or not.’

In an interview with Toonami, Daft Punk also cited anime like Candy Candy and Grendizer, two other properties animated by Toei, as some of their favorites growing up. For an album that celebrates a childhood in the 70s and 80s, it would make sense to try to incorporate some aspect of that childhood’s entertainment into the music videos. 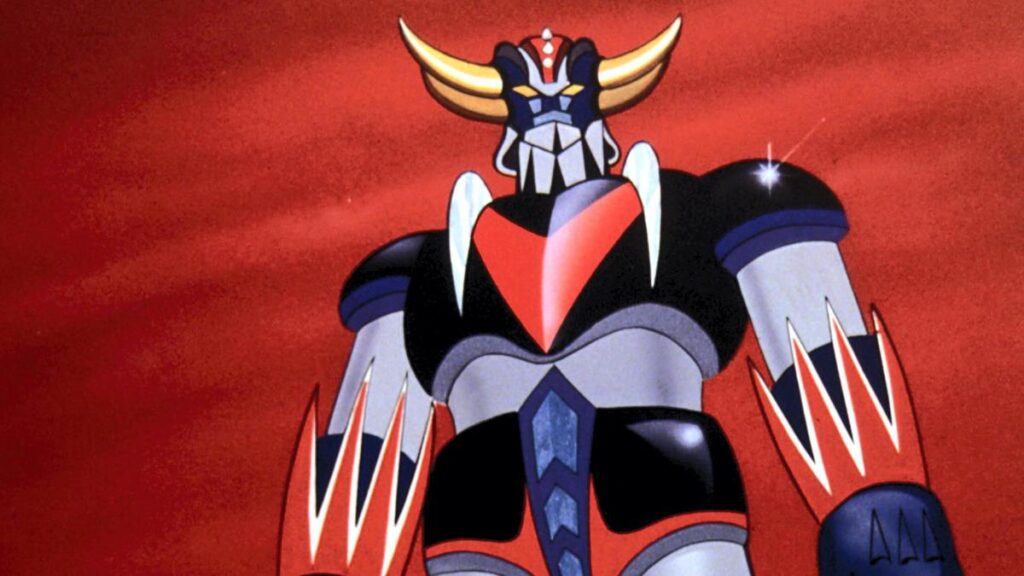 Daft Punk knew they wanted to work with Leiji Matsumoto on the videos and because they were self-financing the entire project, why not shoot for the moon? This collaboration was almost not to be, as when they initially reached out they didn’t hear anything back for a few months. They finally heard back from Matsumoto in 2000, and they were actually surprised by how enthusiastic he was about the idea. They headed to Japan with a copy of the album and the story and set to work.

Eventually Matsumoto would be credited as the Visual Supervisor, and worked with longtime collaborator at Toei Shinji Shimizu as producer. Shimizu had worked on Galaxy Express 999 and Harlock, and was familiar with Matsumoto’s work. But to helm Interstella 5555, Kazuhisa Takenouchi was tapped as director. At the time, Takenouchi had experience directing episodes of Sailor Moon and Dragon Ball Z, and other TV specials.

According to Matsumoto, he was heavily influenced by the ideals of European Romanticism, and these themes of chivalry and nobility can be seen in his works. Regarding Interstella, he’d always wanted to bring music and images together, as he’s always had a habit of visualizing while listening to music since he was a child.

As someone who grew up watching international films, he said that oftentimes he’ll draw with the image of how French women appear in French films in his mind. When Daft Punk, a French music group, asked to work with him on Interstella 5555, he considered it sort of a full-circle moment. 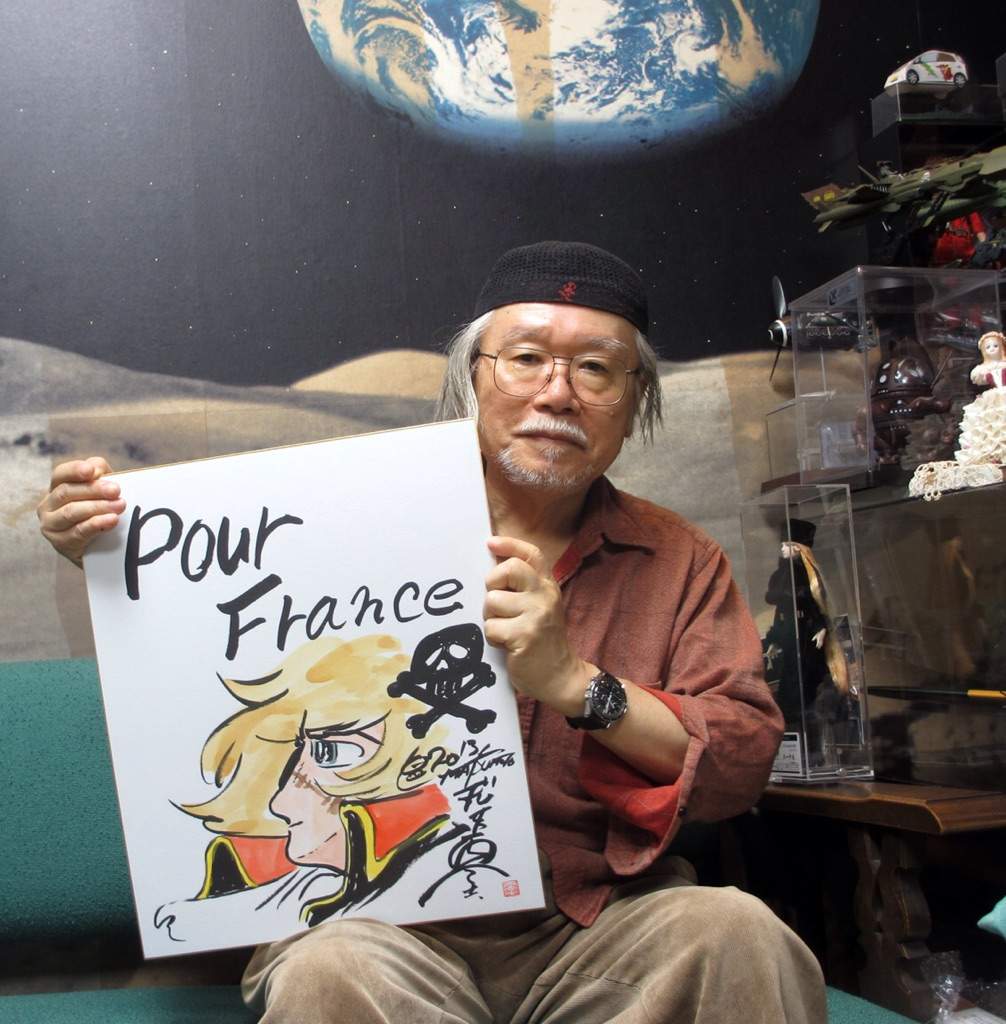 The influence of Leiji Matsumoto can be seen very strongly in the character designs of the alien band, known later in the film as The Crescendolls. The character Stella is highly reminiscent of many of Matsumoto’s female characters, with one publication saying that she’s practically a scarless version of Emeraldas, a female space pirate in the same canonical universe as Captain Harlock, or even Maetel, her sister who appears in Galaxy Express 999.

Long, slender female characters are somewhat trademarks of Matsumoto, and these designs would go on to influence other manga artists like Naoko Takeuchi, who created Sailor Moon. Similarly, the drummer Baryl bears a striking resemblance to Tochiro Oyama, Captain Harlock’s friend and creator of the Arcadia. 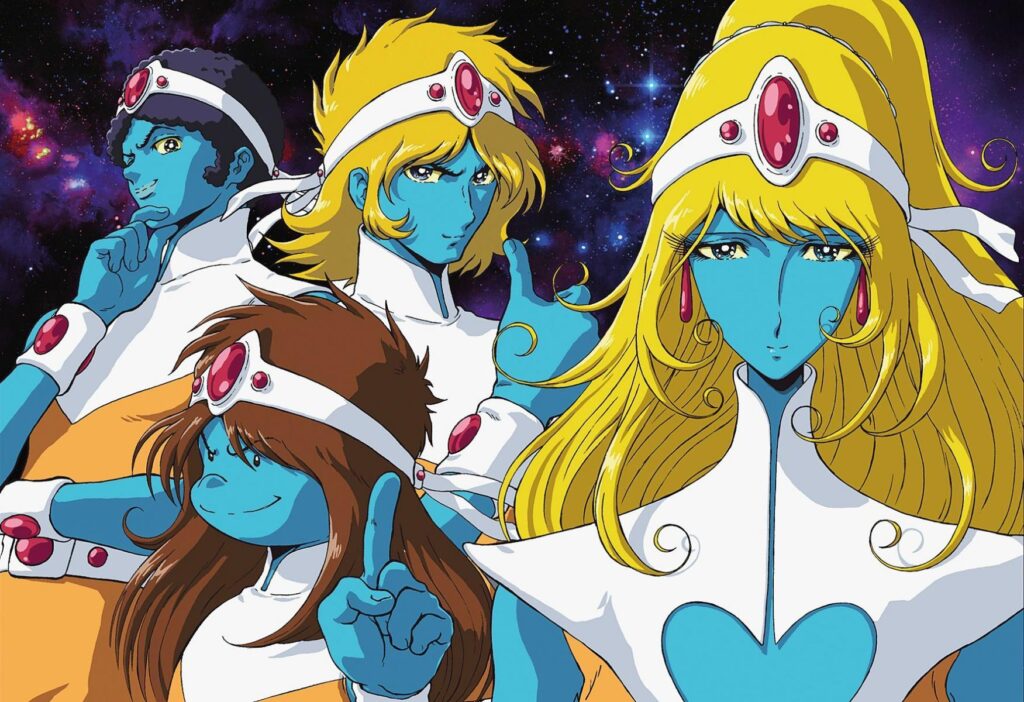 Interstella 5555 also deals with Romantic notions of chivalrous and impossible love, and noble sacrifices to protect those in danger; both are themes that Leiji Matsumoto was inspired by as he created his series. There’s a real sense of swashbuckling sci-fi throughout the film that can be traced back to Captain Harlock.

The arrival of Interstella 5555 can be seen as heralding the greater anime popularity boom. It was a labor of love, developed and produced by a duo of fans that had grown up loving classic anime and felt that that creating one was the best way to share their creation visually. While it may have bounced off of most critics at the time, it inspired and fascinated a whole new generation who had never seen anything like it before.

In retrospect, releasing the first four videos on Toonami was somewhat of a masterstroke, as the younger generation was already being introduced to anime through that block of shows, and screening something like Interstella 5555 turned out to be an important inflection point in making the anime the mainstream medium it is today.