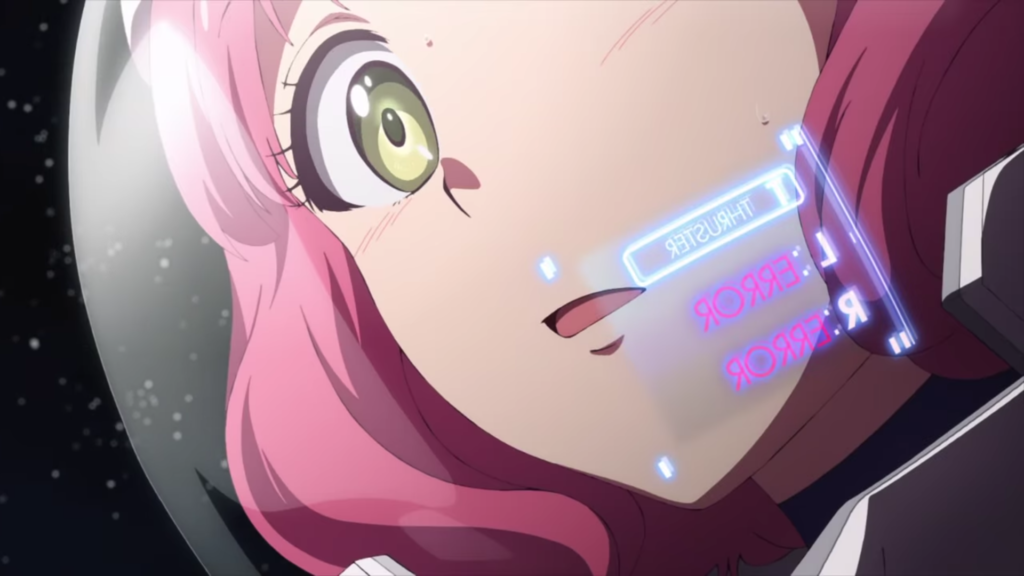 It was announced only a month ago that Shinohara Kenta’s latest series Astra Lost in Space would be getting an anime adaptation from Studio Lerche, which was incredibly exciting news given that I think it’s one of the best sci-fi manga released in the past couple of years. And now, with not long to go until the anime’s premiere date of July, Lerche has unveiled an atmospheric debut trailer for the project. Check it out below:

This trailer is focused on a scene towards the beginning of the story, where Aries is left floating in space as her suit’s thrusters stop working. The pure terror and panic of such a situation are expressed well in the trailer, as the camera pulls in claustrophobically close to Aries’ face and cuts erratically. Kanata then heroically comes to her rescue at the end.

All of this is remarkably original and distinct from how the scene plays out in the original manga, which mainly focuses on Kanata rather than Aries. I think this shows that there is some serious initiative on the part of director Masaomi Ando, as he clearly isn’t afraid to depart at least a little bit from the source material to craft an effective scene. In general, anime trailers also often tend to focus on cramming as much as possible into 30 seconds to draw viewers in as quickly as possible, so it’s refreshing to see a trailer such as this one focus more on mood and atmosphere.

To be honest, I was already super excited to see the story get animated, and this trailer has just gotten me even more excited. Along with the trailer though, we have our first cast members announced for the upcoming project. Hosoya Yoshimasa will be playing Kanata in what appears to be his first major role as a protagonist, although he is doing an excellent job as Asukai Jin in the currently airing Boogiepop anime. Joining him will be Minase Inori as Aries, who definitely is no stranger to major anime projects thanks to her roles as Rem in Re;Zero and Hestia in Danmachi.

From this trailer alone, then, the Astra Lost in Space anime is shaping up to be one of the shows to watch this summer season. I really hope that the anime can bring more people closer to the series, as it really is one worthy of praise.