Let’s Do The Time Warp Again: Re:Zero – Starting Life in Another World 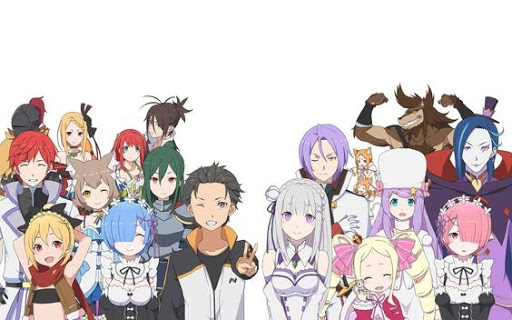 The light novel, manga and anime series Re:Zero is the darker cousin of KonoSuba.

Both series started out as light novels, before moving on to manga and anime TV shows. The publication timeline for both series is vaguely similar. They both involve somewhat cynical, modern young Japanese men who get transported into a medieval fantasy world.

If those parallels weren’t enough, Rie Takahashi is also the voice of both explosive Megumin in KonoSuba and half-elf Emilia in Re:Zero.

But, KonoSuba handles its Isekai themes with a lot of light comedy and humor. Re:Zero starts down that same road, and it has its moments of fun and laughter. But it doesn’t take long before it becomes clear that this is not going to be a silly or light-hearted take on the alternate universe fantasy theme. (The opening theme song is a pretty big clue to begin with.)

Starting Life in the First Episode

The full title of the series is Re:Zero – Starting Life in Another World, and that’s a pretty good description of where the story begins.

Somewhat surprising for an Isekai series, Natsuki Subaru doesn’t die in the first episode before he’s summoned to another world. There’s no talk with God or a goddess. There’s no explanation or exposition.

In fact, there is barely any introduction to the character. One moment, he’s on his way home from the convenience store; the next moment, he’s apparently been teleported into an alternate dimension.

Unlike some Isekai heroes, he thinks he has a pretty good idea of what’s going on. He was reading a manga right before he was transported, so that helps. He recognizes the medieval world as a fantasy world, which seems reasonable enough.

Unfortunately, that turns out to be more of a hindrance than a help. He’s extremely disappointed at his lack of weapons or equipment. He doesn’t appear to have any magic abilities. He doesn’t feel like the hero of a fantasy story.

Instead, it seems that he doesn’t really understand much of anything that is going on. He can’t read the language, so he wanders into a women’s bathroom and a pub for demihumans (put another way, furries). He soon meets a girl who calls herself “Satella” and her spirit animal, a flying cat named Puck.

At first glance, Puck seems to fill the same role as Happy from Fairy Tail; he’s a cute and sarcastic flying magical creature.

Death and Save Points

Subaru, Puck and “Satella” go on a little adventure together in town to retrieve an important insignia — and unfortunately, Subaru soon finds himself dead. However, he learns that he can reincarnate through a magic ability which he calls “Return by Death.”

The process involves rewinding time back to the past — and here’s where Subaru’s problems begin. It’s all well and good when you’re playing a video game for your player character to be able to loop back to the last saved checkpoint. It’s quite another thing when you yourself are the player character who has to die in order to get an extra life or a second chance — and you can’t get beyond the last save point until you solve whatever obstacle keeps getting in your way.

It’s sort of like a Groundhog Day loop, and there are certain rules which must be followed — he has to die, he can’t tell others about it, and every time he uses the ability, it attracts the attention of magical beasts.

Subaru dies a couple of times just in the first episode, and he keeps dying throughout the series. He eventually determines that a curse was placed on him somehow.

It takes several deaths, and a couple of episodes, before Subaru learns that “Satella’s” real name is Emilia. Emilia is a candidate to become the next ruler of Lugunica. It seems that kings are chosen by royal election, rather than automatically going to the eldest royal heir — which, as it turns out, is a real thing which actually sometimes happened in the Polish-Lithuanian Commonwealth, Bohemia, Malta, Sweden and a few other places.

Emilia is just one of several possible candidates, and she is supported by Roswaal L. Mathers. Roswaal is a wizard and a Margrave (a fancy word for military commander) who appears to be something of a noble, aristocratic weirdo. Roswaal is voiced by Takehito Koyasu, who played the equally weird (although in a slightly different sort of way) Excalibur in Soul Eater. There are a lot of dark secrets to Roswaal which will be revealed over time.

Subaru ends up living as a butler at Roswaal’s castle. Also living there are the twin maids Rem and Ram. Rem is the blue-haired one; Ram’s hair is pink. Rem is the younger of the two, and a better cook. Eventually

it is revealed that Ram and Rem are demons. 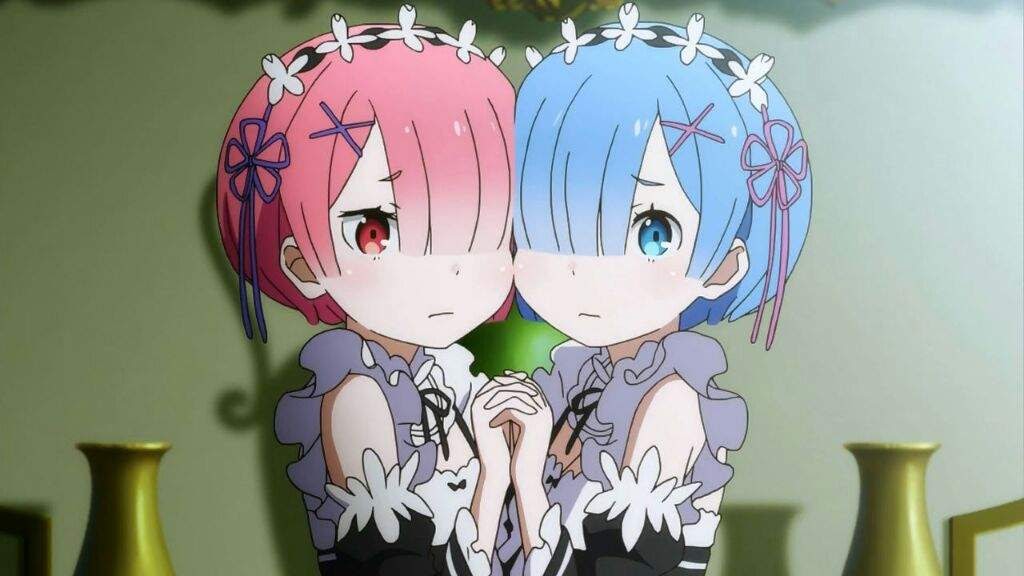 The mansion is also home to Betty, or Beatrice. Beatrice is a lolita mage who seems to live in the library. The library can move around the mansion as Betty desires, but Subaru has the uncanny ability to find it. She really likes Puck, but initially can’t stand Subaru. Despite this, she agrees to protect him.

The people at the castle, along with a few others, make up the Emilia Camp, a team which supports Emilia’s election. The other candidates have their own camps.

Naturally, a candidate for the throne of Lugunica would have enemies, and we meet a couple of Emilia’s enemies in the first few episodes.

Elsa Granhiert is an assassin who kills Subaru in the first episode. She wants Emilia’s insignia, but is forced to flee.

Felt is a rival candidate for the throne — although, she doesn’t start out as one. She is the one who stole Emilia’s insignia, and is later revealed to be a worthy candidate. She wants to destroy the current system.

Several times when Subaru dies and the timeline has to be reset, he is left with mysteries to solve — how exactly did he die, how can he prevent being killed again, and how does the curse (or curses) placed upon him work. There are also certain secrets about the kingdom and stories to be revealed about the real Satella, the Witch of Envy.

Something of a jealous love triangle, or possibly several of them, develops in the girls’ varied friendly relationships (i.e. Ram, Rem and Emilia) with Subaru. Subaru and Emilia go out on a date, but Subaru ends up dead (again).

In one timeline, Rem suspects Subaru of belonging to a Witch’s Cult, because he smells of witches. Rem ends up dead, which leads Ram to try to kill him. The world has to be reset again.

Magical beasts called Mabeasts attack Subaru. The Mabeasts are attracted to Subaru’s “Return by Death.” Ram and Rem’s demon history is revealed, and the Mabeasts are defeated with help from Roswaal.

About halfway through the first season, Subaru and Emilia are summoned to the capital. They are escorted by Felix, a member of the Royal Guard; and Wilhelm, a retired member of the guard who is the grandfather of the knight Reinhard.

At the capital, we are introduced to a couple more of the royal election candidates, Priscilla, Anastasia and Crusch.

Priscilla is a totalitarian beauty and the head of House Barielle. Anastasia is head of the Hoshin Trading Company. She speaks with a Kansai accent. Crusch is head of House Karsten, who believes in meritocracy.

The Royal Candidate Selection goes badly, starting with Felt being introduced as a candidate at the last minute. There are insults thrown around, verbal and physical fights, a duel and other arguments. Emilia and Subaru go their separate ways.

Subaru fights the Witch Cult and their leader, Petelgeuse Romanée-Conti. The mansion is attacked. Subaru rewinds the clock again, and seeks the aid of the other royal candidates.

Subaru encounters the mysterious White Whale, a Mabeast. The White Whale can kill people with its white fog. People who are killed by the fog are erased from people’s memories. Rem is killed and erased from memory — but Subaru still remembers her.

Subaru tries to tell Emilia about his ability to rewind time, but she dies. When Petelgeuse and the cult return, they encounter a giant, monstrous Puck. Puck kills the cult and freezes Subaru to death.

Subaru decides to go after the White Whale. He gathers up allies from Crusch Camp and Anastasia Camp. The battle goes badly, but eventually Wilhelm kills the whale.

Subaru then attacks the Witch’s Cult. The cult members can possess people, and there are spies in the village.

At the end ofthe first season, Petelgeuse dies, Subaru and Emilia are together and the day is saved — at least, until Season 2 starts

Re:Zero started out in 2012 as a self-published web novel by Tappei Nagatsuki. It was picked up by Media Factory in 2014. Since then, 23 light novels have been published, plus various side stories and short story collections.

According to Crunchyroll, season 2 of Re:Zero – Starting Life in Another World will begin on July 8. The second season was first announced in 2019. The release date was delayed by COVID-19, but it was updated on June 24, so that’s probably pretty accurate.

You can watch Re:Zero at Crunchyroll, which makes sense as Crunchyroll holds the North American license. Depending upon where you are, you can watch it in Japanese with English subtitles, or dubbed into English, Spanish or Portuguese. (The Russian version isn’t available here, so it’s unclear if that version is Russian dubbed or with Russian subtitles.)

Crunchyroll also has the Director’s Cut and the 76-minute OVA, The Frozen Bond. These are available from the same webpage as the main story.

The 60-minute OVA Memory Snow is listed as Episode EX of the Director’s Cut.

All of the short stories are also available at Crunchyroll, under the collective name Re:ZERO – Starting Life in Another World – Shorts.

For a really silly and weird take on the Re:Zero characters (and several other Isekai anime shows), you can also watch Isekai Quartet at Crunchyroll. This crossover spin-off series features a mixture of Kadokawa characters attending high school. In this version, Roswaal is a teacher, while Subaru and Kazuma are essentially the same character.

Funimation released Blu-ray editions of the first season of Re:Zero. According to Anime News Network, there were color banding problems with the first discs. Re:Zero can also be spelled Re: Zero or Re:ZERO. Crunchyroll capitalizes ZERO; TV Tropes doesn’t.