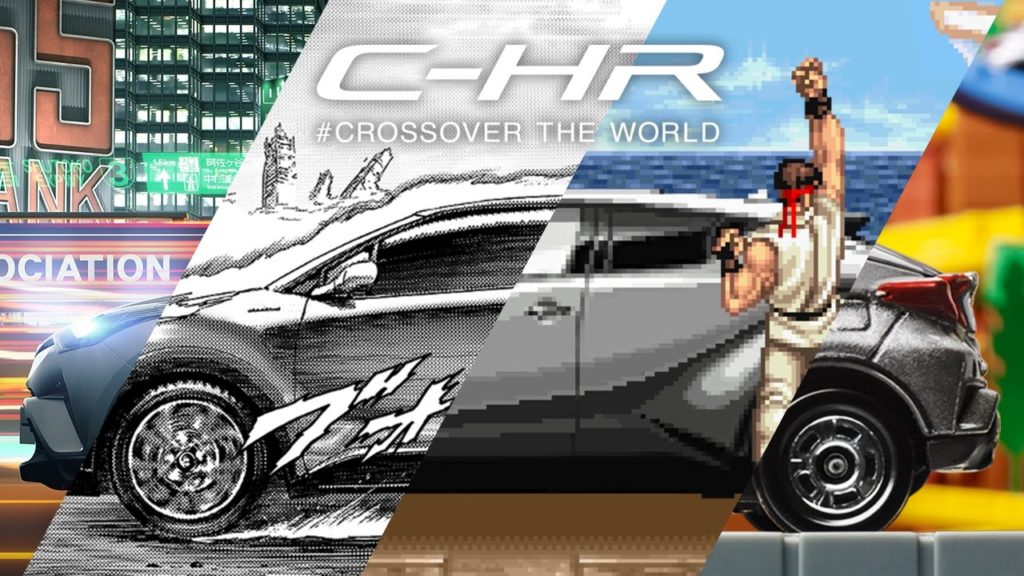 In the middle of Japan, located somewhere between Tokyo and Osaka exists the city of Nagoya. Known for their delicious chicken wings and shipping exports, Nagoya is also the birthplace of motoring giant Toyota. Founded over 79 years ago, Toyota has witnessed firsthand the evolution of Japanese pop culture, and the prominent influence it’s had on Japan as a nation. So it comes as no surprise that the company would work so closely with said pop culture to help promote it’s cars, right?

Late March, Toyota began streaming a series of commercials titled “CROSSOVER THE WORLD”, which places their latest C-HR Model inside the world’s of some of Japan’s most famous series’. Featuring the likes of Akira, Fist of the North Star, Street Fighter, and Tomika, the commercials presented a somewhat unique take on the decade-old formula for brand advertising. Coming across more like a homage than traditional advertising, there’s a certain level of detail and care shown in each of the four commercials.

The above video showcases Toyota’s collaborative works with Yoshiyuki Okamura’s 1983 Fist of the North Star. Calling on the manga’s signature stylistic traits, viewers are whipped out of their inviting highway aerial-shots into a gritty post-apocalyptic world controlled by wasteland gangs. Tugging on the strings of nostalgia, Toyota flawlessly emulates one of Japan’s most historic manga. Prior to this, footage combining the world of 16-bit Street Fighter II and a similarly animated C-HR model was released via YouTube. But why do these videos exist?

As of 2012, the median age of childbirth in Japan was roughly 30 years old. For a lot of individuals looking at starting a family, and perhaps needing to purchase their first real car throughout 2017, these are the series’ they would have grown up alongside. If you weren’t at the arcade stepping into the world of Street Fighter II, you were at home watching Kenshiro fight his way through the desolate wastelands of Fist of the North Star. The pre-existing relations that people hold with these series on both a personal and cultural level makes them the perfect choice for an advertising campaign, and an overall genius move from Toyota.

In the past there was a massive push from Toyota during the airing and publishing of Shuichi Shigeno’s Initial D. With a heavy focus on the Corolla AE86, which plays a prominent role in the series, Toyota was able to carve their own niche within the anime world, further paving the way for their present-day collaborations. In July 2016, Toyota UK uploaded a video showcasing their latest GT86 tackling the same course that much of the Initial D manga was based around.

It’s worth noting this isn’t the first time we’ve seen the crossover of motoring and anime, in late-2016 Ford Motoring, released a series of collaborative advertisements with franchises such as Dragon Ball Z, Sailor Moon, and Metal Gear Solid. Rather than creating a universe surrounding their product, however, the automotive company chose to dub pre-existing clips from the original series’, having characters fantasize about their dream car, which just happens to be a Ford.

Whether you love it or hate it, the worlds of automotive engineering and anime are colliding in some seriously unprecedented ways. If it’s not a commercial, it’s an original anime in collaboration with Studio 4°C (Yes, Toyota has already done it). While all of this hasn’t got me rushing out the door to buy a new car, it’s definitely interesting none the less. If you’re interested in finding out more details, you can find them on Toyota’s official website.