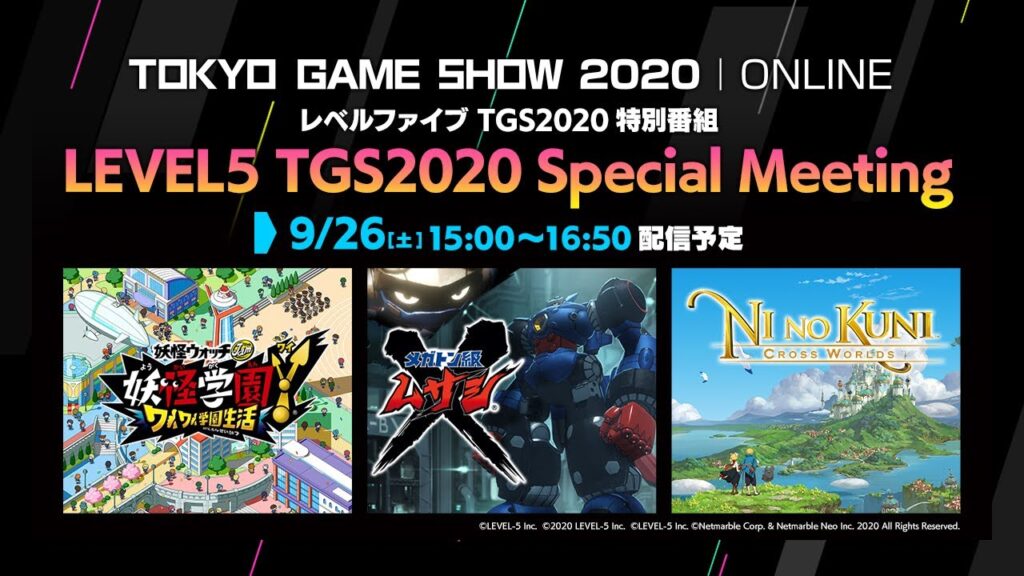 While they may not have a large-scale plan for multiple days of streams to coincide with Tokyo Game Show Online 2020 unlike companies like Square Enix, Level-5 do have plans to showcase their upcoming game’s at this year’s event. The company have 3 titles to show off during a 2-hour livestream planned for the event this year, although their line-up is defined more by the game that’s not present than the game’s they plan to show off.

Each of the three titles that will be showcased at the Level-5 TGS2020 Special Meeting each have distinctly different target audiences, with the hope that the company’s Tokyo Game Show Online 2020 showcase can attract the largest crowd possible to their lineup of upcoming titles.

First up the company will be showcasing Yokai Gakuen Y: Wai Wai Gakuen Seikatsu, the latest Yokai Watch spin-off title that released in Japan last month, with the company showing off content from the title’s big planned update. There will also be a new preview for Megaton Musashi, the co-op robot action multimedia property currently in development, and the planned Ni No Kuni spin-off Ni No Kuni: Cross Worlds.

The line-up is mostly defined by what’s missing, however. Once again, the long-delayed development of the latest Inazuma Eleven: Great Road of Heroes, originally announced as Inazuma Eleven Ares and planned to release alongside the anime in Summer 2018 before multiple delays have pushed it into 2021 as a standalone game, won’t be present at the event. In a tweet from CEO Akihiro Hino, development on Yokai Gakuen Y has been prioritized for business reasons, and after the sunken cost and delays the Inazuma Eleven title has already experienced, perhaps that make sense.