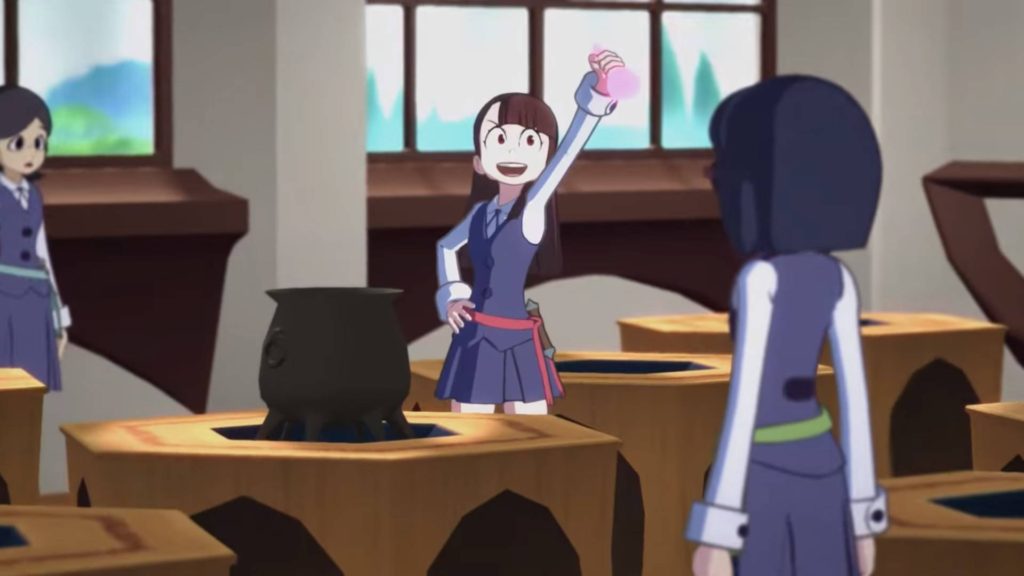 To say that I’m excited for the newly-announced Little Witch Academia: Chamber of Time would be a collosal understatement. It’s shaping up to be quite the magic-filled bundle of fun. I mean, brand-new animation from Studio Trigger for the cutscenes and a gorgeous in-game style that remains faithful to the charm of the original 2D animation? Games with an anime visage have been looking great recently, but it’s not every day you see something so immediately striking.

As an action RPG and beat-’em-up hybrid, the game appears to only allow you movement on a 2D plane, though in clever ways that see you also moving towards the background and foreground in this pseudo 2.5D way. It wouldn’t be a brawler without some insane power ups and moves, and the trailer confirms they will be there in plenty. Check it out below:

A few new witches have been confirmed playable, which is always welcome news. In addition to Akko, Lotte and Sucy, three new girls have been added to the roster, namely Amanda, Constanze and Jasminka. Thank you, Constanze, for confirming giant playable mechs. Along with that glorious display, it puts my mind at ease to know that all of the characters are bringing their A-game when it comes to their quirks and magical abilities.

Luckily, Bandai Namco have recently confirmed that they will in fact be localizing the game for Western audiences, so expect to see it in early 2018 for both the PlayStation 4 and PC. They’ve provided an official synopsis as can be seen below.

Having been inspired by a famous witch named Shiny Chariot, an ordinary girl named Atsuko (Akko) Kagari enrolls at Luna Nova Magical Academy, a prestigious school for young girls training to become witches. Before starting summer vacation, Akko and her new classmates find out about an inexplicable phenomenon at Luna Nova caused by the Seven Wonders, which has been passed down for several centuries. Now it’s up to Akko as she takes on the adventure to unravel the mystery surrounding the Seven Wonders.