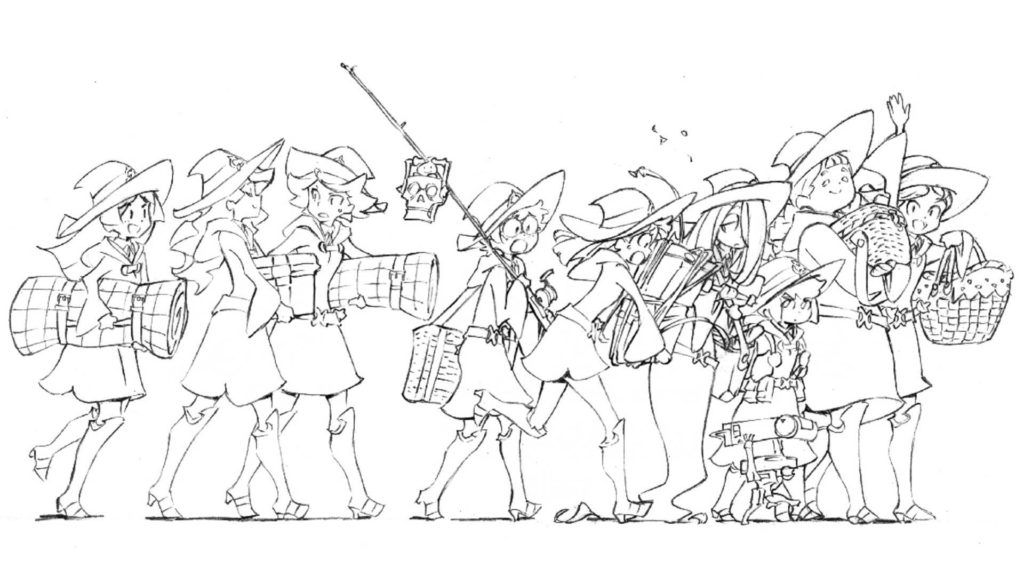 Yusuke Yoshigaki has played a crucial role in bringing some of anime’s most beloved stories to life. He began his career at Gainax almost immediately upon graduating from the prestigious Yoyogi Animation School in Tokyo, the oldest institution of its kind in Japan. Working primarily as a key animator — one who draws the “genga,” or keyframes, of any given piece of animation — Yoshigaki has laid the groundwork for the many breathtaking scenes we’ve seen in many Gainax anime like FLCL, Tengen Toppa Gurren Lagann, and Panty and Stocking with Garterbelt.

When many of his peers decided to leave Gainax for greener pastures, Yoshigaki followed suit by joining Studio Trigger with his close friend and fellow key animator Hiroyuki Imaishi. There, he would go on to work on key animation for When Supernatural Battles Became Commonplace, and of course, most recently, Little Witch Academia. Now, an upcoming exhibition in Tokyo aims to shed even more light on Yoshigaki’s work on the series. SF gallery. in Nakano, Tokyo, will host the “Yoshigaki Yusuke Gengaten – The Art of Little Witch Academia” exhibition from November 16 to 28. The exhibition will be open every day, except Wednesdays, from 1:00 pm until 9:00 pm JST. Entry is free of charge.

You can expect to see not only original genga, but also character design sheets and a plethora of Yoshigaki’s private sketches and drawings.

A one-man exhibition such as this is certainly no small deal, and in their official news release, Studio Trigger spared no words of praise when it came to Yoshigaki’s accomplishments.

Carefully surveying and observing – packing tons of ideas into one drawing. Layouts that make us feel the drama even outside the realms of a frame. For 20 years, he has been acquainted with Hiroyuki Imaishi, who has described him as the “ideal animator.”

If you are going to be in Tokyo over the course of the next month and are also a Little Witch Academia fan, then I can’t think of a better way to spend zero money on what is shaping up to be a truly special bit of anime tarriance.