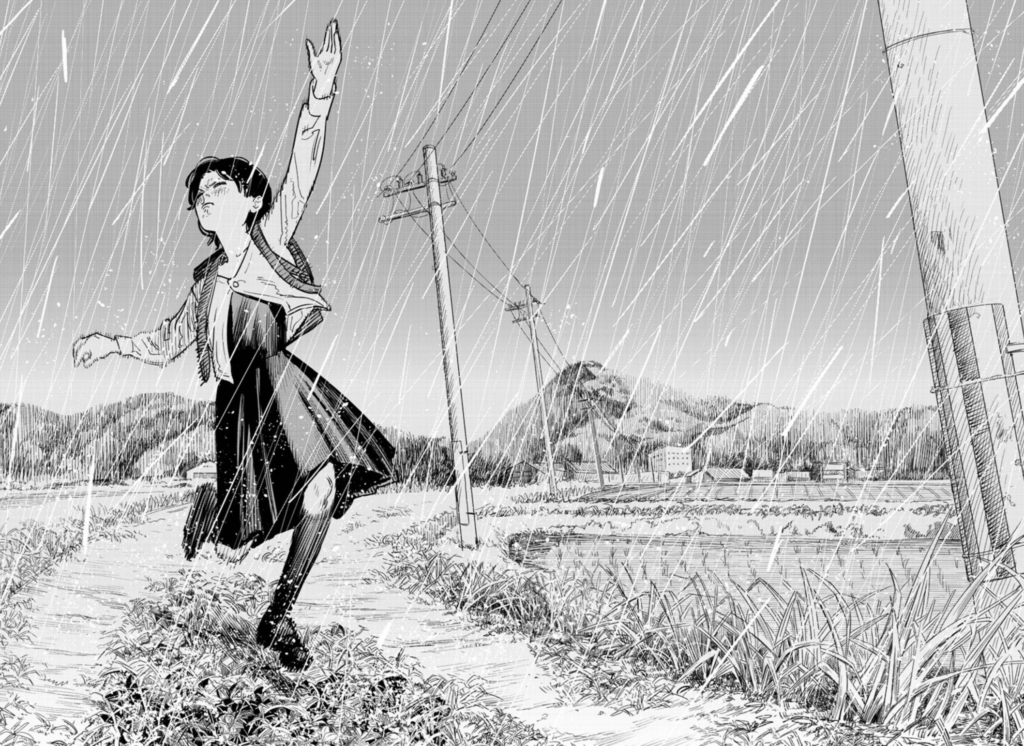 How do you separate art from the artist? Is it by erecting an arbitrary wall, or do you simply accept the fact that an author’s own life experiences always shape the kind of stories they create? For that matter, how do you separate fact from fiction when almost every piece of media is influenced by the environment that it finds itself in? Look Back poses all of those questions and more, evoking real-world tragedies along the way.

Even if Look Back hadn’t turned out to be as thoughtful as it was, it would’ve seen a similar reception. This is the first thing that Tatsuki Fujimoto has released since bringing Chainsaw Man to a close last December in the most idiosyncratic way possible, after which the author’s star has only continued to rise. His series actually finished up as one of the highest-selling in the first half of 2021, despite not yet having an anime.

As a result, many more people were paying attention when Look Back dropped on Jump Plus in Japanese and then Manga Plus and VIZ Media’s Shonen Jump in English on Sunday night. It managed to become the number one trending topic on Twitter in Japan shortly afterwards, drawing words of praise from across the industry. Blue Period author Tsubasa Yamaguchi, in particular, described it as ‘143 pages like a flash of light.’ 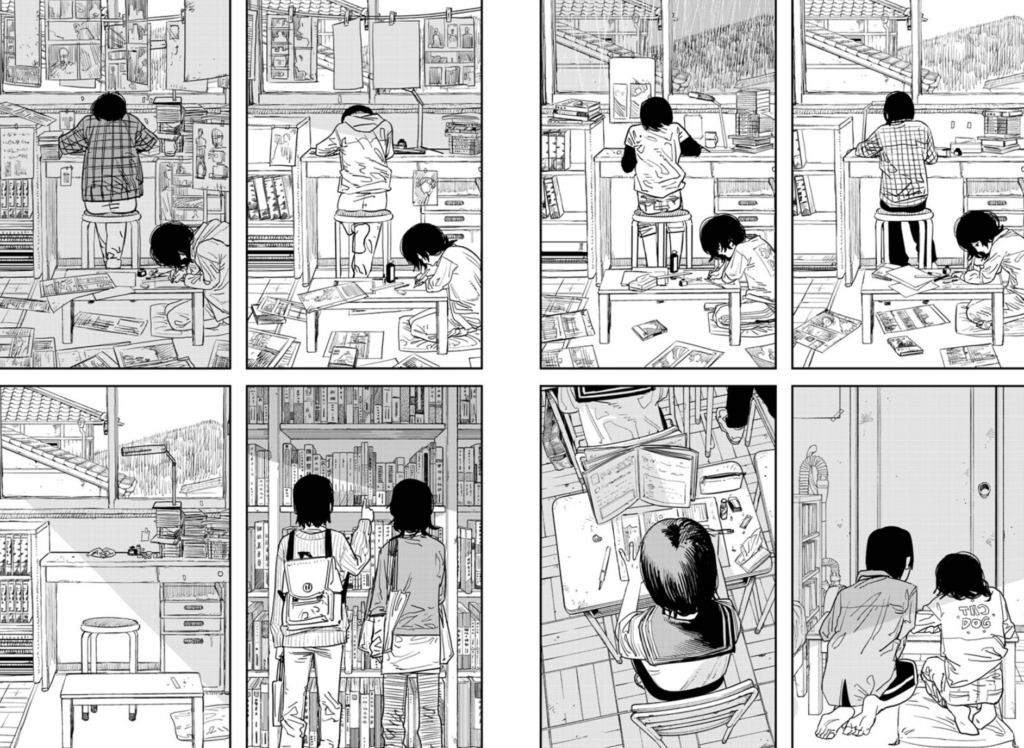 Clearly, the sheer reach of Look Back cannot be attributed to name recognition alone, but it certainly plays a part. The reason why it has struck such a chord with professional creators is because it explores the very basic question of why they do what they do: at its heart, Look Back is a coming-of-age story about the manga artist Ayumu Fujino and her relationship with the shut-in Kyomoto. This is what pushes her to improve her craft and eventually make her series debut, but tragedy soon strikes.

After parting ways with Kyomoto so that she can enter art school, she’s attacked by a man with an axe and passes away. This causes a crisis of faith of sorts as Fujino blames herself for Kyomoto’s death, given that she was the one who initially brought her out of her room. She even realizes that she doesn’t even like drawing manga: she only did it because she liked to spend time with Kyomoto. It all feels a bit depressing and hopeless, mirroring the worst parts of Inio Asano’s Downfall.

Nevertheless, if the title of Look Back is taken from one of Britpop legends Oasis’ most popular songs, then neither this incident nor Fujino’s eventual decision to return to work should be taken as such. Instead, it is up to us and these characters to move on; to stop looking back at the past and instead towards the future. Don’t look back in anger, I heard Fujimoto say. 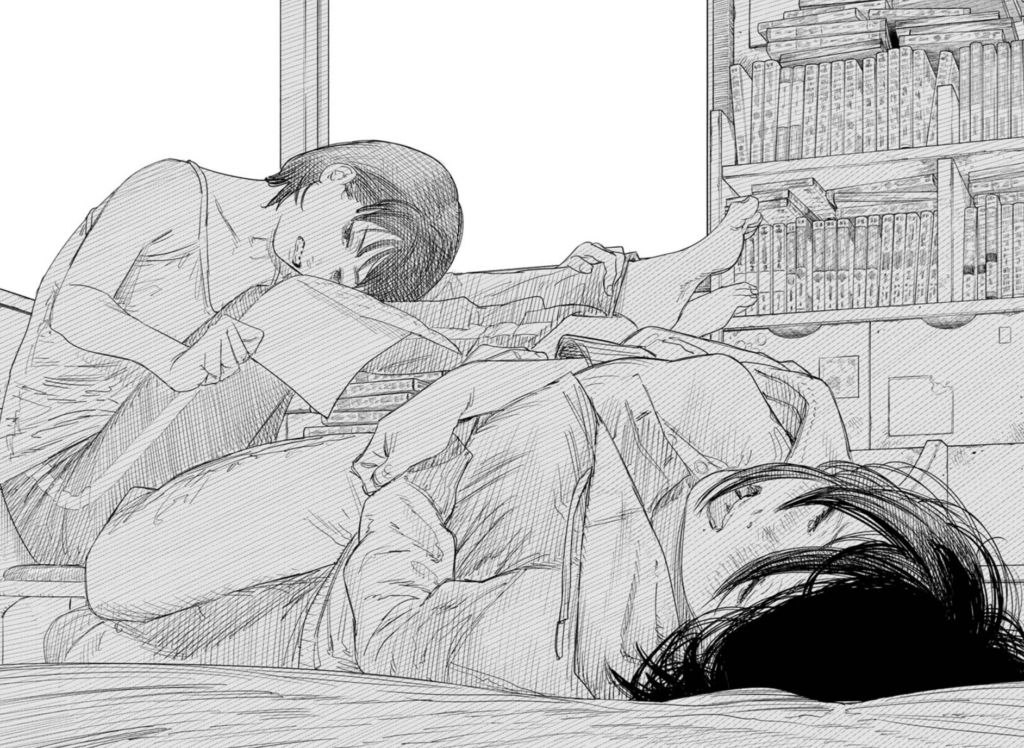 The fact that the names Fujino and Kyomoto can be put together to form Fujimoto leads to the assumption that something similar happened to the author in his personal life. Was someone important to him also taken away in a thoughtless tragedy? That might be a bit of a reach with no evidence, but it does show in a very striking way similar to the latest chapter of My Hero Academia that who we are as individuals is inextricably linked to the actions of others. At the very least, someone encouraged him along the way to where he is today.

Further parallels can be drawn with the real world when Kyomoto’s axe-wielding assailant screams about her plagiarizing his ideas. Clearly, he’s suffering from some sort of schizophrenic episode, but this was exactly the same justification that the man behind the KyoAni arson attack gave to police. It wouldn’t be too much of a stretch to say that Look Back was inspired by this incident, especially considering how much coverage it got.

Understanding where reality ends and where fiction begins in Look Back is exceedingly hard. Indeed, it’s also hard to point out inspirations without putting words in Fujimoto’s mouth, but it does make us even more excited about the potential of Chainsaw Man part two when it launches on Jump Plus sometime soon. Perhaps this one-shot is some indication of what we can expect.

You can read Look Back in English for free on Manga Plus and VIZ Media’s Shonen Jump. Check out the Jump Time tag for more weekly manga coverage!