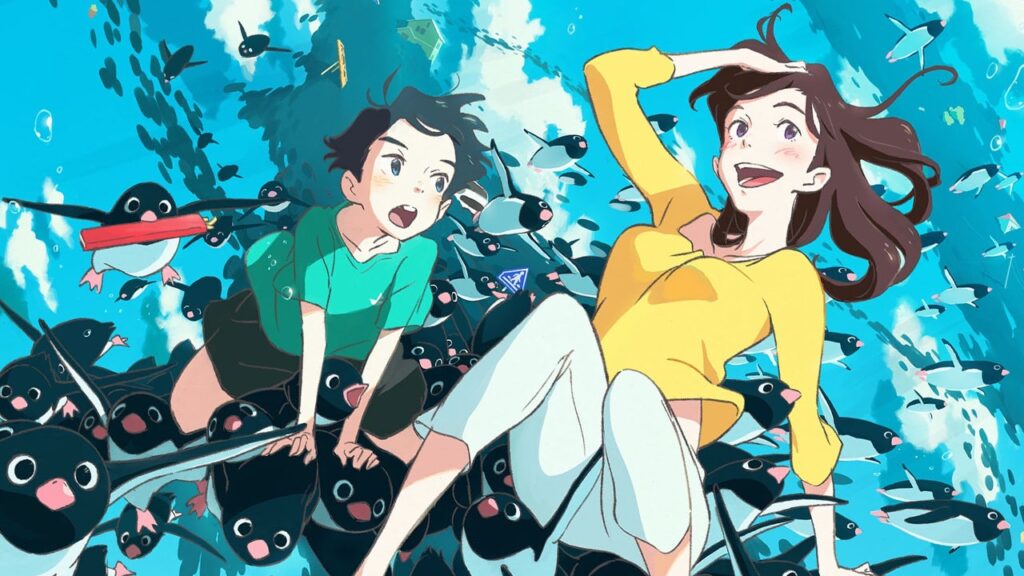 Penguin Highway is a 2018 movie based on Tomihiko Morimi’s 2010 novel of the same name. A 3-volume manga adaptation was also released in 2018. It was also nominated for the VFX Japan 2019 Awards.

Penguins suddenly appear in a town with no explanation. Aoyama, a 4th grader, begins to research the penguins to figure out where they’re coming from. While Aoyama is an excellent researcher, he enlists the help of his friends Uchida and Hamamoto to help investigate the strange appearances of the penguins.

Their research leads them to discover a woman who creates penguins and an eerie floating sphere of water in the middle of a forest they call the ocean.

What I really enjoyed out of the film was watching the children act like actual children. In a lot of recent films, there is a trend where children act like adults. Penguin Highway is not one of those films, and it is shown through the protagonist, Aoyama.

Aoyama is devoted to his studies. Every day, he takes the time to research something new. When the mysterious appearance of penguins appears, he comes up with a series of hypotheses and conducts experiments to seek out the truth.

He’s loyal to his friends and does what he can to receive his own form of justice. When his friend, Uchida, is bullied by Suzuki, Aoyama gets revenge by telling Suzuki that he has a disease that can only be cured if the dentist takes out all of his teeth. It’s a very innocent way of getting justice, but also a very funny and childish way of going about it.

He’s also very confident in himself and openly curious about his feelings about his crush, the lady at the dentist’s office. It is rather awkward to hear him talk about his fixation on the lady’s breasts and compare his mother’s breasts to her breasts. Then again, children as curious and as him have the tendency to ask rather bold questions that make adults and other children uncomfortable.

All of these qualities are what make Aoyama an interesting protagonist. He’s pretty easy to understand and relate to on some level, but he also has a thirst for knowledge that piques your interest.

Its Realistic Take on Sci-Fi

The story is light-hearted and does a great job presenting the wonder only a child can experience and the pains of growing up.

When the penguins show up to town, Aoyama begins to wonder where they are coming from and comes up with several hypotheses. Some of them are realistic such as penguins escaped from the zoo, and others are more outlandish such as aliens. Out of curiosity, he does what he can to test out these hypotheses before he finds out the truth.

After finding out the truth, Aoyama’s curiosity gets the better of him, and he begins to run tests on the penguin manifestations. He is excited by the developments and wishes to figure out more about the phenomenon.

However, Aoyama is in no rush to figure out this mystery. He takes his time analyzing each perspective and also takes the time to enjoy being a kid. Throughout the film, we see him enjoy festivals, trips out with his friends, and being around the lady.

As a coming of age story, Aoyama learns the hardships that come with growing up. He experiences his first love and all of the confusing feelings that come with the territory.

In true Aoyama fashion, he picks at it from a logical perspective.  He does not fight his feelings; he just wants to know why he feels these things. Watching him struggle with his feelings throughout the film is endearing to watch.

The animation is also amazing to look at.

When it comes to animated films, many compare films to the work of Studio Ghibli. However, Studio Colorido has its own style that has its own charm.

The film focuses on bright colors, simple backgrounds, and more emotive, dynamic characters. It also puts an emphasis on Aoyama and his adventures that make a simple walk through town interesting to look at. Even watching him study in the opening scene is animated in a way where I found myself curious in his notetaking and his studying.

It’s a simple, but effective style that makes it a very enjoyable film to watch.

One thing that is rather questionable is the relationship between Aoyama and the lady. On Aoyama’s side, it’s understandable why he wants to spend a lot of time with her. He’s a kid with a crush on her, and it’s cute.

However, the lady doesn’t do much to wave him off. She encourages him, and at the end of the film, she says she’ll wait for him. Maybe I missed something, but for me, it’s a little sketchy. I’m just going to tell myself that she hopes that he grows up and finds someone more appropriate for him.

Besides that, it’s a very cute film to watch. I highly recommend it if you’re looking for a fun film that doesn’t require too much thinking and has great animation.