Looking Into the Manga Industry Through Bakuman

Ever wondered what the creators of Death Note did after its conclusion? Tsugumi Ohba and Takeshi Obata switched gears and created Bakuman, a series that depicts the realities of being a mangaka.

While the series wasn’t as popular as its predecessor, it did give audiences a look into the long, arduous process of creating manga and a look into the industry loosely based on their own experience.

Bakuman tells the story of high school students Mashiro Moritaka and Akito Takagi as they set out to become a successful mangaka, taking the pen name Muto Ashirogi. Their journey isn’t an easy one as they face countless roadblocks in the industry and within themselves.

The journey is just as long and arduous as creating a successful manga, but it shows that success can be achieved through hard work and passion.

Akito is the writer half of the Muto Ashirogi duo. He may not be great at drawing, but he is an excellent writer, but he does struggle writing gag comedy. Like Mashiro, he’s extremely competitive, but he takes the public’s criticisms too harshly, which leads him to take out his frustrations on those closest to him.

However, he’s always ready to defend his friends and punch a few people out if they disrespect them.

Miho aspires to be a voice actress; however, she’s incredibly shy and will only speak loudly if she has to get someone’s attention. She’s determined and will stand up for herself when push comes to shove. She first gained popularity for her appearance and was pressured to do a gravure shoot, but she ultimately refused as she was uncomfortable with it.

Kaya is Muto Ashirogi’s assistant. She’s rather self-conscious of her appearance and is horrified by people who compliment her appearance. However, she’s a fun girl who always brightens up the environment when the trio is working on their manga. She has an extensive background in martial arts and will not hesitate to throw a punch when angered.

Eiji is Muto Ashirogi’s main rival. He’s an extremely talented artist and writer, which quickly leads him to high accolades within the industry. He’s dedicated to his craft and respects everyone who writes manga.

Is the Manga Different From the Anime?

No, it really doesn’t make a difference if you read or watch the series. The manga’s 176 chapters are faithfully adapted into 75 episodes. It really boils down to your preference, and both renditions of the series do an excellent job at documenting the harsh reality of a mangaka. 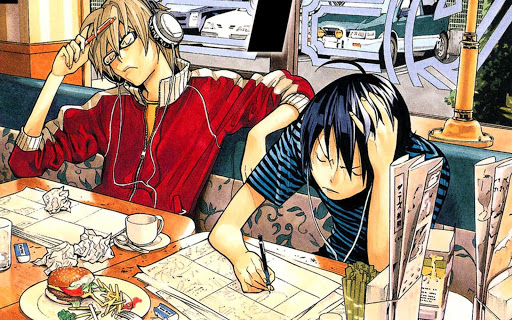 The Harsh Realities of Being a Mangaka

The series was highly praised for talking about the reality of the industry. With a lot of people being inspired by the wave of Shonen Jump series like Naruto, One Piece, and Death Note, there was an influx of people who became aspiring mangaka. This series showed their audience the amount of work that went into creating a successful series, and the struggles that come with trying to stay alive in popularity charts.

When it comes to the cutthroat mangaka industry, popularity is the only way to stay alive. While creating characters, storylines, and a general plot is excruciating in terms of the creative process, staying afloat in the popularity charts is the hardest thing to do. Why? Because the mangakas have no control over them whatsoever.

Throughout the series, we see Muto Ashirogi struggle with trying to rank high on the popularity charts. In some cases, they fail to stay relevant to the audience, and a few of their series do get canceled because of this.

While it is disheartening, Ashirogi doesn’t let a few cancelations stop them from creating, but it’s heartbreaking to see all of their hard work to end in cancellation. Especially when Mashiro was hospitalized as a result of overexertion.

Working Yourself to Death

In the series, Mashiro overexerts himself when writing one of their popular series, ends up in the hospital, and the manga goes on a one-week hiatus. During his time in the hospital, Mashiro works through his pain and finishes about five chapters for the series.

However, the series fell from popularity because of the one-week hiatus which resulted in the cancellation of that series. This shows how fragile the industry is and the strenuous amounts of work that go into writing these series.

A more serious depiction of this is that of Mashiro’s uncle, who died prior to the beginning of the series. His uncle was a mangaka who had a successful series that concluded. However, he had a hard time trying to create another series that would put him back into the public eye.

Like Mashiro, he overexerted himself creating series after series, but unlike Mashio, it ended up killing his uncle instead.

The thing that makes this scary is that it’s true; constant overexertion has killed mangaka. In the manga industry, we are used to seeing many mangakas take hiatuses because of health reasons. A prime example of this is Hunter X Hunter (HxH) mangaka, Yoshihiro Togashi, who has taken a multitude of hiatuses due to his health; someone created a chart showing the number of hiatuses he has taken since the release of HxH.

While it’s funny to see the differences between the manga’s hiatus and chapter releases, it shows the brutal labor involved in creating a series, especially one as popular as HxH.

The Camaraderie Amongst Mangaka

While it sounds like a dark series, it’s actually very wholesome. When Mashiro was hospitalized, the editors wanted to put the manga they were working on, Trap, on hiatus for a year. Upon hearing this, the other mangaka in the magazine threatened a writer’s strike.

It gets to the point where the magazine’s most popular mangaka threatens to go write for a different magazine until their return. The magazine has no choice to overturn their decision, preventing the strike. However, it doesn’t prevent Trap’s cancellation.

The series is a great look into the manga industry. While there are shows that also touch on this in a more lighthearted manner, this show doesn’t shy away from showing the realities that Tsugumi Ohba and Takeshi Obata experienced during their careers.

It’s almost autobiographical, and it’s a great series to watch if you want to know the behind the scenes that go on in the industry.

Bakuman Gets a Stage Play Adaptation