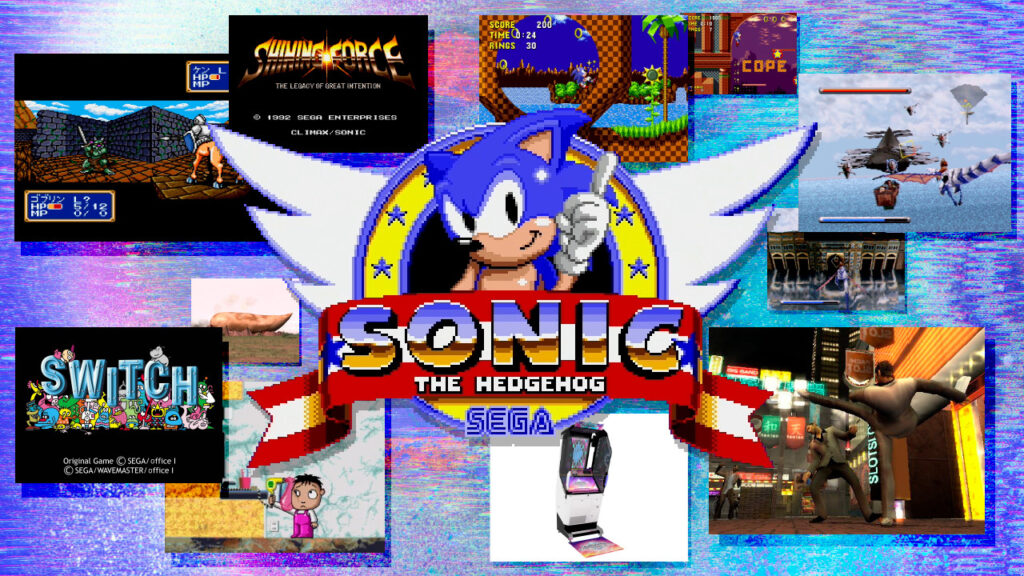 A Love Letter to SEGA: The Company That Shaped the Way I Play

Like many gamers my age I cut my teeth on the Nintendo Entertainment System. At the time they were a juggernaut in the world of gaming, having brought the industry back from the dead after the now legendary gaming crash of the early 80s. While at the top of their game, another company had plans up their sleeve to shake up the gaming world once again with the world’s first 16-bit gaming console.

For as much as I was a Nintendo kid in my earlier years, my household counted itself among the early adopters of SEGA’s Genesis console. My dad was an avid fan of sports games and got the system primarily for JOHN MADDEN FOOTBALL, my mom was obsessed with Ms. PAC-MAN. Those games didn’t interest me much as a kid, but then something new hit the scene and completely turned my world upside down.

SONIC THE HEDGEHOG changed the landscape of gaming in some wildly significant ways. The speed, the attitude, the music, the look. It was a whole new ballgame and one that was definitely only possible because SEGA was a company willing to take risks and try new things. This definitely wasn’t the first time they would go on to shake things up. For the next decade, they would be known for being forward-thinking and taking risks, for better or for worse.

I continued to staunchly support SEGA throughout the ‘90s. Even though I still had and enjoyed consoles from their rival companies, SEGA was constantly doing things that grabbed my attention in ways that others couldn’t. The SEGA CD, even despite its early emphasis on FMV games, was instantly on my wishlist when I first saw it in gaming magazines in 1991. I would go on to be obsessed with titles released for the add-on from SONIC CD, RPGs like the LUNAR series, Hideo Kojima’s SNATCHER, and even SEGA’s obscure and quirky masterpiece SWITCH (published in the US as PANIC! by Data East). Some of the titles released during this era continue to be favorites of mine to this day.

When support for the SEGA CD started to wane there was still plenty going on with the Genesis to keep me hooked. Games like COMIX ZONE, VECTORMAN, X-MEN 2, and the SHINING FORCE series occupied hundreds of hours of playtime, stealing the focus from other games of the era. SEGA had undoubtedly won the 16-bit era in my eyes and were paving the way for the 32-bit era long before the PlayStation was even a thought in my mind.

Savvy gamers would know the 32X add-on for the Genesis was the stepping stone for the 32-bit era, but much like the general gaming audience, I skipped over it in favor of the SEGA SATURN. The Saturn was a surprise release in 1995, which ultimately led to me getting it a bit later than the launch. That was probably for the best though because by the time I got my hands on one I already had generation-defining games like NiGHTS into Dreams, Castlevania: Symphony of the Night, and Capcom’s range of fighting games (which any real fan will tell you were often best on the Saturn thanks to its RAM expansion cart).

The Saturn wasn’t much of a success in the US, but thankfully it had an incredibly healthy lifespan in Japan, and the advent of the internet made importing games so much easier. This led me to explore a much wider range of titles than I may have otherwise. Titles like RADIANT SILVERGUN became an obsession and fostered a serious love for the shoot-em-up genre in my life. Anime fighters like ASUKA 120% BURNING Fest. opened my eyes to the wider scope of fighting games past TEKKEN & STREET FIGHTER, and the circuit edition of DAYTONA USA truly brought the arcade racer home. The Saturn era is often overlooked by western fans in light of so many great games being exclusive to Japan. It’s honestly a crime.

Then came the Dreamcast. Although every previous SEGA console had shown how forward-thinking the company was, the Dreamcast was the culmination of every time SEGA was far ahead of the curve or what gamers wanted. From online capabilities to the LCD screen included in the system’s VMUs, so many things about the Dreamcast and its features would shake up the gaming world and set the stage for the future of video games.

The Dreamcast was a master-stroke for the company from my perspective, and it’s a console I still play regularly to this day. Incredible 3D graphics for its time, online functionality, faithful ports of some of the biggest arcade games of the time. It had so much to offer the world right from the start. It’s a shame that it wasn’t meant to last. The death of the Dreamcast wasn’t the end of SEGA’s track record though, with the company opting to make games for Microsoft’s Xbox and Nintendo’s Gamecube after moving out of the hardware business, supporting the underdogs that were battling the PS2 and introducing fan-favorite titles like JET SET RADIO FUTURE, and BILLY HATCHER and the Giant Egg.

That was nearly 20 years ago now. If you take a look at the things SEGA has accomplished since they left the hardware business, you can clearly see this same sense of innovation and creativity in their third party offerings. The Yakuza series has become a runaway hit globally, they continue to experiment and play with the Sonic property to find a new path for the lovable blue hedgehog, brought back classic franchises through different means like STREETS OF RAGE 4 and the SEGA AGES series, and have innovated the music game space with their hit arcade titles like maimai and CHUNITHM.

SEGA’s willingness to experiment and take risks is what has allowed them to endure in my life as long as they have. Although there have always been missteps along the way, the level of creativity in all of their works has kept things fresh in my mind, and often time leads me to different gaming experiences as I at least try out everything they have to offer. As we celebrate their 60th anniversary we would be remiss if we didn’t celebrate this aspect of the company as well, for better or for worse. Keep the surprises coming SEGA, I’m happily waiting for them.