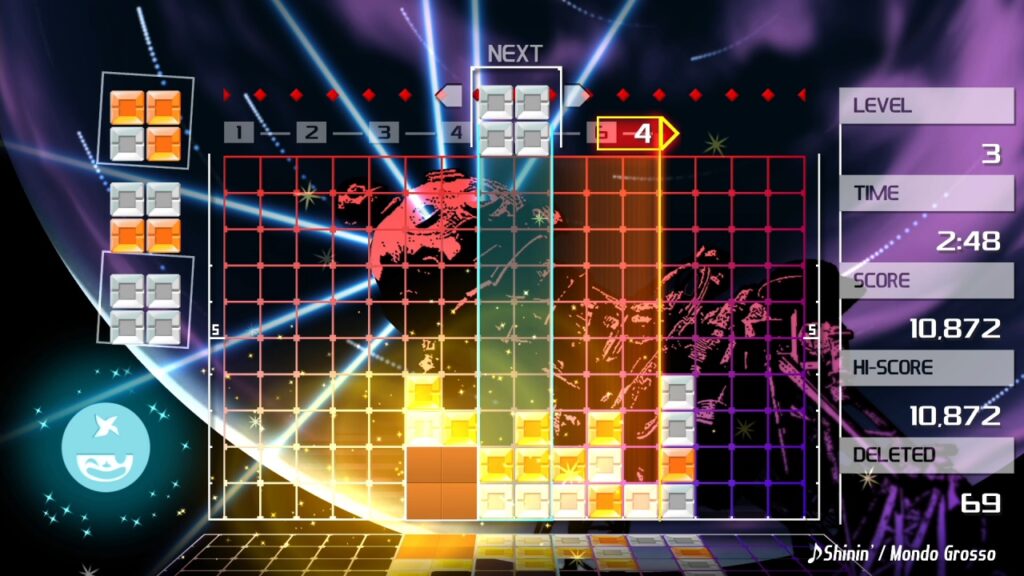 It’s been over a decade, but Lumines Remastered shows that block-rockin’ beats can keep on shinin’.

Lumines Remastered is an update to the 2004 PSP puzzle game Lumines. The Lumines formula evolved across five portable entries and two mobile entries, but this one takes everything back to basics. In Lumines, players use two colors create four-by-four squares of the same color. These squares clear when a line timed to the music passes over them. On occasion, a chain block will appear; these blocks clear all blocks of the same color that touch one another. Chain successful clears of three or more squares and rack up additional bonus points. Keep playing and the level increases, causing blocks to fall faster. Clear enough blocks, and the visuals and music change. If the blocks reach the top of the screen, the session is over. Lumines’ block-dropping formula is the rice to the curry sauce that is the audiovisual presentation.

Lumines Remastered is not a direct visual recreation of the original Lumines. The main menu UI and music/sound effects are brand-new and colorful, compared to the monochrome silver and white of the original Lumines’ menus. Every original skin from the original is presented up to 4K resolution. There some different details in the skins, and the Walkman-like graphics visible on the top of the main game UI are no longer present. 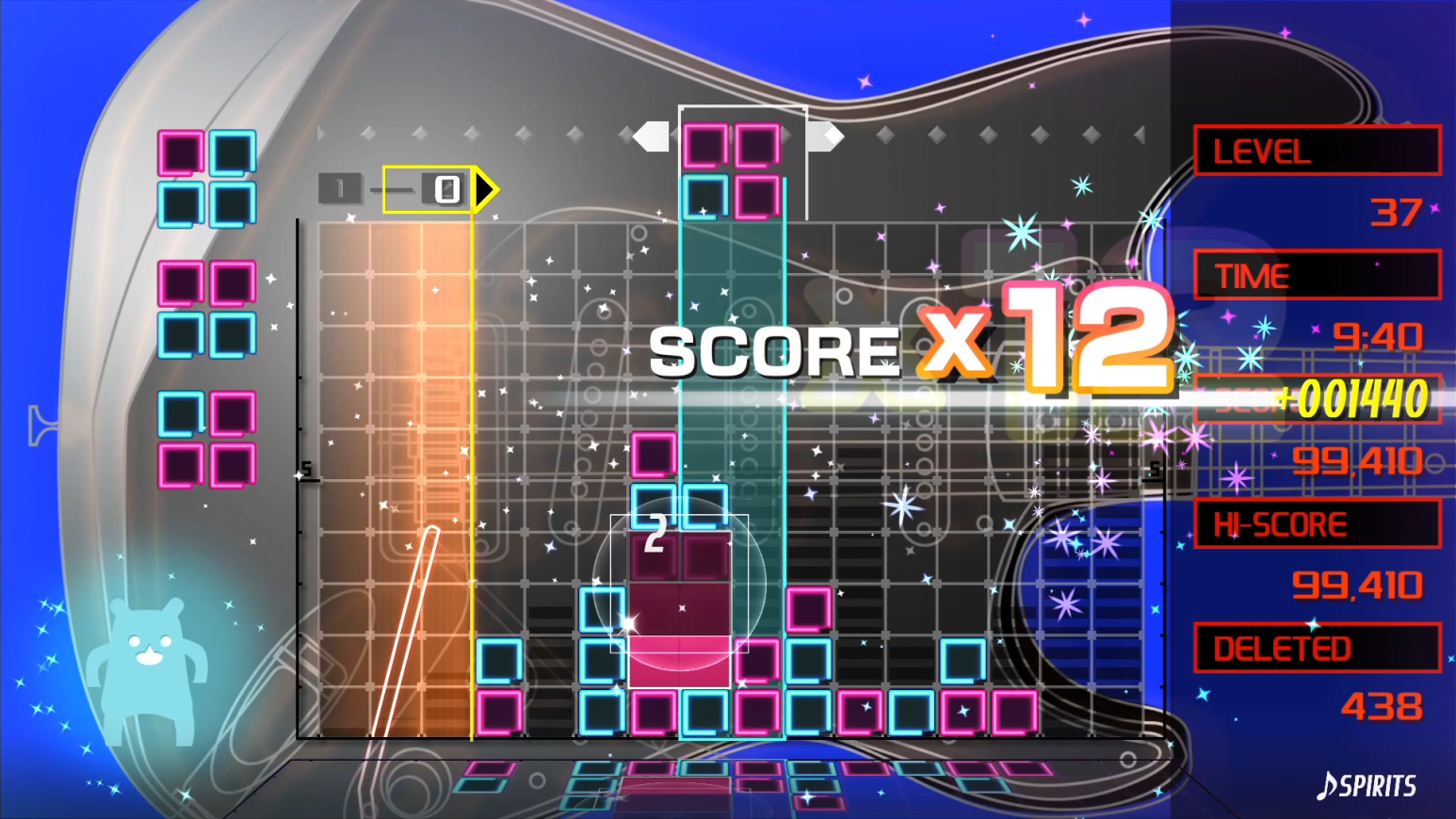 The soundtrack of Lumines Remastered is identical to the original Lumines. Of course, Shinin’ by Mondo Grosso is there, as well as the three other Mondo Grosso licensed songs. The game’s classic house grooves and occasional diversions to breakbeats and ambient music are still as eclectic as back in the day. The balance of Mondo Grosso’s glossy house tracks, Takayuki Nakamura’s techno, and graphic designer-turned-composer Katsumi Yokota’s homegrown beats still work well in the game’s favor.

It’s easy to lose an hour or two playing the various modes of the game: try to unlock songs in the challenge mode, race to clear blocks in the time-trial mode, exercise your brain in the puzzle mode, or challenge the CPU/your friends in local puzzle-territory battles. There are 40 skins and 44 in-game avatars to unlock, as well as multiple leader boards to conquer. Lumines Remastered has more than enough content to keep the blocks rotating and dropping. 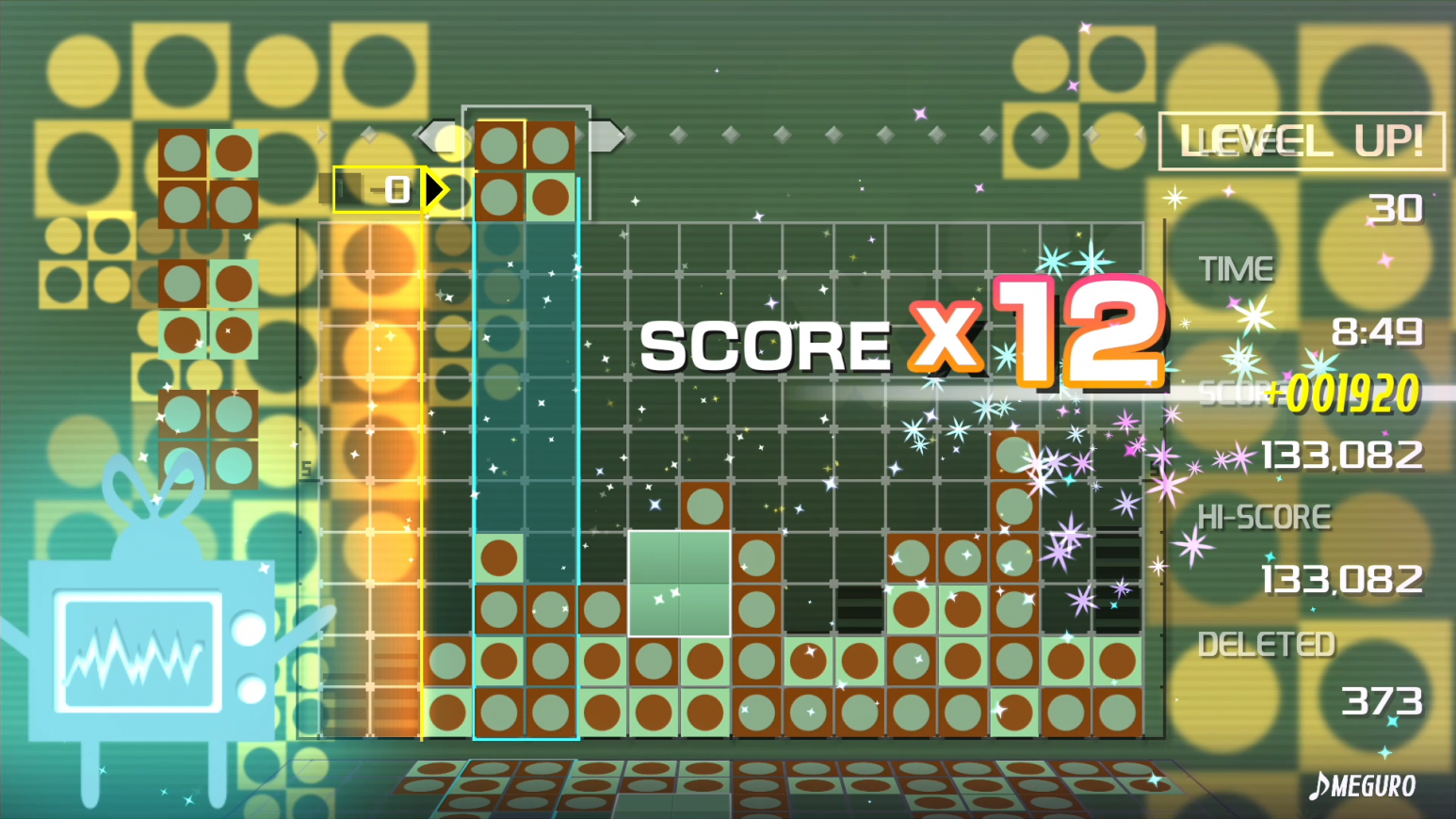 There are some minor improvements; akin to Lumines II, the challenge mode is split up into basic, shuffle and endless modes; the puzzle mode features puzzles present in Lumines II; and you can pick up to ten skins to play in sequence. Brand new to the game is a Rez-like trance vibration feature, available in the options menu.

The core gameplay of Lumines remains as addictive as ever, though its overall difficulty curve escalates quick. It takes serious skill and reflex to survive past level 40, and if chain blocks aren’t used well, the blocks stack up quick. The opponents in Vs. CPU become aggressive by CPU 4, ceding puzzle territory with alarming speed. It’s a relief that there are extensive tutorials and skill-tips available in the menu to help learn the mechanics.