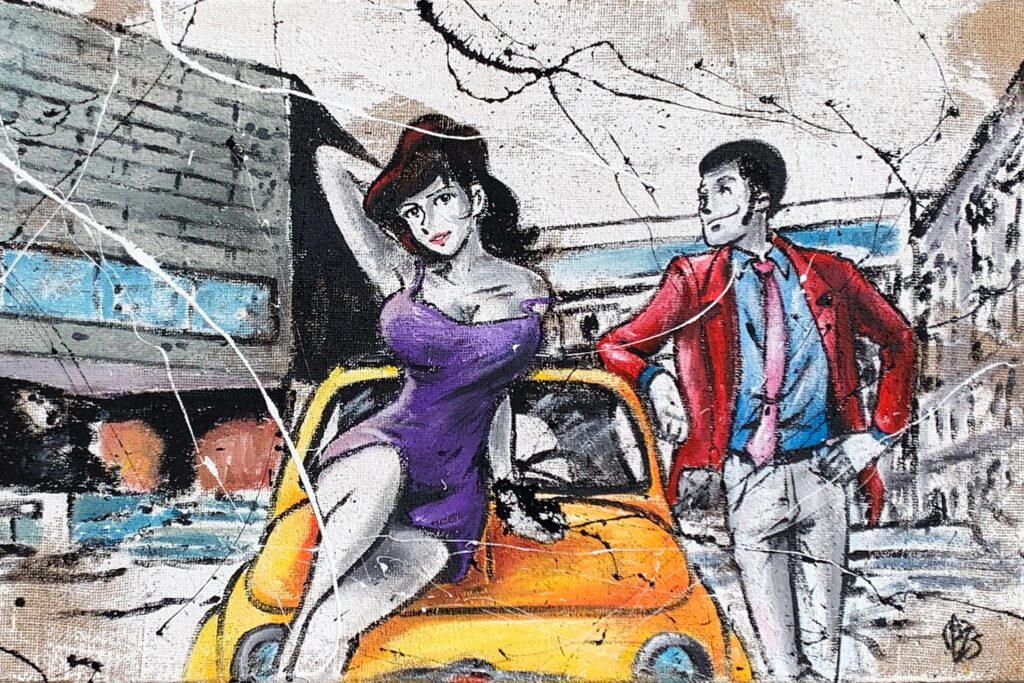 How to Watch Lupin the Third? A Brief Guide to the Lupin Anime

What is Lupin III? Well… In just a few words, it is one of the most important and well-known anime franchises, a sort of cross between the many tales of Robin Hood and The Pink Panther, with a little bit of Bugs Bunny thrown in for good measure.

Lupin, the franchise’s thieving hero, steals from the rich, but he is not necessarily giving back to the poor, and always seems to be able to escape the clutches of those who are hunting him. He is a clever and tricky gentleman thief, with a lot of disguises and a wicked sense of humor. 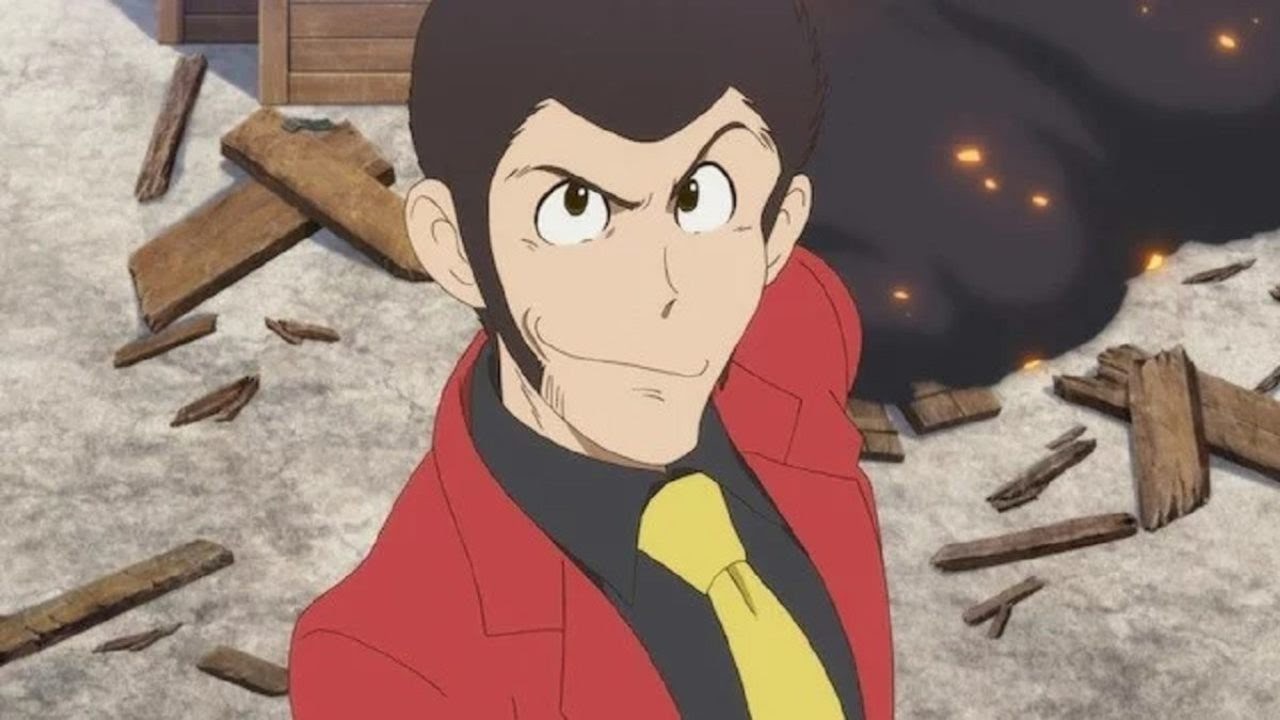 In 1967, Kazuhiko Kato, better known as Monkey Punch, created the character known as Arsène Lupin III (Lupin the 3rd, Lupin the Third). The franchise started with a manga, which ran from 1967 to 1969.

As the story goes, Lupin III is the grandson of Arsène Lupin, a French gentleman thief. In the real world, Arsène Lupin was a fictional character created by Maurice Leblanc in 1905, but in the Lupin universe, Lupin the First is apparently a real person, not a character from a novel. Lupin III continues his grandfather’s legacy, stealing items from all around the globe.

There have been five Lupin III anime series (called Parts), plus the spin-off anime The Woman Called Fujiko Mine, and numerous films, both animated and live-action.

The good thing about Lupin is that you can start anywhere. Any episode, any movie. The series does not follow a particular order, and the episodes are stand-alone stories.

Now, if you want me to provide a starting point, I would choose Lupin III: Part I (1971), the series that is at least chronologically the beginning. You can also check Lupin III: The Castle of Cagliostro (1979), which is the directorial debut of Hayao Miyazaki of Studio Ghibli.

Here is a handy list of all series, movies, and specials of Lupin:

With such a long list of anime shows and movies in the franchise, Lupin III has become part of the pop culture heritage of modern Japan.

Anime shows (and anime-influenced animated series in the United States) have made many references to various scenes from Lupin III (for example, driving up the side of a cliff in the Castle of Cagliostro), various characters, or Lupin’s distinctive outfit. Lupin characters have made cameo appearances in such series as Animaniacs.

When a character in FLCL asks, ‘do you prefer the green one?’ he is referring to Lupin’s many jackets. He starts out with a green jacket in the first series, switches to red in the second, wears pink in the third version (it’s totally ‘80s fashion for the 1984-1985 series) and blue in the fourth and fifth. His signature outfit is essentially always the same, only color-coded differently.

He has also been known to wear other jackets as well. TV Tropes even refers to the early shows as ‘Red Jacket,’ ‘Green Jacket’ and ‘Pink Jacket.’ 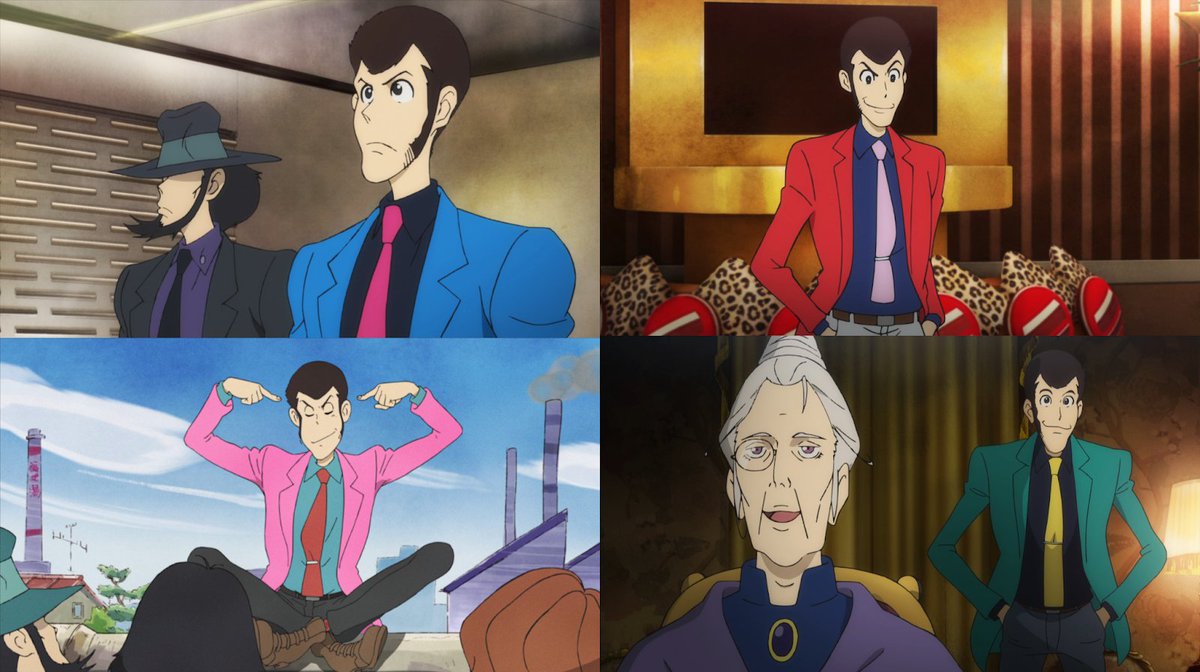 Many early anime episodes tend to have a simple plot:

1) Lupin wants to steal something
2) He puts together a complicated plot or scheme to steal it, although we never see all the planning.
3) With the help of his gang, he succeeds against all odds, and narrowly escapes Inspector Zenigata.

The loot can be something simple, such as gold bars from a Swiss bank. Or it can be outlandish, such as King Tut’s mask. Or even seemingly impossible, such as the 635 metric ton statue of Christ the Redeemer in Rio de Janeiro. (It involves a large helicopter.)

There was a huge gap between Part 3 (1984-1985) and Part 4 (201, not arriving in the U.S. until 2017). This meant that the new series was able to completely reboot the franchise, although it retained a lot of what made Lupin III fun to watch in the first place.

So, no more outlandish thefts of highly visible objects. The characters and their motivations are more believable. Lupin’s relationship with Fujiko is more strained.

The 21st-century episodes of Lupin III deal with issues that didn’t exist back in the ‘Red Jacket’ era. For example, is it possible to be a famous master criminal in a world dominated by social media? In Lupin the Third Part 5, our hero nearly gets caught by crowdsourced social media tracking him and ends up the target of a social media-fueled manhunt. He then turns the tables by creating a Wikileaks of sorts. It turns out that stealing information can be as interesting as stealing priceless jewels, art, and artifacts.

Because Part 5 is very social media-oriented, it adds a new character: Ami Enan, a hacker. 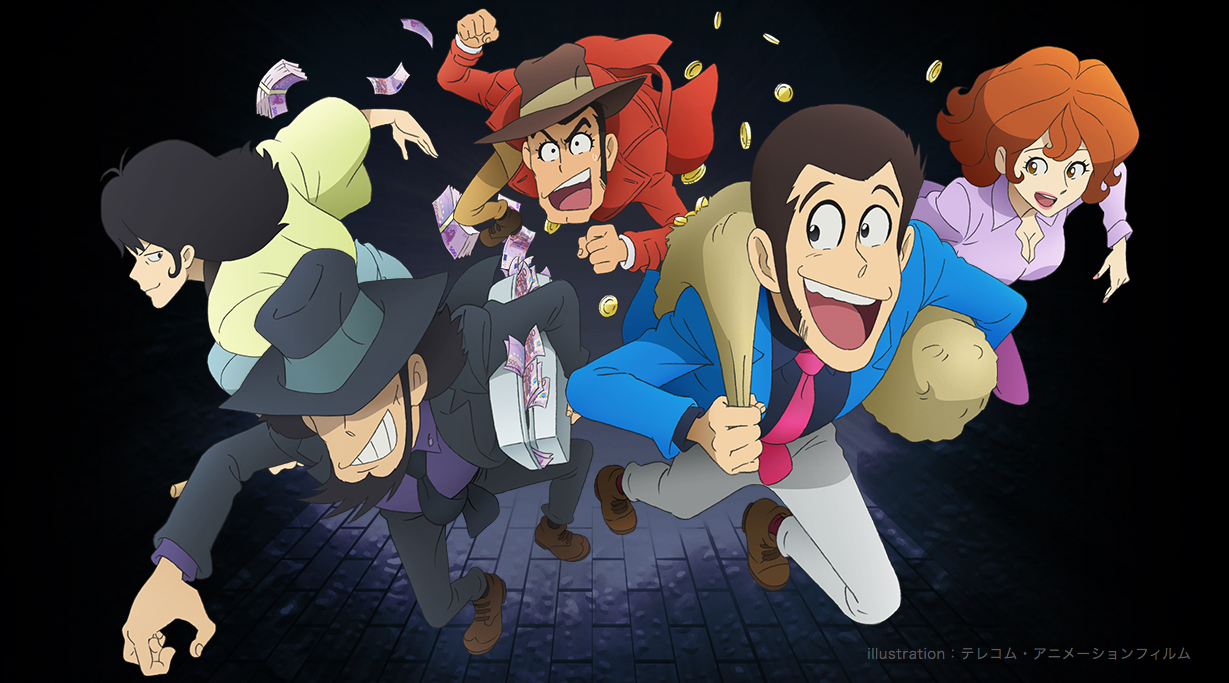 Of course, Lupin does not act alone. He is helped by his gang:

Inspector Zenigata has been a friendly enemy throughout most of the franchise. He relentlessly chases after Lupin, and doesn’t trust the criminal even when he hasn’t done anything wrong (lately). Yet, he seems to respect and know Lupin better than anybody else. He has even reluctantly helped when the two have faced a common enemy.

While Lupin III is the grandson of a famous thief, Zenigata is apparently named after a Japanese detective. (And, much like Lupin’s grandfather, Zenigata’s namesake is also fictional.)

Like many tricksters, Lupin III is a master of masks and disguises. His surprisingly good disguises have included Zenigata, Fujiko (complete with curves) and numerous other random men and women. Fujiko has also been known to wear a disguise or two when needed.

The Woman Called Fujiko Mine

More needs to be said about Fujiko, and she got her chance to shine in The Woman Called Fujiko Mine.

The spin-off is the only one where Fujiko is the main protagonist. It’s also a bit darker than the usual Lupin adventure. It’s a prequel to the main Lupin III story. She doesn’t know Lupin, and he is an obstacle to her at first. She also meets the rest of the gang for the first time. The artstyle is also a bit different from the rest of Lupin III. It’s very artistic and unique, with a lot of lines where another anime might normally try to simplify the art.

Another spin-off is The Blood Spray of Goemon Ishikawa. It’s a 53-minute one-off episode/ movie, which takes place in the same universe as The Woman Called Fujiko Mine. It’s a rare story which places Goemon in the spotlight. 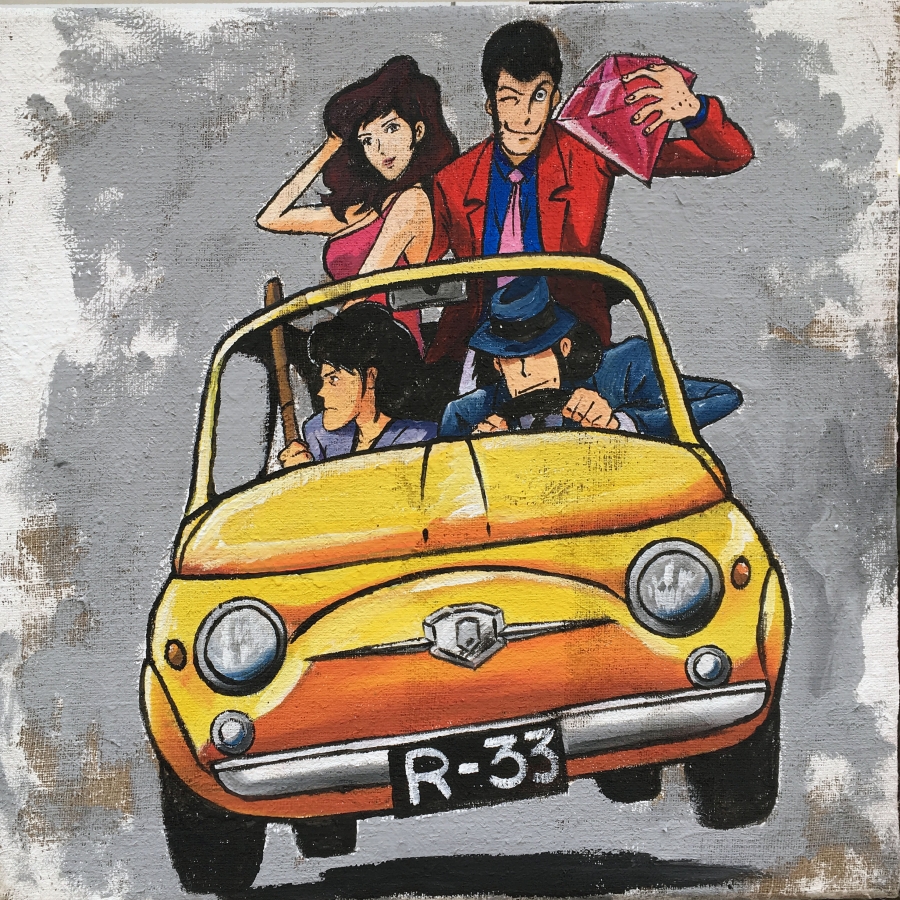 Crunchyroll has Lupin III Part 1, Part 2, Part 3, Part 4, and Part 5. Crunchyroll also had The Woman Called Fujiko Mine, but it got taken down. According to reports, Funimation’s license expired in 2018.

The Castle of Cagliostro

As you’ve seen in the list before, there have been many Lupin III movies. These include Lupin III: Strange Psychokinetic Strategy (a live-action film), the Mystery of Mamo, The Legend of the Gold of Babylon, Farewell Nostradamus, Dead or Alive, Lupin the 3rd vs. Detective Conan: The Movie, Jigen’s Gravestone, Lupin the 3rd (another live-action film), Fujiko Mine’s Lie and The First.

But of particular note is The Castle of Cagliostro, which is Hayao Miyazaki’s major addition to the Lupin story. (He also directed two episodes of Lupin III Part 2, and co-directed an episode of Part 1.)

Miyazaki is best known for beautiful-looking, fairytale-like fantasy stories such as My Neighbor Totoro, Kiki’s Delivery Service, and Spirited Away. But The Castle of Cagliostro is considered to be Miyazaki’s first feature film. The film marks a transition for Miyazaki. He had been involved in anime TV series, short films, and feature films before. The previous year, he had directed a TV anime series, Future Boy Conan (1978).

Yet, The Castle of Cagliostro is also not a Ghibli production.

The film is certainly different. It’s more of a swashbuckling adventure than a typical Lupin story, with a castle to storm and a beautiful maiden (in a wedding dress, no less) to be rescued.

Lupin wears a green jacket in this one.

Wherever you decide to start your journey, Lupin guarantees a good time with his thieving adventures.