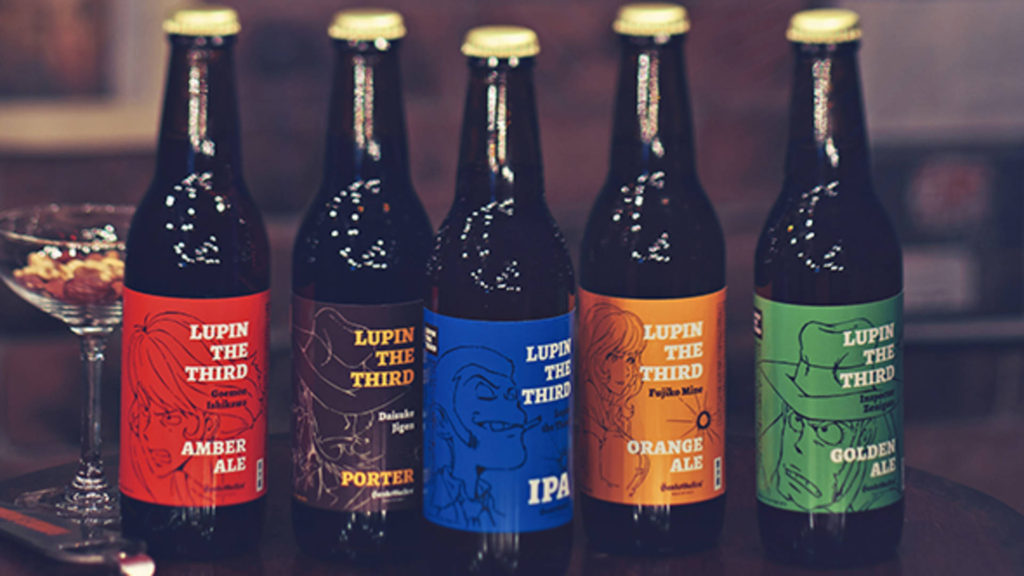 One of life’s greatest adult pleasures has to be grabbing a drink and watching some of your favorite anime; so it’s always great when these two worlds collide. There’s a short list of anime series that could pull off such a collision, but there’s perhaps none more fitting for an alcoholic crossover than that of Lupin the Third, a series that has always enjoyed an affinity for the finer things in life.

Sankt Gallen Brewery is one of the most iconic Japanese craft beer breweries, so it’s definitely a testament to the cultural significance of the Lupin series that they have decided to entrust five of their iconic beers to the Lupin crew by changing the labels of each beer during the period of the crossover to feature one of the five key characters. Furthermore, special crossover glasses will be available for purchase, which honestly wouldn’t look out of place in the fanciest bars in Ginza. But it’s not like they’ve just slapped the likeness of the Lupin crew onto the beers – each one of the beers matches the character in some way. Lupin will be on the brewery’s IPA, as it is one of the most famous beers – just like Lupin himself is the most iconic character of the series. Goemon will be on the Amber Ale, as it packs a punch behind it’s hoppy and flowery aroma, just like Goemon quietly hides his own strength behind his calm demeanor. Fujiko will be on the Orange Ale, which pairs her own flirtatious personality with the beer’s own juicy and fruity flavor. Zenigata will be on the Golden Ale, the brewery’s most easy-drinking beer, in accordance with his own straight-laced personality as a man of the law. Finally, Jigen will be on the brewery’s porter – rich and mellow in flavor, and black just like Jigen’s own sense of fashion. In addition, the crew will be making an appearance on Miyoshi Distillery’s sake, which has been consumed nationwide since the business’ inception in 1903. I don’t think anyone other than Goemon drinks sake in the series, but since this is Japan, it’d be a shame not to see the crew appear on the nation’s iconic alcoholic beverage. The same five characters will be appearing on the containers of the five different strength sake brews that the distillery has to offer, the lowest starting at 40% with Fujiko, and ending at 80% with Zenigata. While it’s a shame that there are no glasses on offer for the sake, the designs look pretty nice with the clear liquid. All of the glasses and alcohol are scheduled for release at the end of July, so if you’re interested in grabbing a drink with the Lupin crew – perhaps while watching the currently airing Lupin the Third: Part V – then definitely check out the official website for more details, here. I’m sure that Lupin would make a great drinking partner, although I do worry if I would be able to keep up with him.